Oak Grove Cemetery is a Victorian memorial garden-style cemetery first established in 1855. The design was inspired by the Mount Auburn Cemetery in Cambridge, MA, which was the first of its kind in the United States. Visitors come to the cemetery to admire its beautiful and peaceful landscape architecture. The burial ground is also home to many notable Fall River families and the infamous Lizzie Borden. It was added to the National Register of Historic Places in 1983. 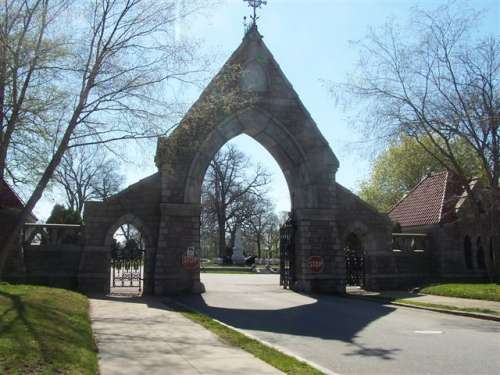 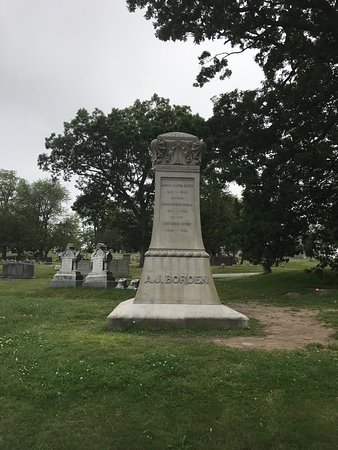 The City of Fall River purchased 47 acres from Dr. Nathan Durfee at a cost of $200 per acre (relatively high for the time).  The parcel is located in the northeastern section of the city which was still rather undeveloped in the mid-nineteenth century.  In 1866, the cemetery was enlarged for the first time.  An adjacent parcel was purchased (containing 28 acres) and added to the original burial ground.  Other purchases soon followed, increasing the size of the cemetery to nearly 100 acres.

Josiah Brown was selected to design the cemetery as a memorial park.  Previously, Brown had designed several of the mills located in Fall River.  He was inspired by the Mount Auburn Cemetery in Cambridge, Massachusetts to create a Victorian-style garden for the city’s deceased residents to rest in peace.

The Oak Grove Cemetery is renowned for its beautiful design.  It is also well-known because of its residents.  In 1866, 255 children were buried in the Oak Grove Cemetery.  The high rate of child mortality during this year is presumably due to cholera epidemic that broke out in the state that year. The most prominent citizens in Fall River were buried in the cemetery for decades.  The grounds showcase the names of some of the wealthiest families in the city’s history, including Mr. Durfee (from whom the land was purchased), the Borden family (including Lizzie, whose murder trial gained national attention) and the Davols.

The most notable spot in the Oak Grove Cemetery is the Borden family gravesite.  There is a high obelisk monument marking the burial of Andrew J. Borden, who was allegedly murdered by his own daughter, Lizzie, in 1892.  Lizzie was also accused of killing her stepmother, Abby.  Although she was acquitted of any wrongdoing and continued to live in the community until her own death in 1927, many area residents do not believe that she was innocent.  Lizzie, her parents and stepmother, and her sisters Emma and Alice, are buried together in Oak Grove.  There are small arrows painted onto the walkways to guide visitors to the population gravesite.

The Friends of the Oak Grove Cemetery is a non-profit group that was formed in 2007.  The mission of the group, comprised entirely of volunteers, is to take care of the cemetery’s landscape and to continue to honor the memory of those who are buried on its grounds.  Several years ago, the group’s president commented that many of the graves’ owners had contracted for “perpetual care;” however, issues with funding have made that kind of care nearly impossible. Nonprofits like the Friends of Oak Grove Cemetery continue to provide the care that our ancestors would have wanted.