Thomas Merton, also known as Father Louis Merton, was the author of The Seven Storey Mountain in addition to dozens of other books and hundreds of poems and articles. Born in France, Merton grew up mostly in the U.S. and England. While studying at Columbia University in New York in the late 1930s, Merton converted to Catholicism. Afterward, he decided to join the Trappists as a monk. His subsequent writings on religion, politics, and other subjects achieved a great degree of success. One year before his death, Merton bequeathed his photographs, manuscripts, letters, and other memorabilia to Bellarmine College in Louisville. In 1969, the college put its thousands of artifacts from the Thomas Merton Collection on display. Today, the Thomas Merton Center boasts the largest Merton collection in the world. 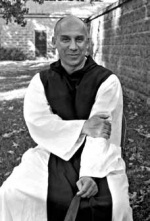 Thomas Merton was born on January 31, 1915 in Prades, France to a New Zealander father and an American mother; both were artists. While still an infant, Merton moved to the United States to live with his mother’s family. After her death from cancer in 1921, he went to school at the Lycée Ingres in Montauban, France. In the following years, Merton and his father bounced around between France, the U.S., and England. His father’s death in 1931 affected Merton profoundly and he went down a path he would later regret, spending much of his short time at Cambridge in 1933 drinking, getting into legal trouble, and not studying. His guardian, Tom Bennett, decided it would be best for Merton leave Cambridge and start anew in New York. Merton agreed, and he started his studies at Columbia University in 1935. There, three years later, Merton converted to Catholicism.

At the time, Thomas Merton had many interests, including poetry and politics, and was not sure what path he wanted to take in life. Merton’s interests in other religions introduced him to a Hindu monk named Mahanambrata Brahmachari. Though he expected Brahmachari to teach him about Hinduism, Brahmachari recommended that Merton read St. Augustine’s “Confessions” and Thomas à Kempis’ “The Imitation of Christ.” From there, Merton immersed himself into the study of Catholicism and began considering entering the priesthood. Unsure of what to do, Merton turned to a random Bible verse and read “Behold, you shall be silent” (Luke 1:20). Merton took this as a sign he should join the Trappists, or the Order of Cistercians of the Strict Observance. After a year of teaching at St. Bonaventure College, Merton arrived at the Abbey of Gethsemani in 1941.

In 1944, Merton made his simple vows with the monastery and published his first work, Thirty Poems. He continued writing and made his solemn vows in 1947. The following year he published his most well-known book, his autobiography The Seven Storey Mountain. In 1949, he became an ordained priest. Though Merton’s writings led to an upsurge in the number of postulants at monasteries across the nation and benefited his abbey financially, they took his time away from the common work that was divided among monks. One abbot made him the master of novices so that the work behind his lectures and writings might overlap. Still, a proper balance was hard to achieve, and Merton was eventually granted his request to live independently as a hermit on the Gethsemani grounds.

During the 1960s, Merton dedicated much of his time to two issues: race and peace. As such, he became a supporter of the Civil Rights Movement. Merton also continued to study Asian religions and philosophies. In 1968, he left his hermitage to meet with monks on the continent. The Dalai Lama commended Merton’s knowledge of Buddhism. Later in the year, Merton visited an area in Thailand near Bangkok. After speaking at a meeting of Asian Benedictines and Cistercians on December 10, he returned to his lodgings, where he was accidentally electrocuted by faulty wiring and died.

Part of Thomas Merton’s legacy was secured by Bellarmine University. In 1960, Merton had met with the university’s founding president Alfred F. Horrigan. The two became close friends, and Merton sometimes collaborated with Bellarmine faculty. In 1997, the university’s then-president Joseph J. McGowan moved the school’s Thomas Merton Collection to the top floor of the W. L. Lyons Brown, Jr. Library, which offered security, storage space, and staff who could digitize some of the recordings from the collection. More recently, an entire complex was created for the collection: The Merton Center.

8 A.M. to 5 P.M., Monday through Friday, except during holiday closures. In exceptional circumstances special arrangements are occasionally possible for groups who wish to visit the Center evenings and on Saturdays. Special arrangements should be request