The CSS Neuse was one of 26 ironclads constructed by the Confederate Government. This ship was built so it could assist in recapturing Union-occupied New Bern, thereby reopening the transportation networks of the lower Neuse River and Pamlico Sound to the east and northeast. Here in North Carolina, the navy completed four ironclads: the CSS Raleigh, CSS North Carolina, CSS Albemarle, and the CSS Neuse. The CSS Neuse was designed to carry out many plans in its future however, it would only travel a short number of miles up and down the Neuse river and never leave the river it was named after.

Blueprints for the design of the CSS Neuse. 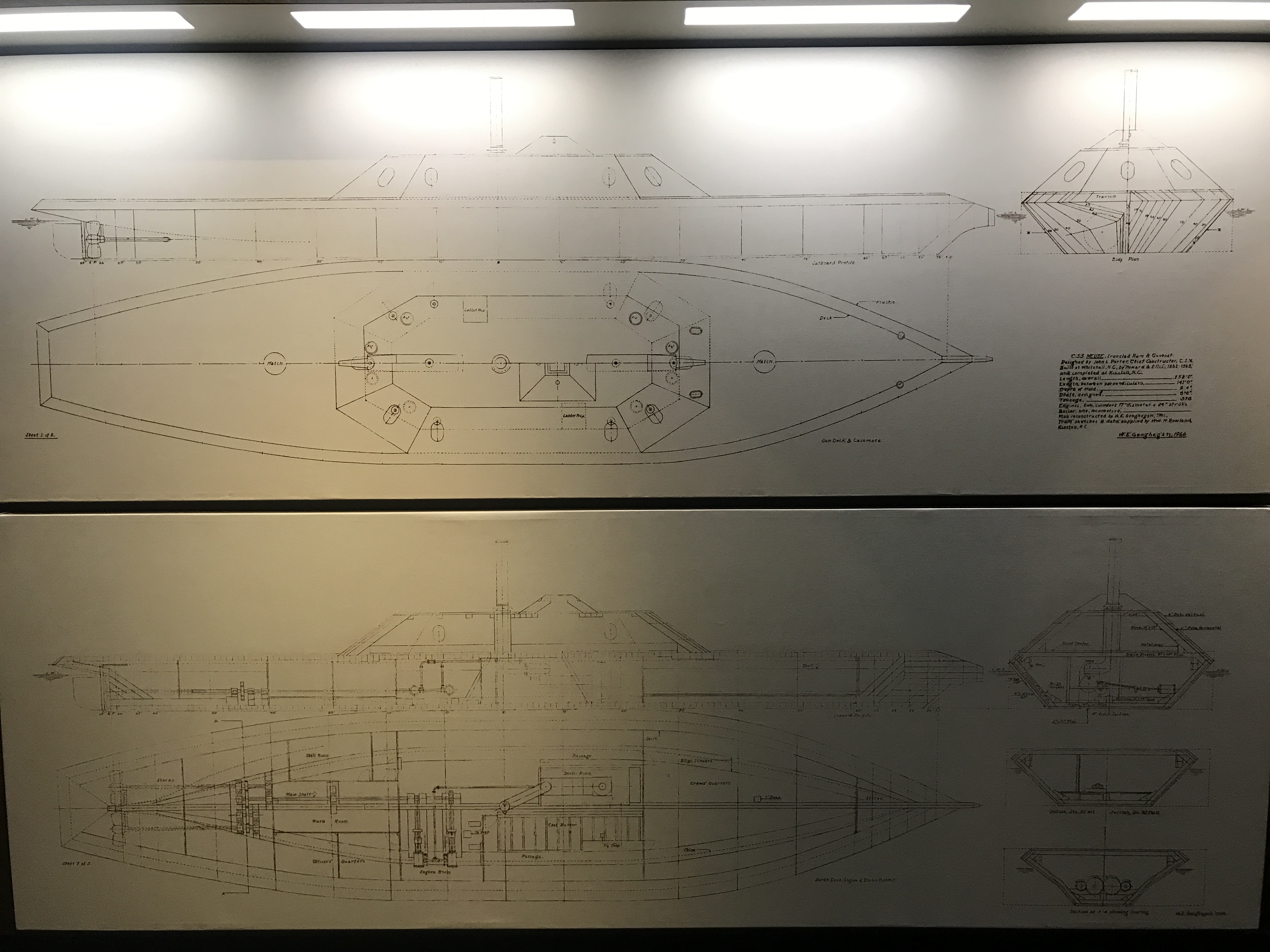 A sign at the building spot of the CSS Neuse in current day Seven Springs. 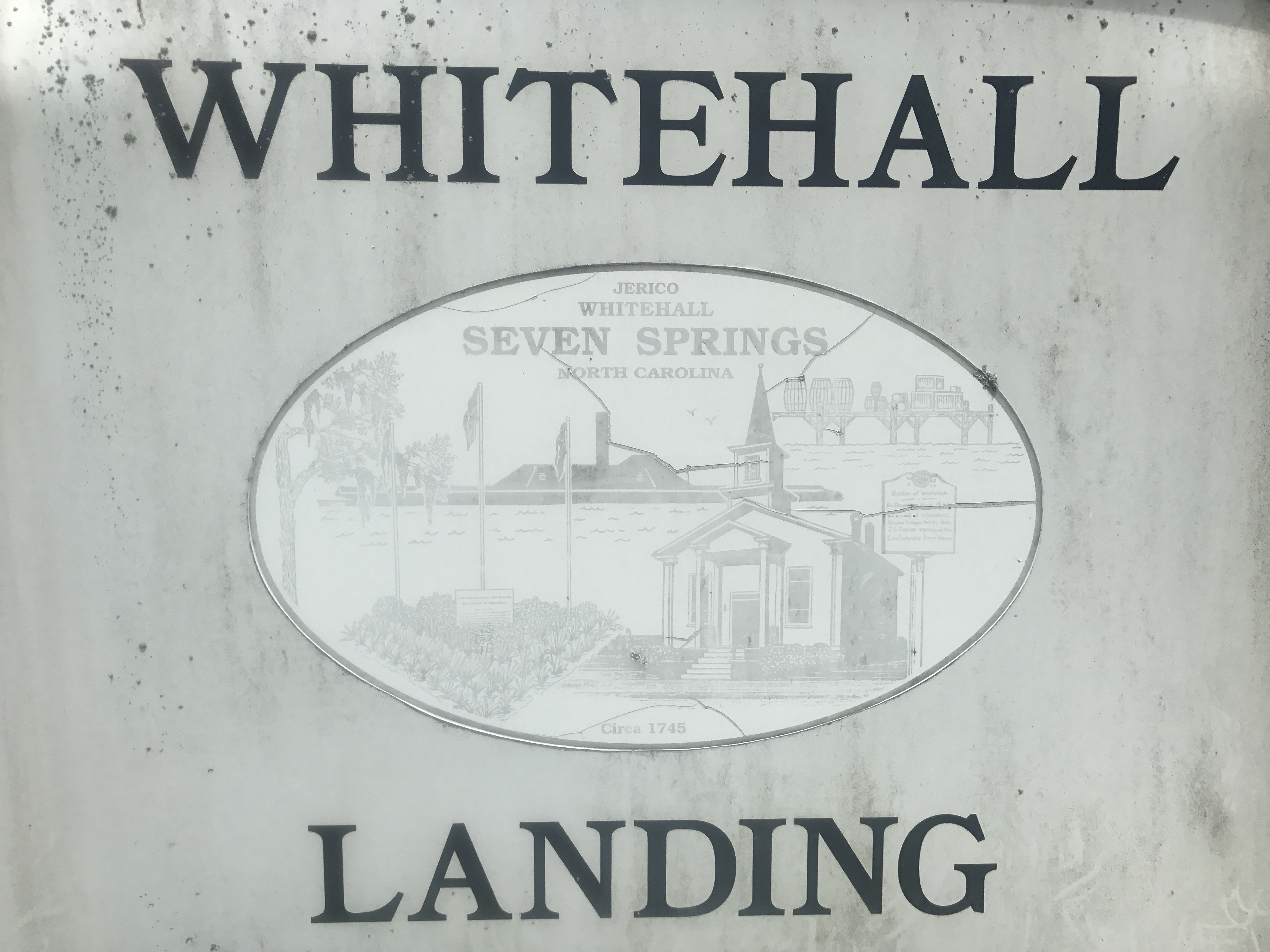 A Map of Kinston, NC and the location of the cat hole, where the ship was outfitted. 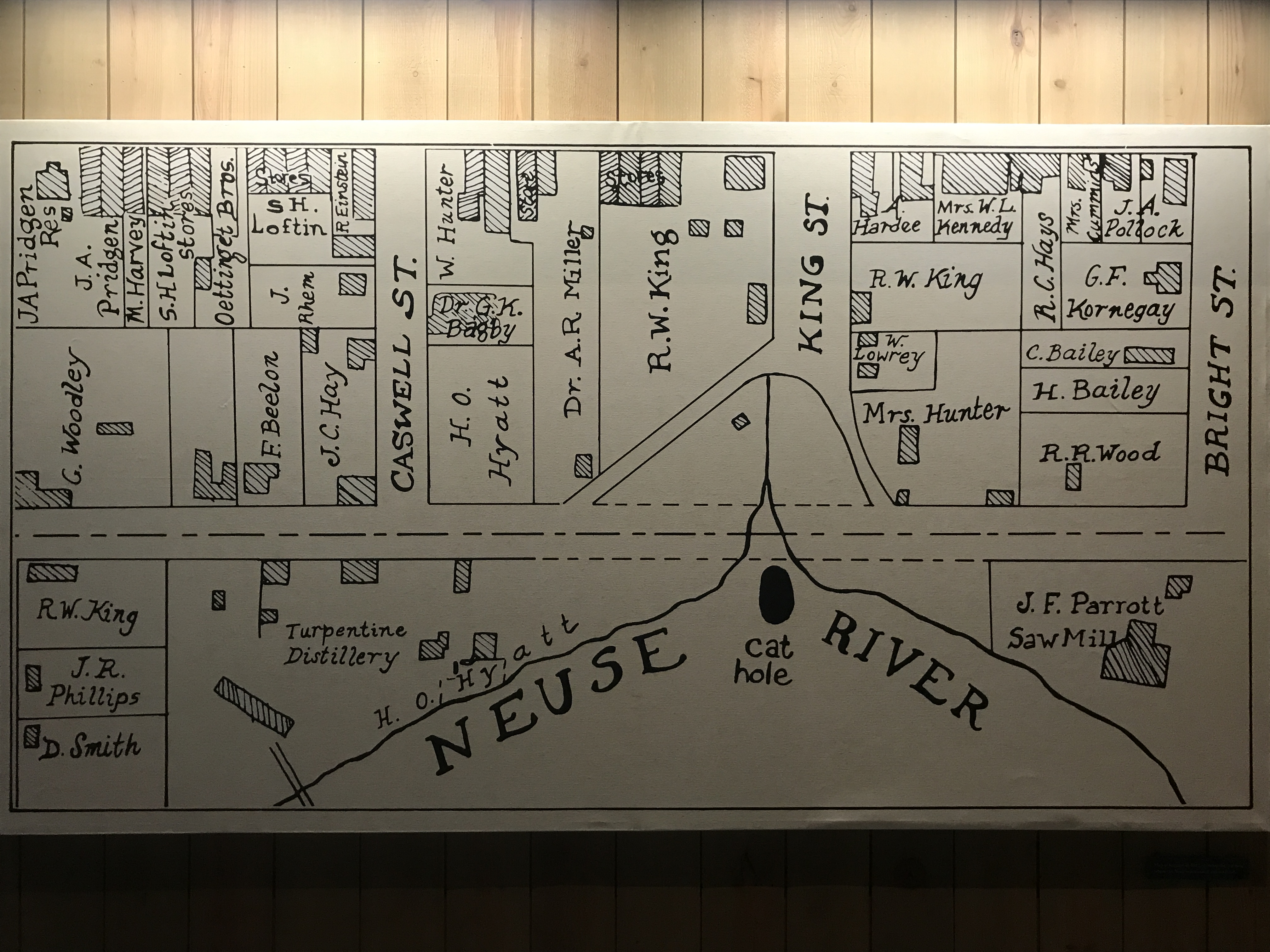 A small scale replica of the CSS Neuse. 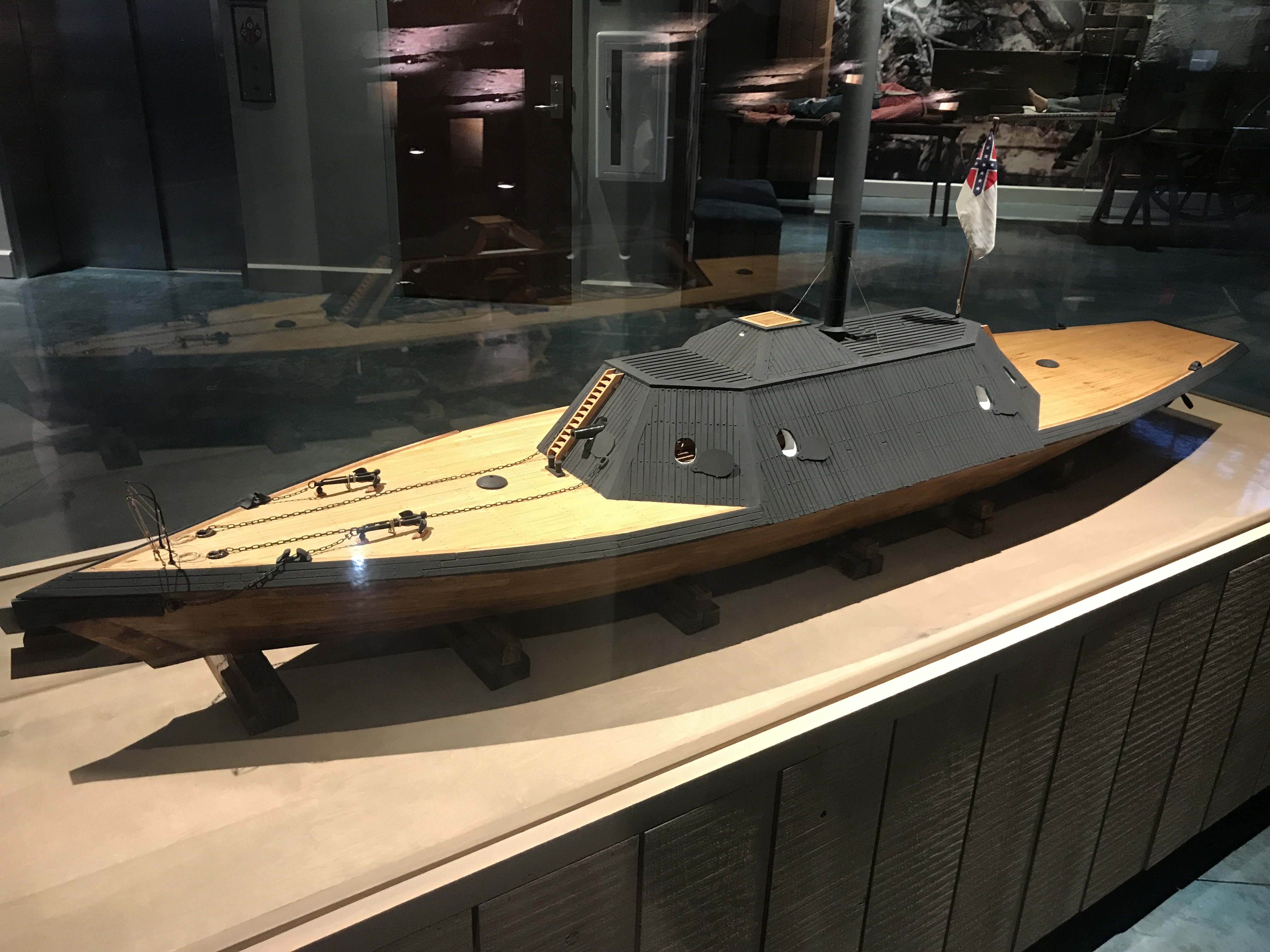 A painting of the burning of the CSS Neuse. "The Neuse is Scuttled, March 1865" by Stephen McCall. 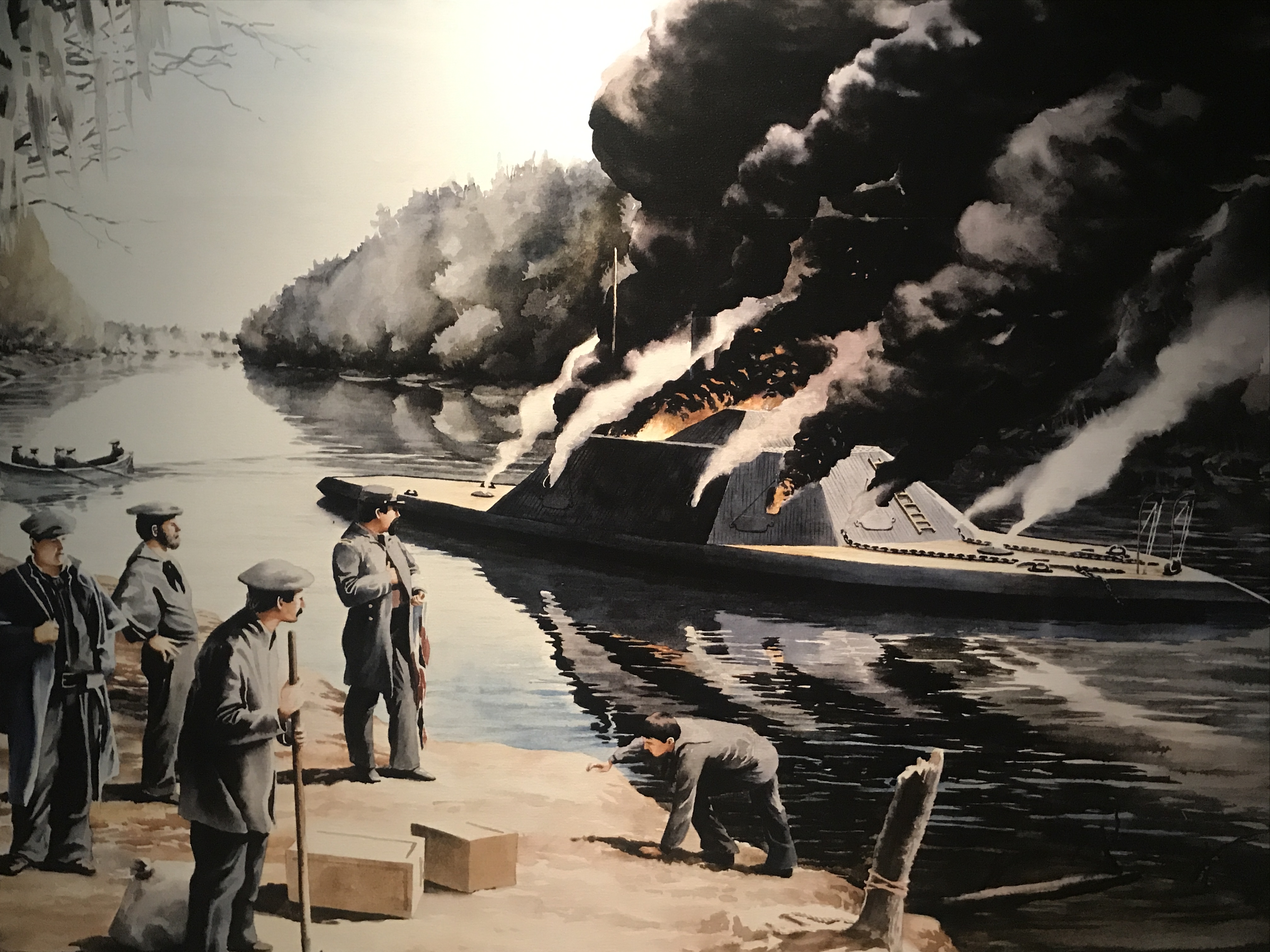 A picture of what remains today. The wooden hull is all the remains and white bars outline where the rest of the ship would be and what it would look like. 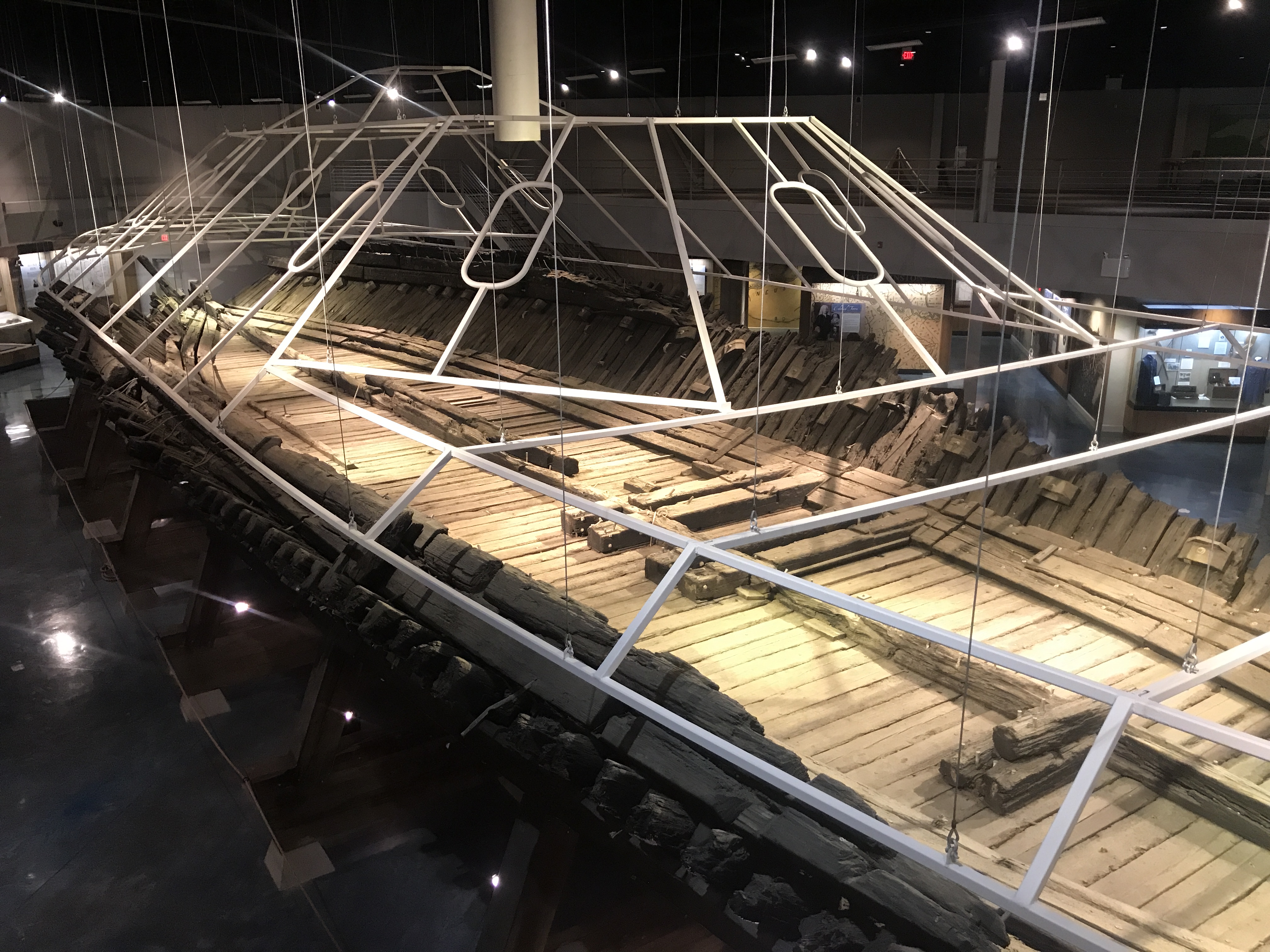 The life of the CSS Neuse has an interesting story and it begins back on October 17, 1862, when a contract was signed between the Confederate Navy Department and the shipbuilding firm of Howard & Ellis to construct an ironclad gunboat. The hull of the Neuse was to be completed by March 1, 1863. The ship was about 158 feet long, 34 feet wide, and consisted of two decks. The upper deck contained the casemate, where the pilot house and guns were stationed. The ship’s quarters, coal bunkers, boiler room, engine room, powder magazine, shell room, and storage areas were all on the lower deck. The Neuse was built on the diamond hull design, which only six other Confederate ironclads had. This designed appeared to be diamond-shaped when viewed form either end and the bottom of the ship was flat like a barge, allowing it to operate in the shallows North Carolina rivers and sounds. At the bow, a ram was formed using a wooden extension of the stem at the waterline.

Work began on the CSS Neuse shortly after the contract was signed and its construction began on the banks of the Neuse river in Whitehall, which is now current day Seven Springs. However, a couple of months into construction, Union Gen. John Foster marched from New Bern on December 11, 1862 and captured the town of Kinston on the December 14. The next evening, he reached Whitehall and encountered Gen. Beverly Robertson’s Confederates setting fire to the bridge over the Neuse river to protect the building of the ship. A short battle occurred, known as the Engagement at Whitehall on December 16. Foster soon withdrew his force and continued marching to Goldsboro after encountering how well the Confederates forces were entrenched. The CSS Neuse was slightly damaged however, once Union forces let the area construction resumed. In late summer of 1863 the initial hull of the ship was completed and it was guided down the river to Kinston to be fitted with its fittings, machinery, and iron plating, engines, propellers, and cannons. When it arrived in Kinston, it was moored in a site referred to as the “cat hole.” This was a deep area of the river located against the steep riverbank, allowing the ship’s machinery to be lowered easily into the hull. This cat hole today is adjacent to where the King Street bridge. After months of delays the CSS Neuse was deemed ready and on April 22, 1864 it set sail from Kinston to recapture the town of New Bern. It was planned for the ship to meet her sister ship the CSS Albemarle however, the Neuse had moved one-half mile down the river when it ran aground on a sand bar. It was not until mid-May that the river rose high enough and the ship was freed. Instead of continuing to New Bern, it returned to Kinston where it would have to remain.

General Lee ordered men in the area to Virginia, leaving the Neuse in Kinston without troop support so the ship and its crew would remain stationary. In 1865 after the defeat at the battle of Wyse Fork, three miles east of Kinston from Union forces, Confederate Gen. Braxton Bragg ordered the evacuation of Kinston and the order to destroy the CSS Neuse so it would not fall into enemy hands. On March 12, 1865, the crew set fire to the ship where she sank and remained for nearly 100 years. With the centennial of the Civil War approaching, a renewed interest in the CSS Neuse emerged and attempts were made to salvage the ship. In the summer of 1963 the ship was finally pulled from the river and it would not be until May 1964 before it would be transported to the Governor Richard Caswell Memorial State Historic Site. It would in fact remain there until June 2012 when the CSS Neuse Civil War Interpretive center would be ready to be her final resting place. It is now currently located just two blocks away from the cat hole where the ship was originally outfitted in 1863. The journey of the CSS Neuse is a very interesting story when looking back into the history of the Confederacy and North Carolina. This ship had high hopes, but would only travel a couple of miles in its entire life.

An Overview of the CSS Neuse, N.C. Department of Natural and Cultural Resources: https://youtu.be/M6fksiJUZX4