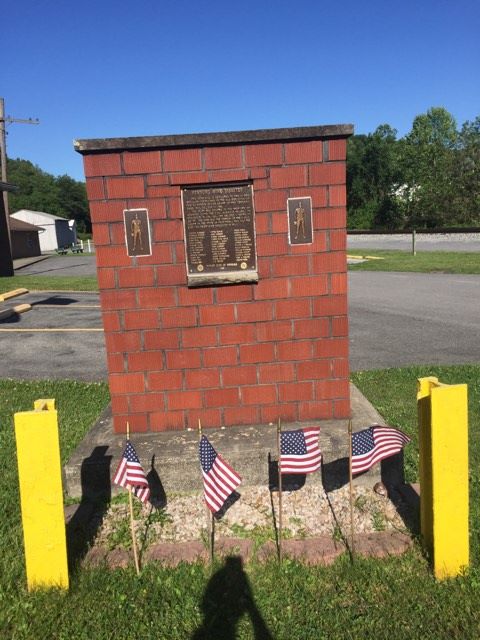 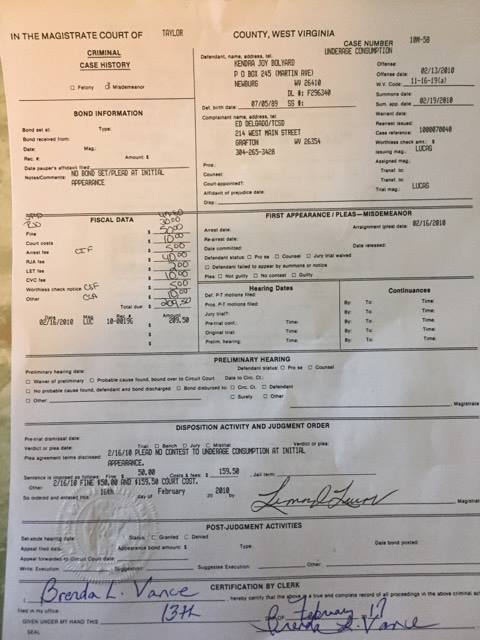 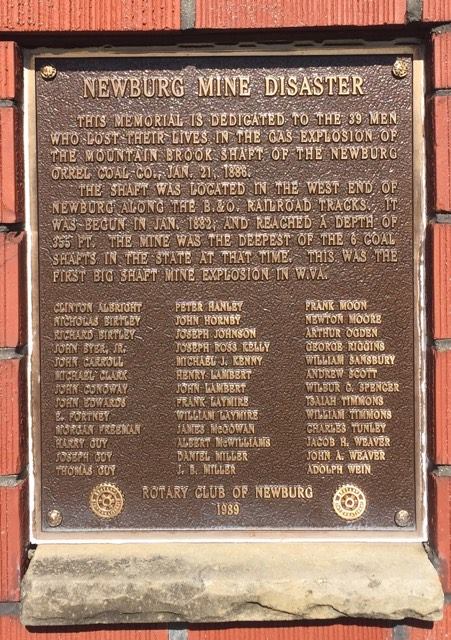 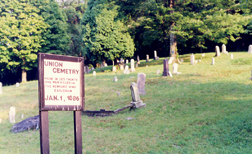 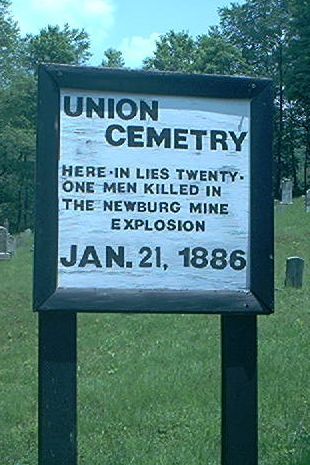 On Thursday, January 21, 1886, the first big mine shaft explosion occurred in the state of West Virginia, at the Mountain Brook Shaft Mine of the Newburg Orrel Coal Company. According to the Preston County Journal, it was around 2:45 p.m. when there was an explosion of gas accompanied by "a rumbling sound like low, rolling heavy thunder, followed by a slight shaking of the ground."1 The townspeople gathered to witness the horrific event; the process of recovering the 39 human bodies and four mules lasted an entire week. The first body to be identified was Isaiah Timmons, who was the pit and fire boss. His son, William (age 14), who was the door keeper in the shaft, was also killed. Many family members worked together in the mine. The cause of the disaster was ruled as neglect of orders and disobedience of the law.1

Although the actual site of the disaster is not accessible, a memorial, dedicated by the Rotary Club of Newburg in 1989, is located outside of the Newburg Post Office. It reads:

THIS MEMORIAL IS DEDICATED TO THE 39 MEN WHO LOST THEIR LIVES IN THE GAS EXPLOSION OF THE MOUNTAIN BROOK SHAFT OF THE NEWBURG ORREL COAL CO., JAN. 21, 1886

THE SHAFT WAS LOCATED IN THE WEST END OF NEWBURG ALONG THE B.&O. RAILROAD TRACKS. IT WAS BEGUN IN JAN. 1882, AND REACHED A DEPTH OF 335 FT. THE MINE WAS THE DEEPEST OF THE 6 COAL SHAFTS IN THE STATE AT THAT TIME. THIS WAS THE FIRST BIG SHAFT MINE EXPLOSION IN W.VA.2

Union Cemetery is located near the old Newburg School and is the final resting place for 21 out of the 39 miners.3 The other men, except for a few who were from out of town, were laid to rest in a nearby cemetery on Scotch Hill.4

Newburg, West Virginia, a town in Preston County, was incorporated in 1868. It was presumably named because it was the most recently established town on the Baltimore & Ohio Railroad (B&O). Newburg was formerly known as "Stop 88" as it was located 88 miles west of the B&O station at Cumberland, Maryland. 5

This coal history tour starts in the western side of the Fairmont Coal Field and works its way north and east before turning south to complete a half-circle. The tour consists of monuments, museums, memorials, and other sites related to the history of mining and life in the minefields in the six counties in Northern West Virginia that constitute the Fairmont Coal Field: Barbour, Harrison, Marion, Monongalia, Preston, and Taylor Counties.