Bryan’s Station was established by William Bryan and members of his family in 1779. The family left the fort after the deaths of William Bryan and one of his sons in two separate raids by Native Americans. Bryan’s Station then became the site of a famous battle during the Revolutionary War. A group of British, Loyalist, and Native American forces tried to take the fort but were defeated by the pioneers and their reinforcements. However, the British and their allies were successful at the subsequent Battle of Blue Licks about sixty miles from Bryan’s Station.

A historical marker about Bryan's Station 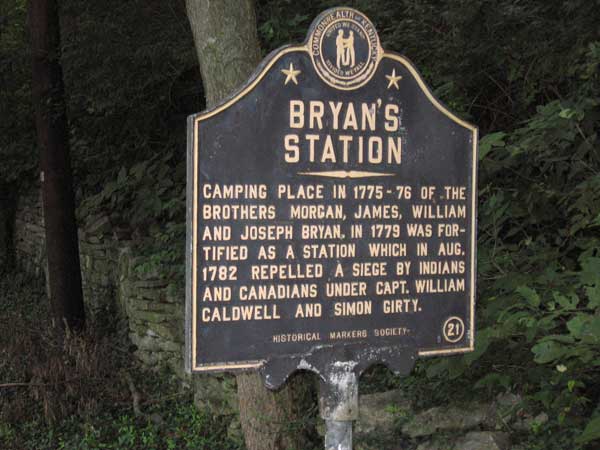 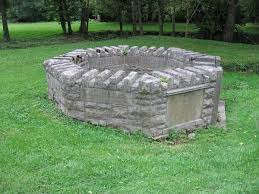 William Bryan was born near Winchester, Virginia. In 1755, he married Mary Boone, sister of pioneer Daniel Boone. For a time, the couple lived on land in North Carolina owned by his family. Eventually, William and his brother Thomas became interested in Daniel Boone’s expeditions to Kentucky. They joined a party that set out for Kentucky in September 1773 but returned after Boone’s sixteen-year-old son was killed in an attack by Native Americans. Indeed, because of the tension between the American colonies and Great Britain at the time, pioneers could not be guaranteed military protection when traveling to new territories.

After the Declaration of Independence in 1776, those who wanted independence and those who did not (Loyalists, often called Tories) were at odds with each other. Many members of the Bryan family sided with the crown, leading to some friction at their home in North Carolina. The idea of starting anew in Kentucky began to sound appealing. In 1779, William Bryan and other male members of his family went back to Kentucky and started building cabins and a stockade at Bryan’s Station. Once a basic settlement was completed, the Bryans returned home for the rest of their clan and then journeyed back to their new homes.

Bryan Station is located on top of a hill, allowing its residents to see below in case of attacks. The family also continued to construct a stockade that would surround the station for additional protection. While doing this work, the Bryans found out that some of the land they had claimed already belonged to a Virginian speculator. This blow would later factor in the family’s decision to abandon the place. Another factor was the increase in raids by Native Americans. In 1780, sixteen-year-old William Bryan, Jr. was killed in one such attack, as was his father just weeks later. The family made their way back to North Caroline, though they each eventually came back to eastern Kentucky.

In 1782, an army of British, Loyalist, and Native American soldiers attempted to destroy Bryan’s Station, which was being used by another group of frontiersmen. After a trick to draw the pioneers out failed, two of the Station’s residents made it out and called for reinforcements. The attackers failed at Bryan’s Station but had better luck nearby. Kentuckians then led a series of attacks on Native American tribes in southern Ohio. However, as the Revolutionary War wound down, there were fewer attacks by both British and Native American forces.