Unveiled on July 4, 1924, in Frankfort, Kentucky, at Greenhill Cemetery, stands a 14-foot monument dedicated to African American men who fought in the Union Army. 142 names inscribed on the limestone obelisk represent a small portion of black men from Kentucky who served the Union Army during the War Between the States. Estimates of 25,000 to 27,000 black men from Kentucky enlisted in the Union Army after the Emancipation Proclamation failed to reach the Confederate States. The Border States, such as Kentucky, became enlistment headquarters for black men willing to join the Union Army. “By the end of the war 180,000 black men served in the army with an additional 24,000 serving in the Navy.” The significance of black soldiers to the Union Army was crucial to winning the war and reshaping national opinions about African Americans. During the war, and in the aftermath of the war, monuments to soldiers were erected to honor fallen soldiers. However, very few monuments erected memorialized or celebrated the heroism of African American Union soldiers following the Civil War and heading into the twentieth century. 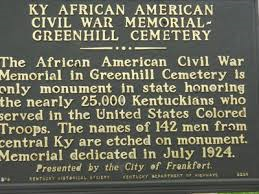 The Greenhill Monument bearing the names of 142 African Americans from Central Kentucky who fought in the Civil War. 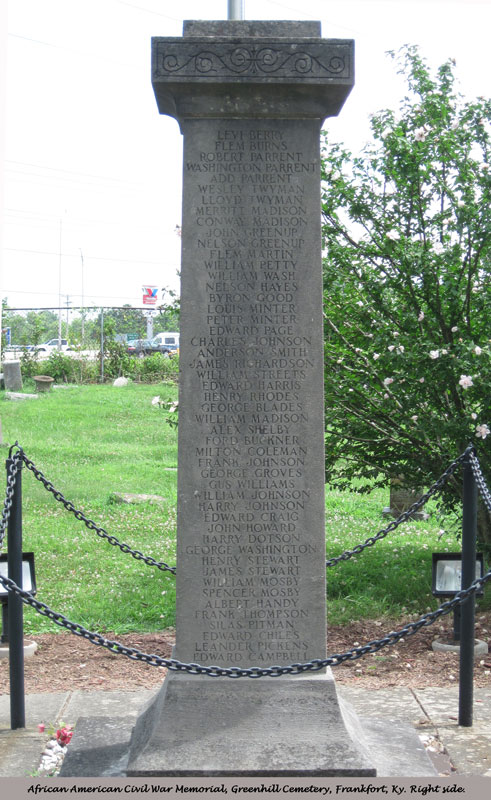 Monument building and dedication ceremonies to honor military accomplishments following the Civil War sparked a movement to preserve the historical memory of veterans of the War Between the Sates. From 1897 to 1924 only four monuments existed that honored black Civil War soldiers. In the midst of the Civil War, Union soldiers fighting at Stones River near Murfreesboro, Tennessee forced Confederate troops into retreat after a bloody battle. By June of 1863, Union troops under Colonel B. Hazen’s brigade erected a limestone monument at the battlefield of Stones River to honor the fallen Union soldiers. A year later on July 4, 1864, Union soldiers erected a marble obelisk at Vicksburg to commemorate the first anniversary of the Confederate Army’s surrender of the strategic city. Union soldiers during and after the war began erecting monuments to commemorate the sacrifices soldiers made in ending slavery and preserving the Union. On June 11, 1865, Union officers and residents of Washington D.C. boarded a train to Manassas, Virginia the former site of the Battle of Bull Run. Though Union forces suffered multiple defeats there, Union soldiers quickly erected a monument to celebrate the Unions victory. The monument erected at Bull Run was the first postwar monument dedication ceremony. Though, Union veterans quickly erected monuments to honor fallen soldiers, African American Union soldiers were left out of dedication ceremonies, and entered a period where black soldiers were forced out of historical memory.

Further exclusion of African American soldiers continued after the Union won the war. The celebration parade held in Washington D.C. prohibited African American soldiers from marching in the parade. A man who lived a remarkable life, George Washington Williams an African-American from Pennsylvania joined the Union Army at 14, fought in various battles, went to Mexico and joined the forces who overthrew Maximilian, became an advocate for black Civil War veterans. Williams returned to the United States and enlisted in the Tenth Calvary, one of four all African American regiments of the United States Army. By the 1880s, Williams strongly advocated the erection of a monument dedicated to black Civil War soldiers that would stand in front of Howard University. Unfortunately, Congress rejected Williams’s efforts to construct a monument dedicated to black Civil War soldiers. Williams continued to advocate the commemoration of black Civil War veterans through his second published book in 1887, A History of Negro Troops in the War of the Rebellion. Despite Williams’s efforts of getting a monument dedicated to black soldiers was declined by Congress many groups following the Civil War continued to preserve the historical memory of black soldiers.

“On Decoration Day, May 30, 1870, the Colored Women’s Lincoln Aid Society of Philadelphia laid the cornerstone of a two-thousand dollar “Monument to those [black soldiers and sailors] who fell fighting to perpetuate our glorious Union.”[1]  Throughout the 1870s and 1880s groups such as Baltimore’s Black Lincoln Post of the Grand Army of the Republic (GAR) attempted to raise money for a monument to black soldiers which never came to fruition an unfortunate pattern that quickly emerged following the Civil War. However, many black newspaper editors wrote editorials to counteract the expulsion of black soldiers from historical memory. As historian Mitch Kachun stated: “history conscious leaders Charles Hendley, editor of the Huntsville Gazette, urged on the current generation the necessity of commemorating and paying homage “to the brave colored boys in blue, who were on the battlefields of the late war and risked life and all fighting for liberty.”[2]  Many groups following the Civil War continued to advocate for the erection of monuments dedicated to black Civil War soldiers throughout Reconstruction and well into the Jim Crow era. As black military service was being erased from historical memory during the Gilded Age a disproportionate amount of monuments dedicated to white Civil War veterans covered the American countryside.

Historian David W. Blight stated: “By the 1890s, on battlefields, in cemeteries, and in city squares, the American landscape contained thousands of Civil War monuments, many of them designed to fit artistic formulas.”[3]  Union and Confederate veterans continued to erect monuments and conduct commemoration ceremonies while African Americans continued to preserve the historical memory of black military service. Starting in 1883, Joshua Benton Smith, a prominent black businessman from Boston, started a committee of prominent Bostonians to erect a monument commemorating Robert Gould Shaw and the 54th Massachusetts Regiment. However, 14 years passed before the Shaw memorial was unveiled on May 31, 1897. The disproportionate rate of monuments dedicated to white soldiers compared to black soldiers continued throughout the twentieth century. Another monument celebrating African American soldiers came in 1906 in Norfolk, Virginia. The West Point monument was commissioned in 1906 and completed in 1920. During the summer of 1924 in Frankfort, Kentucky, two monuments were erected in the Greenhill Cemetery, one to the former Confederate President Jefferson Davis, and one for the thousands of black Union soldiers from Kentucky.

“On July 4, 1924, less than a month after the dedication of Davis’s monument, another Civil War monument was dedicated in the Green Hill Cemetery, in Frankfort, Kentucky. The work of black Women’s Relief Corps. No. 8 of the GAR, it honored African American Union soldiers of Kentucky.”[4]  The obelisk monument bears the names of 142 African American Union soldiers. Various newspaper articles referenced the dedication ceremony in July of 1924. “According to a newspaper report, the monument cost “several hundreds of dollars,” which “patriotic citizens of both races” helped raise, and today stands as one only four monuments in the nation to honor black Union troops.”[5]  Following the Civil War black veterans were excluded from dedication ceremonies, experienced many failures obtaining funding for monuments, and waited 33 years before a monument was dedicated to their honorable service. Throughout the Gilded Age, and the emergence of Jim Crow, black veterans fought to keep the historical memory of black military service alive in the American conscious. From 1924 to 1998 a similar pattern that resembled subsequent years of the Civil War continued. Very few Civil War monuments were erected honoring black Civil War soldiers until the African American Civil War Monument Washington D.C. was unveiled in 1998.