The Second Presbyterian Church was founded in 1871 with a congregation of 21 people. As the following grew, a new building was designed by Reuben Harrison Hunt, a prolific Chattanooga architect. Hunt designed the building in a Gothic Revival style. Second Presbyterian continues to hold services work throughout the Chattanooga community. Since 1984, the basement of the church has functioned as a shelter for homeless men. 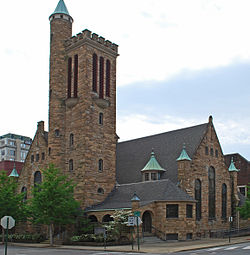 As the congregation grew, they looked to create a new building for worship. They hired Reuben Harrison Hunt, a local architect, to create a new church. Hunt designed a Gothic Revival building with a full brick facade. Turrets and towers are major features of the building along with large windows. Hunt went on to create the vast majority of government and public buildings throughout the area. Second Presbyterian is the oldest example of his work and his most pure example of the Gothic Revival style.

The Church has focused on empowering the urban community since the late 1930s. The congregation focuses its energy on creating health, family, and spiritual resources for the underprivileged. The undercroft of the church was originally used through the 1960s as a secondary shelter in emergency situations. However, as the need grew, Second Presbyterian allowed this portion of the building to become a homeless shelter.