After standing in Lake Eola for 100 years, the Confederate monument will be moved to Greenwood Cemetery. 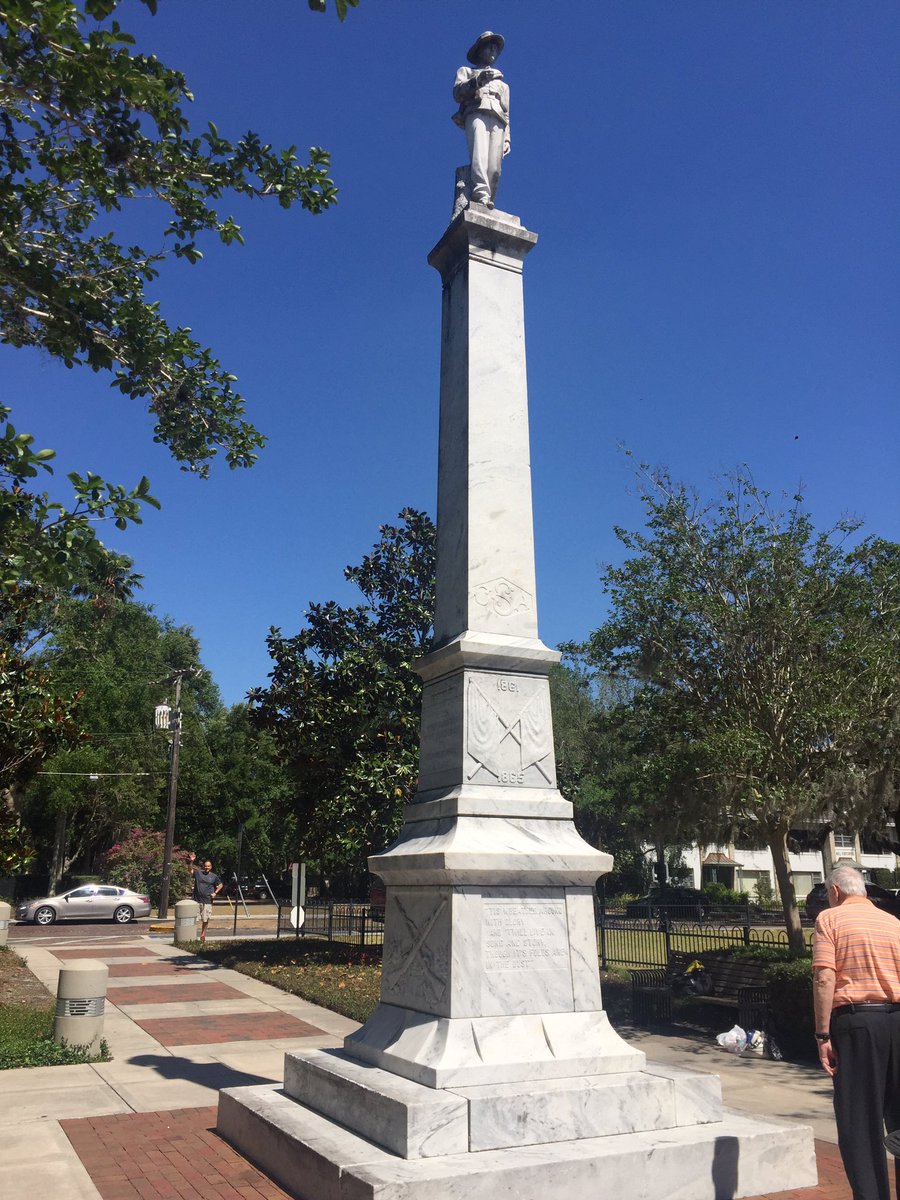 The Confederate monument originally stood in front of the courthouse, but was later deemed a traffic hazard. Image obtained from the Florida Public Archaeology Network. 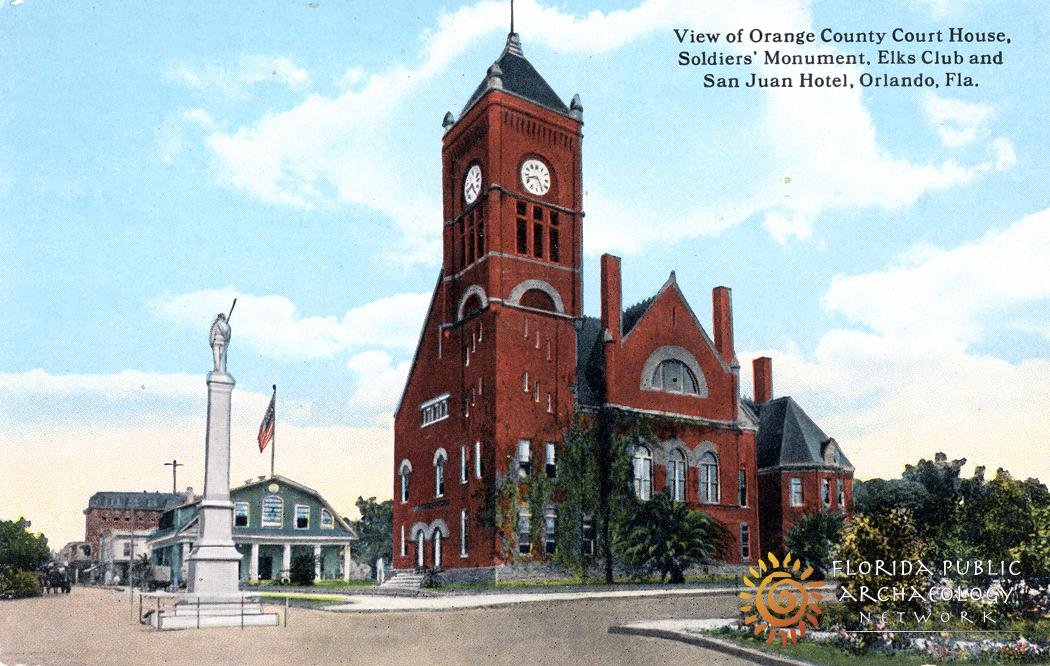 The Confederate monument was removed from Lake Eola in June 2017. Image obtained from the Seattle Times. 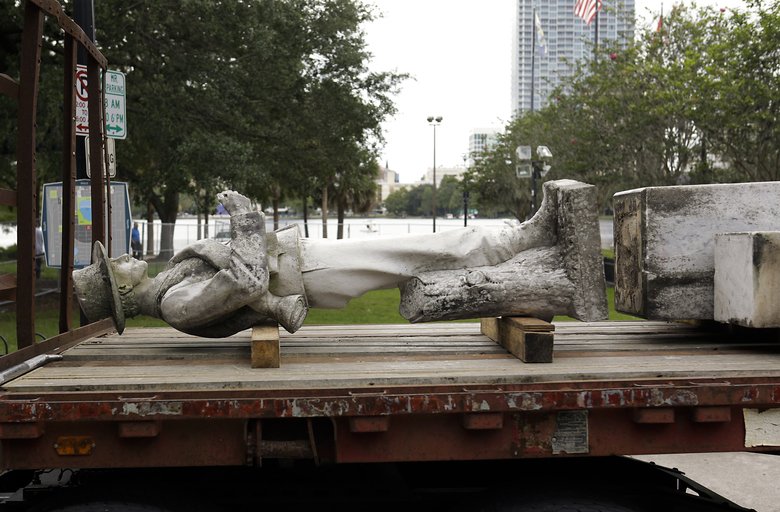 The United Daughters of the Confederacy was founded in 1894 as an umbrella organization for numerous smaller groups of female descendants of Confederate Civil War veterans across the country. The original goals of the UDC were to provide support to Confederate veterans and their families, establish and maintain cemeteries, and erect Confederate monuments and memorials. As historian Karen Cox has demonstrated in her book, Dixie's Daughters, the members sought vindication for their families and their region. As part of this effort, UDC members worked to promote several related ideas that suggested that white Southerners were noble defenders of a "Lost Cause"-an attempt to preserve a noble antebellum society rather than an effort to prolong the institution of slavery.

As part of this effort, groups such as the UDC created thousands of plaques, markers, and monuments. While many of the early memorials to Confederate soldiers were placed in cemeteries, the late 1800s and early 1900s saw hundreds of memorials placed in prominent locations that were explicitly or at least implicitly designed to further the myth of the "Lost Cause." White Southerners also revived Confederate symbols as a response against the civil rights movement of the 1950s and 1960s.

Around 1908, the Annie Coleman Chapter of the United Daughters of the Confederacy, located in Orlando, proposed creating a monument to honor Florida’s Confederate veterans. 15,000 Floridians fought for the Confederacy during the Civil War, with 5,000 of them perishing. The UDC spent a year holding fundraisers to raise the $2,500 needed to build the monument. The marble monument stood thirty-five feet tall and featured a six-foot-tall statue of a Confederate soldier standing on top. Each of the four sides bore an inscription, which reads as follows:

To the honored memory of The Soldiers, The Sailors, The Statesmen of the Confederate States of America. “Time Cannot teach forgetfulness when grief’s heart is fed by fame.”
“Tis wreathed around with glory and ‘twill live in song and story, though it’s folds are in the dust.”
“The cause for which he suffered was lost; the people for whom he fought were crushed; the hopes in which he trusted were shattered; but his fame, consigned to the keeping of time, which happily is not so much the tomb of virtue as its shrine, shall in the years to come, fire modest worth to noble ends.”
This monument shall stand through the years to come as our loving tribute to the Confederate Soldiers and as a memorial of his heroic courage, his unparalleled devotion and his unselfish patriotism.

In the mid-2010s, the Confederate monument became the source of controversy and many white and Black residents of the city petitioned for its removal. In 2015 the activist group "Organize Now" asked the City of Orlando to remove the statue following the Charleston, South Carolina shooting at an African American church that left nine people dead at the hands of a man who relished Confederate imagery. The city faced renewed calls to remove the monument in 2017 as other Confederate monuments in New Orleans were removed and Orlando neared the one year anniversary of the Pulse nightclub shootings.

In June 2017, the Johnny Reb monument was dismantled after standing at Lake Eola for 100 years. During the removal, a time capsule from 1911 was found inside the base of the statue. It was found to contain newspapers, Confederate money, flags, and UDC documents. The time capsule itself became a source of controversy when the local UDC argued that it belonged to them, and should not have been opened by city officials without their permission. The contents are planned to be donated to the Orange County Regional History Center. After undergoing repairs, the Johnny Reb monument was re-dedicated at Greenwood Cemetery in a plot for Confederate veterans.