This postcard depicts the partially-completed church in the 1930s or 1940s. Image obtained from digitalcommonwealth.org. 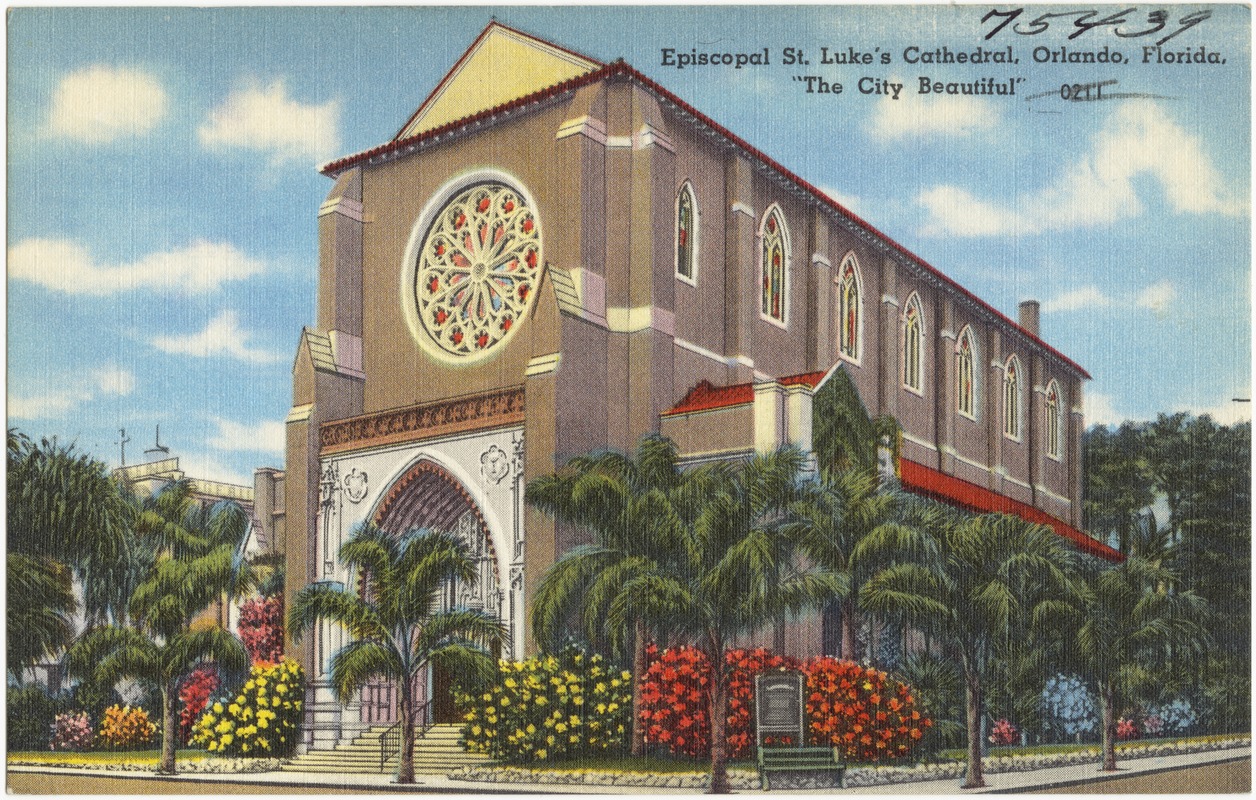 The original St. Luke's church was a wood frame building, which sat on the spot of the current one. Image obtained from the Cathedral Church of Saint Luke website. 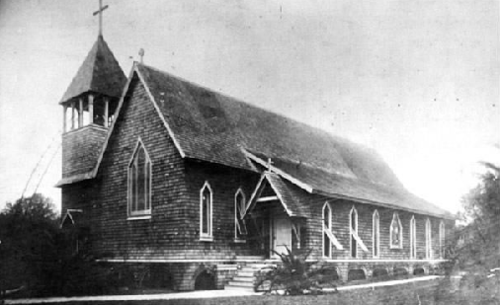 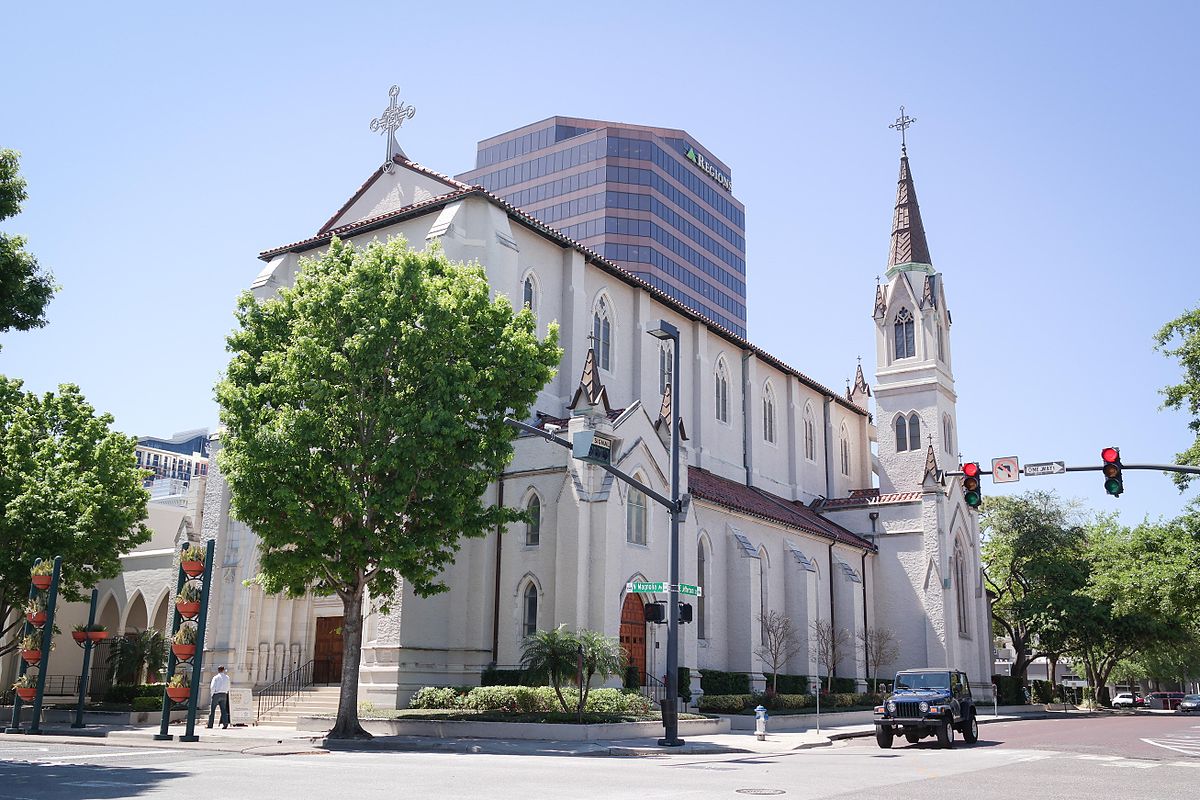 Interior sanctuary of the Cathedral Church. Image obtained from advisor.travel. 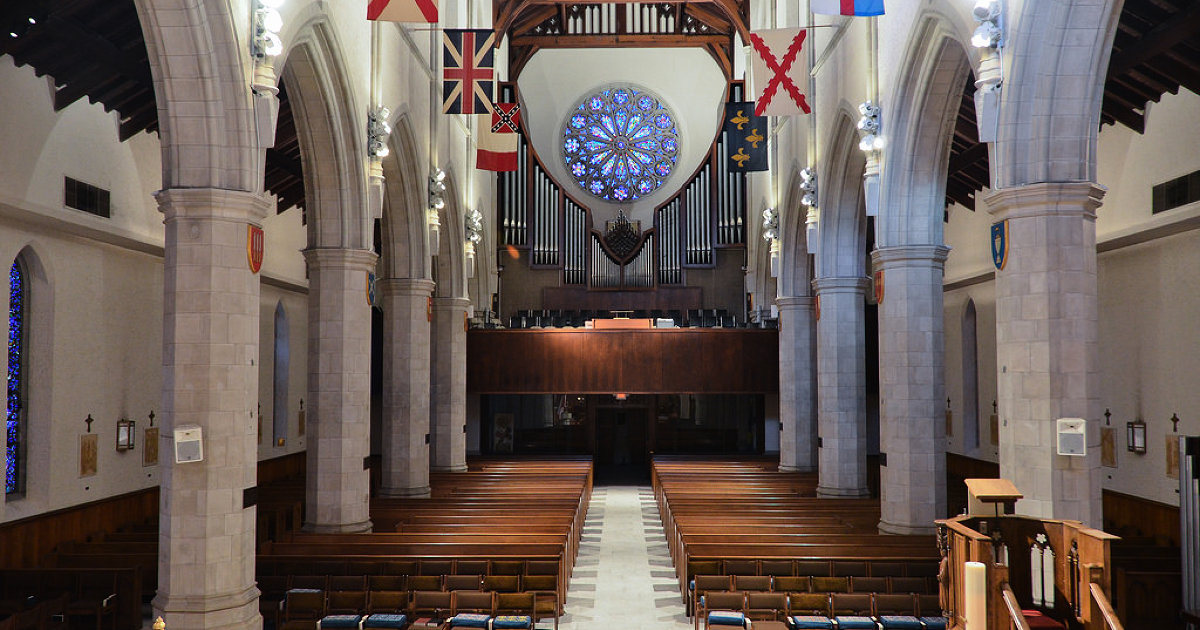 The Cathedral of Saint Luke traces its origins back to Francis Wayles Eppes, the grandson of President Thomas Jefferson. Eppes left his native Virginia for Tennessee in 1826, living in Tallahassee until he moved again to the small town of Orlando in 1869. A member of the Episcopal Church, Eppes began organizing the first gatherings of Episcopalian settlers in the area. The first members of this group were the Eppes, Greetham, Summerlin, Westcott, and Shine families. They would usually gather for services in Francis Eppes’ home; occasionally a preacher would visit and perform the services.

In 1881 the small group established their own church named St. Luke’s Mission. The following year they purchased a plot of land for $300 and constructed a small wood church. It was consecrated by the Bishop of Florida, The Right Rev. Edwin Gardner Weed, on March 18, 1892. In 1902 St. Luke was officially designated a cathedral, or head church, of what would become the Episcopal Diocese of Southern Florida (today the Diocese of Central Florida). The designation of St. Luke as a cathedral was pushed by Rev. William Crane Gray, who chose Orlando because it was the biggest and fastest-growing city in the area.

In 1900, the church established a school for girls, originally named the Pell-Clark School for Girls and later changed to the Cathedral School for Girls, which functioned until 1968. In 1895 the church helped open the first hospital in Orlando; it was known simply as the Church Home and Hospital before being renamed St. Luke’s Hospital in 1915. The hospital closed in 1918 after Orange General Hospital opened. During the Florida Land Boom of the 1920s, the church decided to erect a formal, elaborate cathedral to replace their simple wood frame building. Phillip H. Frohman, who had served as chief architect of the Washington National Cathedral, was commissioned to design the new building. Construction began in 1925, but the end of the land boom forced the church to scale back their plans and only the nave was built. Work on the rest of the cathedral did not resume until the 1980s, with it finally being completed in 1987. In 1981 St. Luke established the famous Orlando Deanery Boychoir (and later the Girl Choir). They have performed in multiple countries around the world and at venues such as New York’s Carnegie Hall and the White House’s East Wing.

St. Luke held a memorial service in the aftermath of the June 12, 2016 Pulse night club shooting that killed forty-nine people and wounded fifty-three. On June 18, a funeral was held at the church for one of the victims, Christopher “Drew” Leinonen. The service attracted news coverage when several members of the Westboro Baptist Church protested at the funeral; they were met by dozens of counter-protesters who blocked them from the church.

Fillmon, Tim. “The Cathedral Church of Saint Luke.” The Historical Marker Database. Last modified June 16, 2016. Accesed May 14, 2017. https://www.hmdb.org/marker.asp?marker=93070.
“History The Cathedral: A Detailed and Fascinating History of the Founding and Growth of our Church throughout the Years.” Cathedral Church of Saint Luke. Accessed May 14, 2017. http://www.ccslorlando.org/history/.
Lotan, Gal. “Christopher ‘Drew’ Leinonen memorial: ‘Every single one of us is called on to love.’” Orlando Sentinel. June 18, 2016. Accessed May 14, 2017. https://www.orlandosentinel.com/news/pulse-orlando-nightclub-shooting/victims/os-christopher-drew-leinonen-funeral-20160618-story.html.
Picture 1: https://fedora.digitalcommonwealth.org/fedora/objects/commonwealth:6108vp93t/datastreams/access800/content
Picture 2: http://www.ccslorlando.org/history/
Picture 3: https://upload.wikimedia.org/wikipedia/commons/thumb/d/d6/Cathedral_Church_of_St._Luke-2.jpg/1200px-Cathedral_Church_of_St._Luke-2.jpg
Picture 4: https://img-cdn.advisor.travel/1200x630px-Cathedral_Church_of_St_LukeOrlando_Florida1.jpg