In 1907, the California Fruit Cannery Association built an industrial complex which was at the time the world's largest fruit and vegetable cannery. The complex included the 198,000-square-foot Haslett Warehouse and was designed by architect William Mooser. Canning operations ended in 1939 and the buildings were used as warehouses until the early 1960s when they were slated for demolition. In 1963, developer Leonard Martin purchased the former cannery and converted it into shops and restaurants.

A shot of the Warehouse behind some of the city's cable cars. 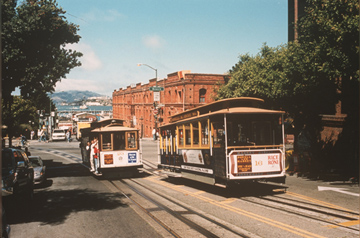 A fire in 2002 destroyed the interior of the Warehouse, but the following year it reopened as the Argonaut Hotel. Today the building is owned by the National Park Service and houses the San Francisco Maritime Park Museum, a museum of San Francisco's maritime heritage, on the ground floor. The rest of the building is leased to San Francisco's Kimpton Hotel and Restaurant Group for the Argonaut Hotel.
The Group took over the lease of the 252 room boutique hotel and renovated it. The rent paid to the NPS is used to fund the preservation of its historic ships. Designed to resemble a ship, the public areas of the Argonaut Hotel have wooden plank floors and portholes in the lobby walls adding to the overall nautical atmosphere.

The California Fruit Canners Association built the Haslett Warehouse between 1907 and 1909, a four-story, timber and solid brick structure. After changing hands several times, the Haslett was transferred to the National Park Service in 1978 and was included in the San Francisco Maritime National Historical Park when it was established in 1988. The City of San Francisco declared the Haslett Warehouse an historic landmark in 1974 and the building was listed on the National Register of Historic Places in 1975.

National Register #75000172 Haslett Warehouse. Noe HIll. Accessed May 13, 2017. http://noehill.com/sf/landmarks/nat1975000172.asp.
On March 16, 2002, a five-alarm fire destroyed the interior of the Haslett Warehouse while it was being renovated. Renovation continued, and in August 2003, the Argonaut Hotel opened for business. Today the building is owned by the National Park Service and houses the San Francisco Maritime Park Museum, a museum of San Francisco's maritime heritage. The balance of the building is leased to San Francisco's Kimpton Hotel and Restaurant Group for the Argonaut Hotel.
Hotel Housed in Historic 1909 Fisherman’s Wharf Warehouse to Open in September 2003. Bay Crossings. Accessed May 13, 2017. http://www.baycrossings.com/Archives/2003/03_April/hotel_housed_in_historic_1909_fishermans_wharf_warehouse_to_open_september_2003.htm.