In 1909, after the marriage of Elizabeth Leslie Meyerfeld and Leon Roos of Roos Brothers Men's Clothing, Elizabeth's father, Morris Meyerfeld, a partner in the Orpheum Theater Circuit, commissioned Bernard Maybeck to design a house for the couple while they were vacationing in Europe, which allowed the architect great freedom. This was the largest house designed by Maybeck in San Francisco.

Side shot of Roos House. 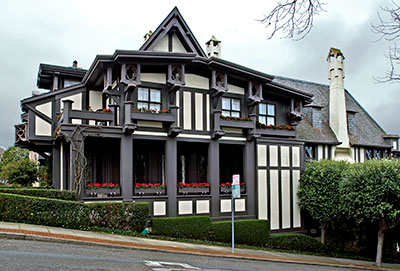 The building's architect, Bernard Maybeck, was born in New York City in 1862 before moving to Berkeley, California in 1892. The son of a German migrant, Maybeck learned his trade at the Ecole des Beaux Arts in Paris. He became and instructor at the University of California and mentored some of the most important Californian architects, including William Wurster and Julia Morgan.

Many of his buildings still stand to this day. The First Church of Christ, built in 1910, is a National Historic Landmark and is considered to be one of his best works. In fact, several of his buildings are listed on the National Register of Historic Places.

Bernard Maybeck died in 1957 and is buried in the Mountain view Cemetery in Oakland.

Maybeck and His Work. Maybeck. Accessed May 13, 2017. http://www.maybeck.org/maybeck.html.