The Brainerd Mission was a Christian mission to the Cherokee in Chattanooga, Tennessee. It was established by the American Board of Commissioners for Foreign Missions in 1817 and named after David Brainerd. On May 27th, and 28th, 1819, former president James Madison visited Brainerd Mission with General Edmund Pendleton Gaines. He donated $1000 to the work of the Mission. It ended with the Cherokee removal in 1838. People such as Ainsworth Blunt and Cephas Washburn worked at this mission. The Brainerd Mission Cemetery is one of the oldest in Hamilton County and consists of 60 graves, most of which are of missionary workers among the Cherokee. The cemetery was added to the NRHP on December 6, 1979.

Brainerd Marker to the Cherokee Indians 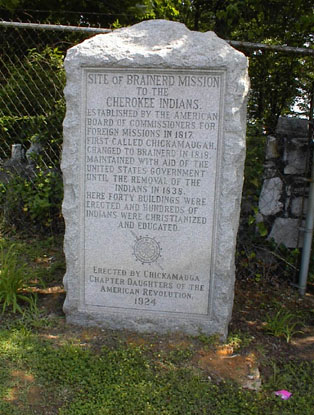 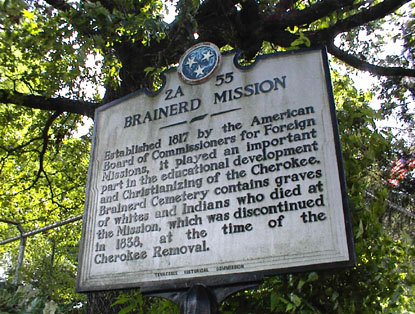 Brainerd Marker to the Cherokee Indians 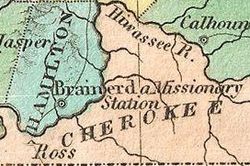 Brainerd Mission, established in 1817, closed in 1853 due to the Cherokee Indian removal. It is one of the oldest cemeteries in Hamilton County. Along with the five local chapters of the D.A.R. and the John Sevier Chapter of the S.A.R. (Sons of the American Revolution) this historical cemetery is maintained and owned. The D.A.R. is an organization of women who focus on “…patriotic historical and genealogical…objectives of historic preservation, education, and patriotism…” 1