The Century Building was a ten-story neo-Classical building that stood across from the Old Post Office in St. Louis, Missouri. Constructed in 1896, it was used as retail space, offices, and a 1,600-seat theater. Noteworthy tenants included Kinloch Telephone, the Equal Suffrage League, and the St. Louis branch of the White Star Line. It gradually fell into disuse during the second half of the twentieth century, like many buildings in the downtown area. In the early 2000s the Century Building became the source of much controversy over plans to demolish it and build a parking garage in its place. Despite petitions and lawsuits, the Century Building was demolished in October 2004. Today the 9th Street Garage stands in its place, providing parking space for downtown businesses.

Early photo of the Century Building. Image obtained from Pinterest. 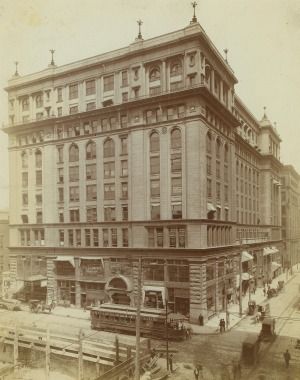 The Century Building in the years prior to its demolition. Image obtained from builtstlouis.net. 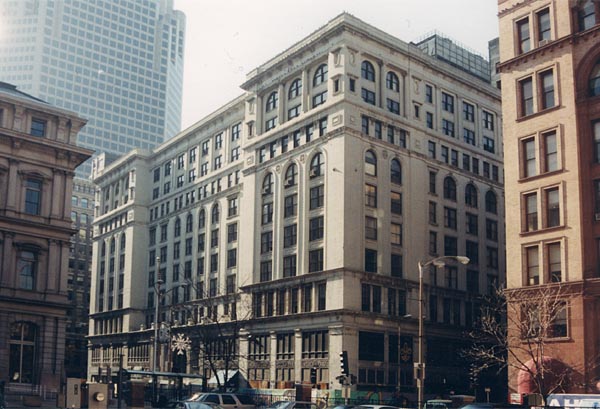 Despite strong efforts to save it, the Century Building was controversially demolished in October 2004. Image obtained from the Landmarks Association of St. Louis. 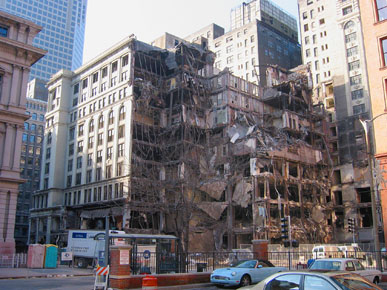 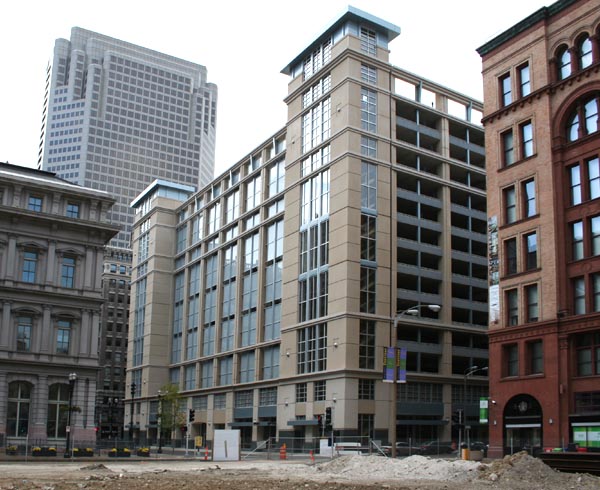 The downtown area of St. Louis began to grow and develop following the construction of the Old Post Office building in 1884. Many high-rise buildings soon followed. The Century Building was built in 1896 amidst the construction boom.  It was designed by the Chicago architects Raeder, Coffin & Crocker in neo-Classical style. It stood ten stories tall, stretched for half a block, and was the only commercial building in St. Louis to have an exterior made of marble. While successful, the building was soon sold to the Syndicate Trust Company in 1902. In 1906 the Company added a sixteen-story annex to the Century Building, expanding it to cover an entire city block. This new section was referred to as both the Century Annex and the Syndicate Trust Building.

The Century Building and the Century Annex each contained a wide variety of tenants over the course of its history. Early ones included insurance and loan companies, publishers, medical offices, the Kinloch Telephone Company, the St. Louis-San Francisco Railway, the local branch of the White Star Line, and the Winkle Terra Cotta Company. Another tenant was the Equal Suffrage League, St. Louis’ leading women’s suffrage organization. The third floor was occupied by the Bryant & Stratton Business & Shorthand College. Several floors were occupied by the 1,600-seat Century Theatre. Perhaps the largest tenant was the Scruggs, Vandervoort & Barney dry goods firm, which occupied at least seven floors. The last business to exist in the Century Building was a Walgreens that operated on the first floor until 2002.

By the late 1990s and early 2000s many of the large commercial buildings in downtown St. Louis were vacant and deteriorating, including the Century Building. In 2001 plans were made to refurbish the Old Post Office as part of a plan to redevelop and revitalize the downtown area. As plans were underway some of the Post Office’s prospective tenants, including Webster University and the state appellate courts, demanded parking space within view of the building. It was decided to build a parking garage on the site of the Century Building because it was the only close site large enough to hold the necessary amount of cars. The decision met staunch resistance from preservationists; a petition received thousands of signatures, several lawsuits were filed, and the building was added to the National Register of Historic Places all in an effort to halt the demolition plans. The National Trust for Historic Preservation controversially gave its approval for the demolition, arguing that destroying the Century Building to make parking space was the only viable way of preserving the Old Post Office and other historic downtown buildings. The Century Building was demolished in October of 2004. Today the 9th Street Garage stands on the former site of the building.