The Commerce Trust Building, also known as the National Bank of Commerce Building, is the headquarters for the Commerce Bank of Kansas City. The bank originally began under Francis Reid Long, who migrated to Kansas City in 1865 with $20,000 to invest in the growing city. The timing of the bank's founding after the Civil War was ideal as the city was chosen as the terminus of several railroads and included the first railroad bridge connecting this area with Missouri. The bank grew rapidly and its founders determined to create a new headquarters building in the heart of Kansas City’s growing business district. Designed by Jarvis Hunt, the Commerce Trust Building was constructed between 1907 and 1908 by the George A. Fuller Company. The fifteen-story building has maintained most of its historic features, such as its large bronze and copper clock.

Postcard of the building, labeled here as the National Bank of Commerce Building. Image obtained from Squeeze Box City. 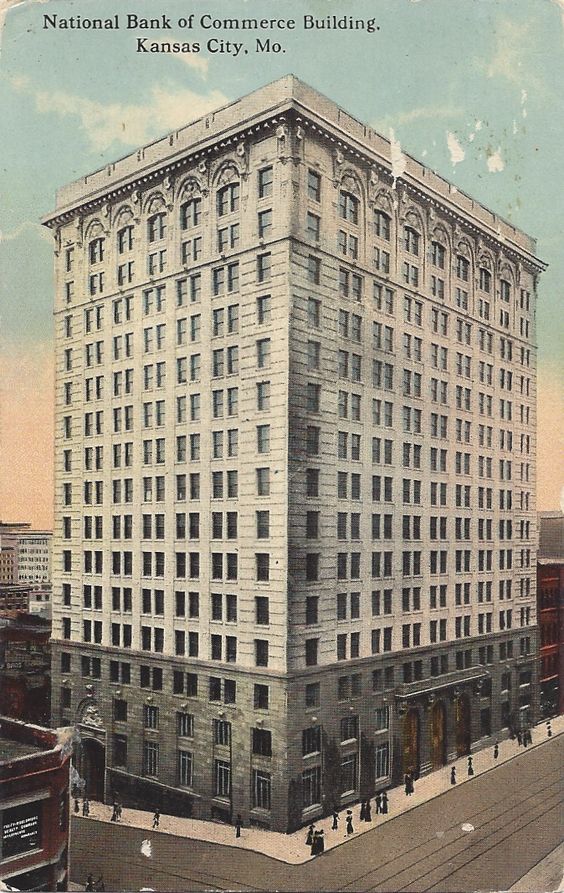 In 1953 a large bronze and copper clock was installed on the southwest corner. It was built by the Livers Bronze Company in conjunction with IBM. Image obtained from flickr. 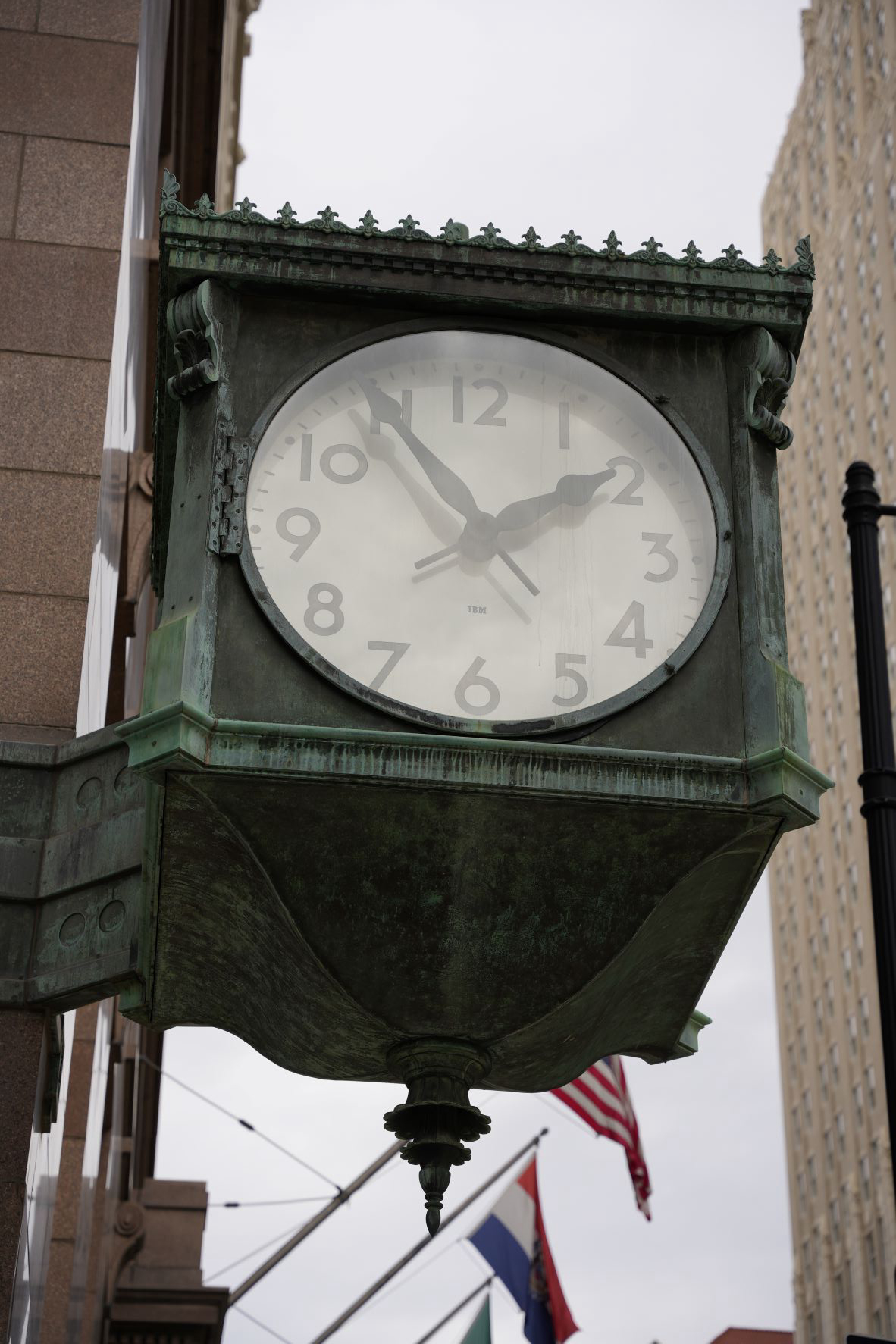 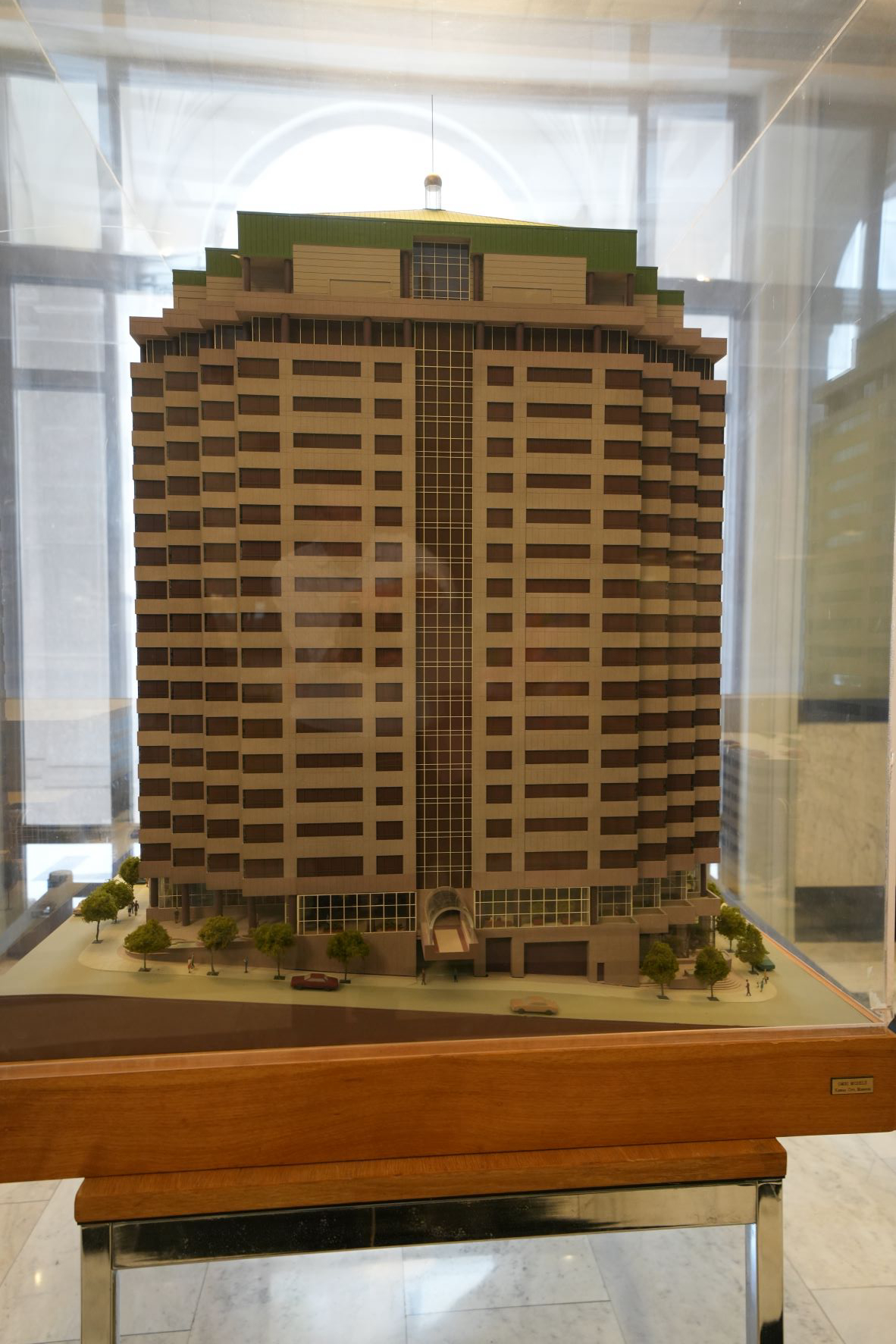 The building's exterior has remained largely unchanged since its construction over a century ago. 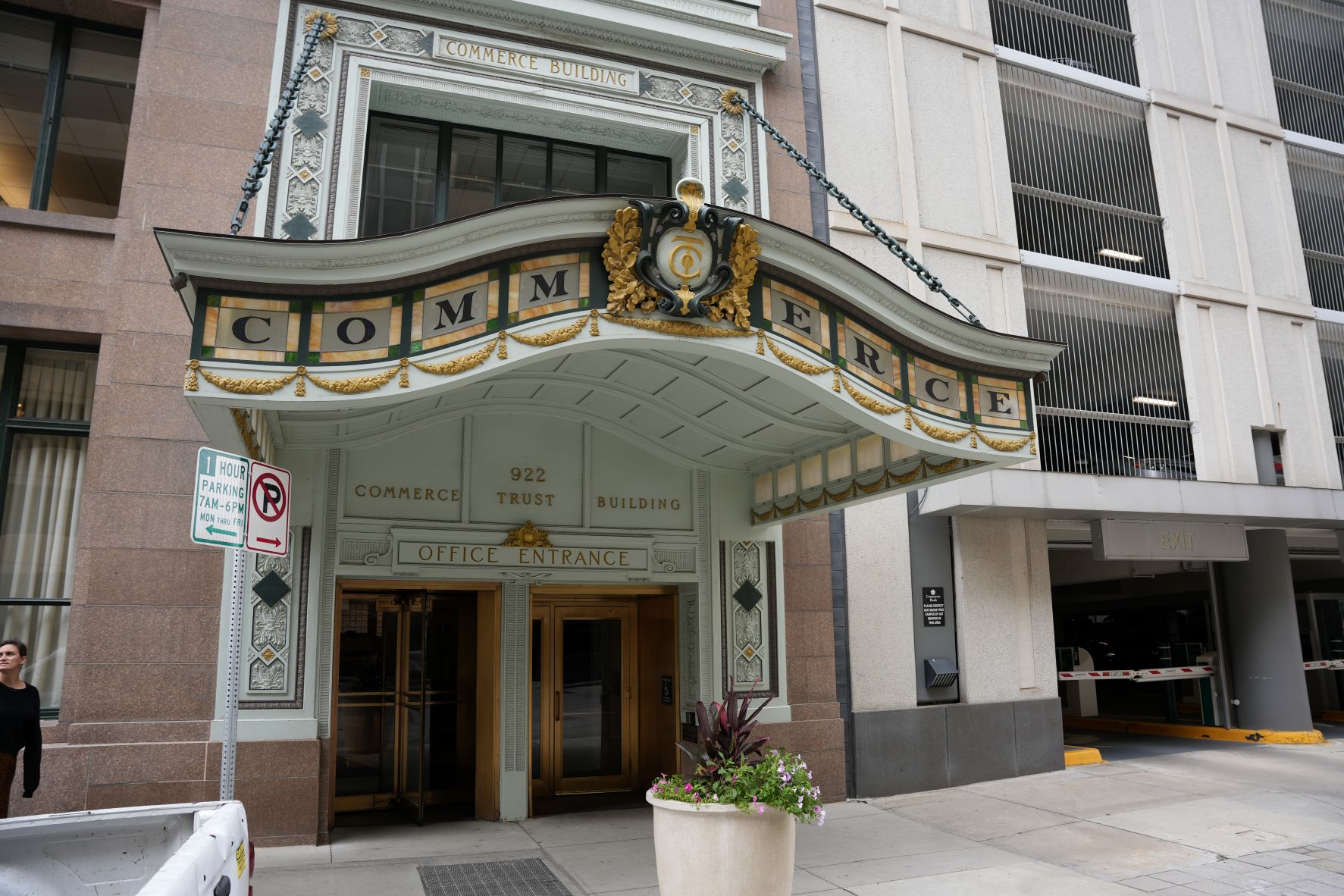 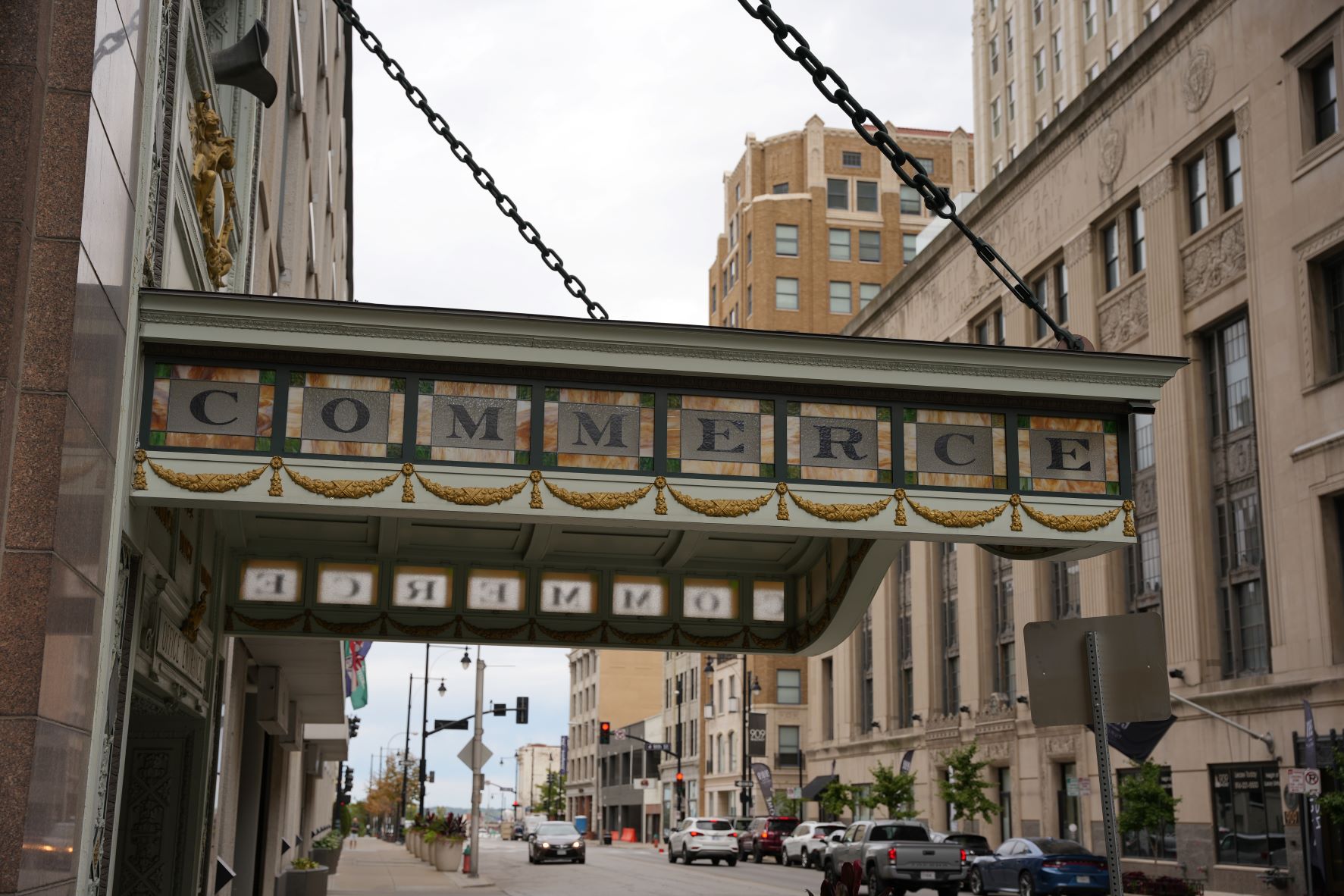 The ornate bank lobby is now utilized for special events

The origins of the Commerce Bank date to 1865 when Francis R. Long founded the Kansas City Savings Association with $20,000. It grew quickly and soon became one of the most successful financial institutions in Missouri. In 1881 Dr. William Stone Woods acquired the company and reorganized the company as the National Bank of Commerce; it has remained under the management of his descendants since then. By 1900 it had become reportedly the largest bank west of Chicago. In 1898 the bank moved into the former Kansas City Journal building on the corner of 10th and Walnut Streets. Future President Harry S. Truman worked in this building between 1903 and 1905.

Due to restrictions preventing certain banks from opening branches, Dr. Woods decided to create a second company as a way skirt these regulations. In 1906 he created the Commerce Trust Company and announced plans for the construction of a shared headquarters for the two banks. The former Journal building was demolished and work on the new structure began on the same spot in November 1906. Noted Chicago architect Jarvis Hunt was commissioned to design the building, and the George A. Fuller Company was contracted for the construction. The fifteen-story building was designed in the Beaux Arts style and was made with granite, Brazilian brick, and terra-cotta. It was notably one of the first skyscrapers in Kansas City constructed with structural steel. The exterior featured elements such as a three-part vertical block scheme and ornamental lion heads. In 1953 a 3,300 pound, cast bronze and copper clock made by IBM and the Livers Bronze Company was installed on the southeast corner. Construction of the National Bank and Commerce Building was completed in 1908. It was the tallest building in Missouri at the time. Both companies shared the building; the National Bank of Commerce operated from the lobby facing Walnut Street, while the Commerce Trust Company operated from the 10th Street side.

In 1921 the two companies formally merged under the name Commerce Trust Company (later renamed the Commerce Bank of Kansas City in 1970.) The bank continued to grow, introducing services such as the first 24-hour transit department. In 1965 it built the nearby Commerce Tower Office Building as part of an effort to redevelop the downtown Kansas City area. Today the Commerce Bank is a subsidiary of Commerce Bancshares. It is the largest banking group in Missouri and boasts hundreds of branches across the Midwest. Commerce continues to reside in the building on 10th and Walnut Street. In 2004 the building underwent a $48 million series of renovations and restorations.