204 Washington St., built c. 1790 and home to the Miller family for over a century. Solomon Miller and his wife Sophia Cookus Miller were both children of Revolutionary War veterans and produced a family of artisans including weavers, carriage makers, painters, cabinet makers and needle crafters. Eleazer Hutchinson Miller was a painter of watercolors and oils, etcher, and illustrator whose work is on display at the Corcoran Gallery in Washington and at the Historic Shepherdstown museum. Mid-twentieth century owner Edmund Jennings Lee IV (great grandson of Edmund Jennings Lee, the uncle of Robert E. Lee) was born in Shepherdstown, became an Episcopal priest and spent 25 years as a missionary in China as well as several years as headmaster of Chatham Hall girls’ school in Virginia. He and his wife retired to “the Crooked House,” a name he coined. 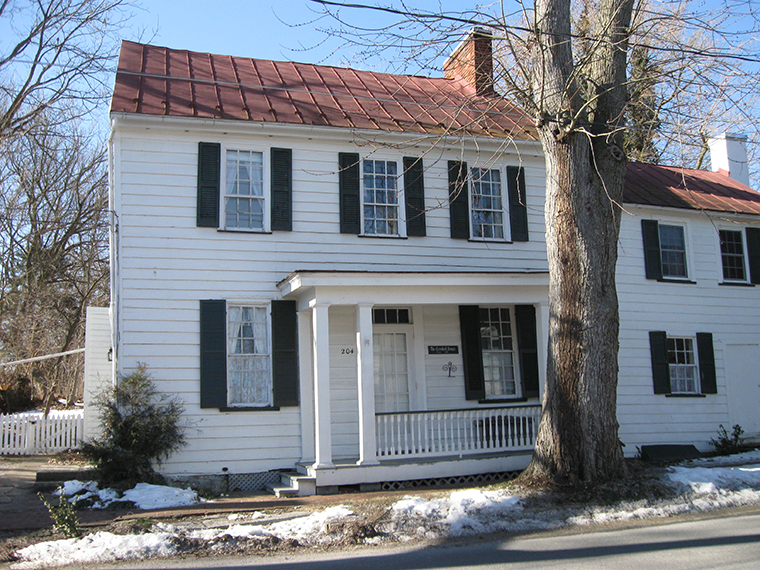 Eleazer Hutchinson Miller, the son of Solomon and Sophia Miller was born in Shepherdstown. He showed an early talent for drawing. He eventually let Shepherdstown at 17 for D.C. He studied art under Mr. Gibson and eventually opened his own studio. He produced oil paintings, water colors, drawings, and etchings. One of his etchings was on display at the National Gallery of Art.