NW corner of Washington and Church Sts, one block south of the United Methodist Church. Dedicated in 1891 in honor of Agnes Gibson (1853-1941), a lay person who played a major role in raising funds for the building of the church. It is now the St. Agnes Chapel. On July 28, 2008, the St. Agnes congregation dedicated a striking new church edifice located at 106 South Duke Street, behind the parish house. 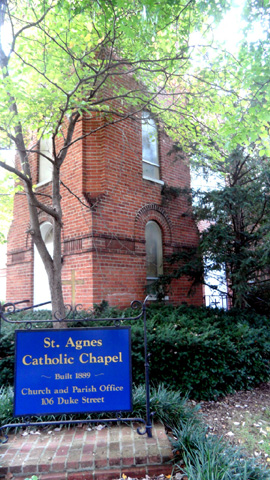 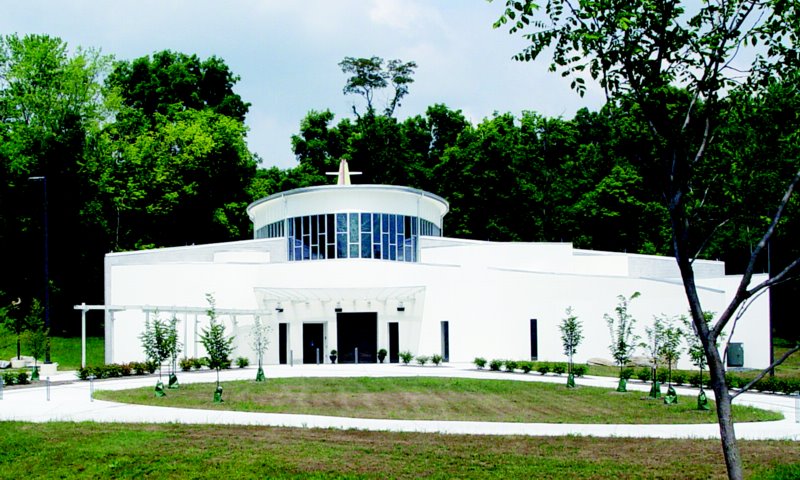 Before building a church building, the congregation celebrated mass at Billmeyer’s Hall (corner of German and Church Streets). Masses were held about once a month.[1] In 1889, the local newspaper, The Shepherdstown Register, began to report that work on a chapel was progressing. In 1890 and 1891, fundraising helped to ease the financial burden. March 28, 1890 was the first Mass in the enclosed building.[2]

The building is named after one of the local women who helped to raise the funds, Agnes Gibson. Miss. Gibson was a lay person who worked “so faithfully and laboriously in raising money for its erection.”[3] She also taught music, Christian doctrine in Sunday School, and directed the choir.

The Church was dedicated on June 12, 1891, bringing many priests, but also the Bishop of Richmond Virginia, Vandevyer. St. Agnes did not have a regular pastor, a pastor from Harpers Ferry would come once a month to preside over mass. Then one form Charles Town would come. The Catholic population was small with 80 Catholics registered in 1891.[4]

St. Agnes received their first full -time pastor in 1980 and Masses were held every weekend. St. Agnes celebrated its centennial in August 1988 through August 1989 with a yearlong celebration. There were picnics, special presentations, prayer services, and special music. The expansion of the Catholic population necessitated a move for St. Agnes Church. They recently moved its Church building in 2008 to S. Duke Street.[5]