Constructed in 1886 and named in honor of donor William E. Dodge, this building became the second on the campus of Livingstone College. A private historically Black institution (HBCU) located in Salisbury, North Carolina, Livingstone College operated in partnership with the African Episcopal Methodist Zion Church. The college was established in 1879 as Zion Wesley Institute in Concord. The school moved to Salisbury two years later. In 1887, the institution changed its name to honor British missionary David Livingstone who disappeared while searching for the origins of the Nile River. 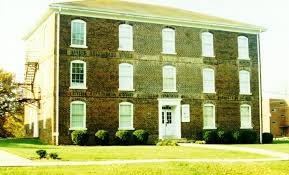 Ordained a minister in 1852, Bishop James Walker Hood helped establish over six hundred churches within North Carolina, South Carolina, and Virginia. In 1872, he became the presiding bishop over the African Methodist Episcopal Zion church. He was an abolitionist and during the antebellum period and during the Civil War, he traveled to New Bern where he preached to Union soldiers in the area. Hood also supported the fights for rights and education of women.

In 1880, Zion Wesley Institute shut its doors and reopened in 1882 a couple miles north of Salisbury. In 1887, Zion Wesley Institute changed its name to honor the African missionary David Livingstone. Also, in this same year the college was able to grant the first degrees to eight men and two women. These two women were the first women to earn their bachelor’s degrees in the state of North Carolina.

In 1982, several of the building on campus have been listed on the National Register of Historic Places. The oldest buildings on campus is Dodge Hall which was built in 1886.

Solomon Carter Fuller was a notable alumni who became a psychiatrist and physician. Fuller moved from Liberia to the United States to study at Livingstone College and graduated in 1893 and attended Long Island College Medical School. In 1897, Fuller went on to obtain his MD from Boston School of Medicine. After graduating he went into research at the psychiatric clinic in Munich, Germany. While there he studied under Emil Kraepelin who is named as the modern psychiatry and Alois Alzheimer who is credited with finding the first published case of pre-senile dementia.