Page one of the Treaty of Miami 1826. The Treaty discusses the terms in which the Miami Nation would cede their lands North and West of the Wabash and Miami rivers to the federal government. 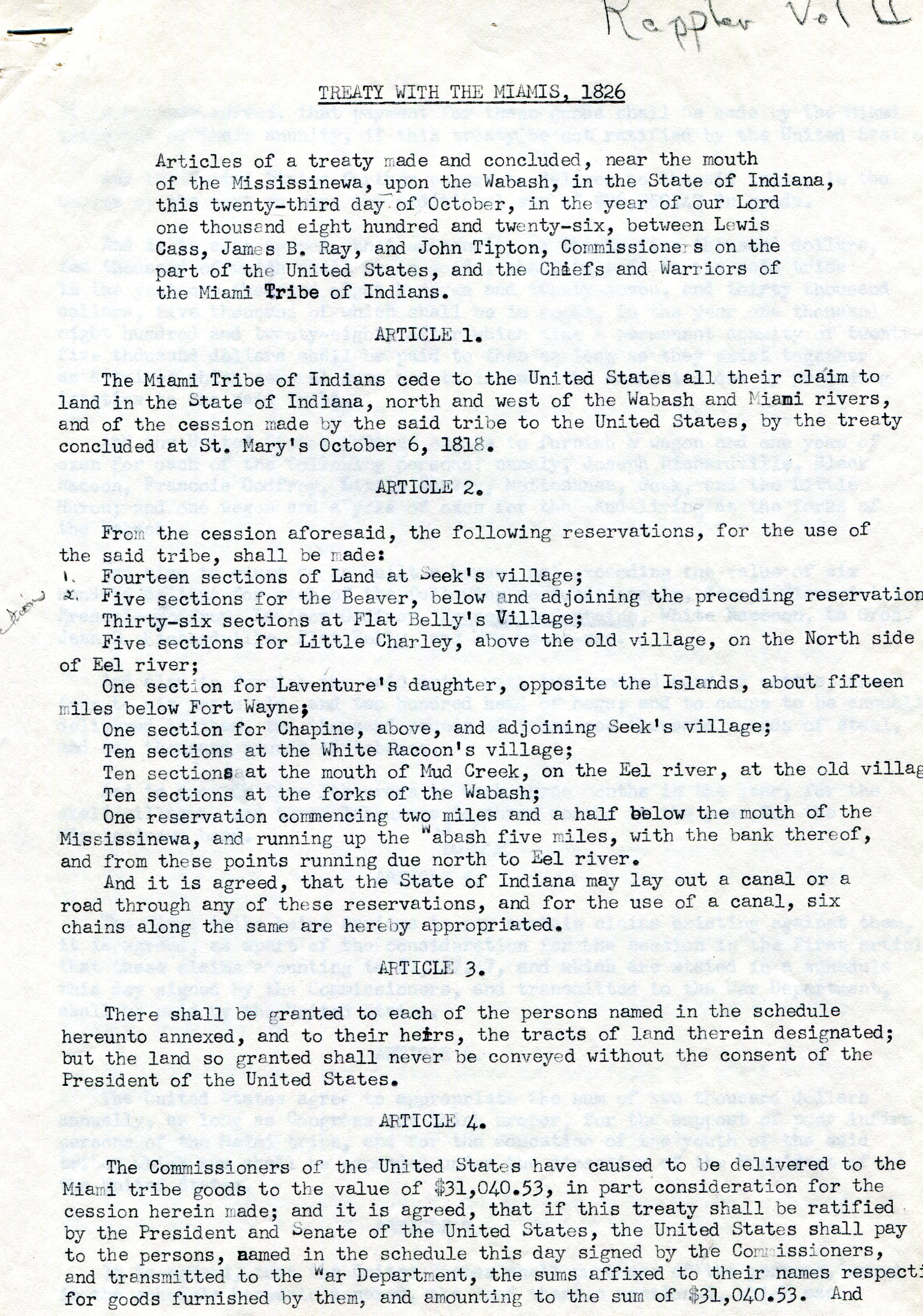 Descendants of Jean B. Richardville come together outside of Akima Pinsiwa Awiiki in order to celebrate Richardville's legacy and the Miami culture. 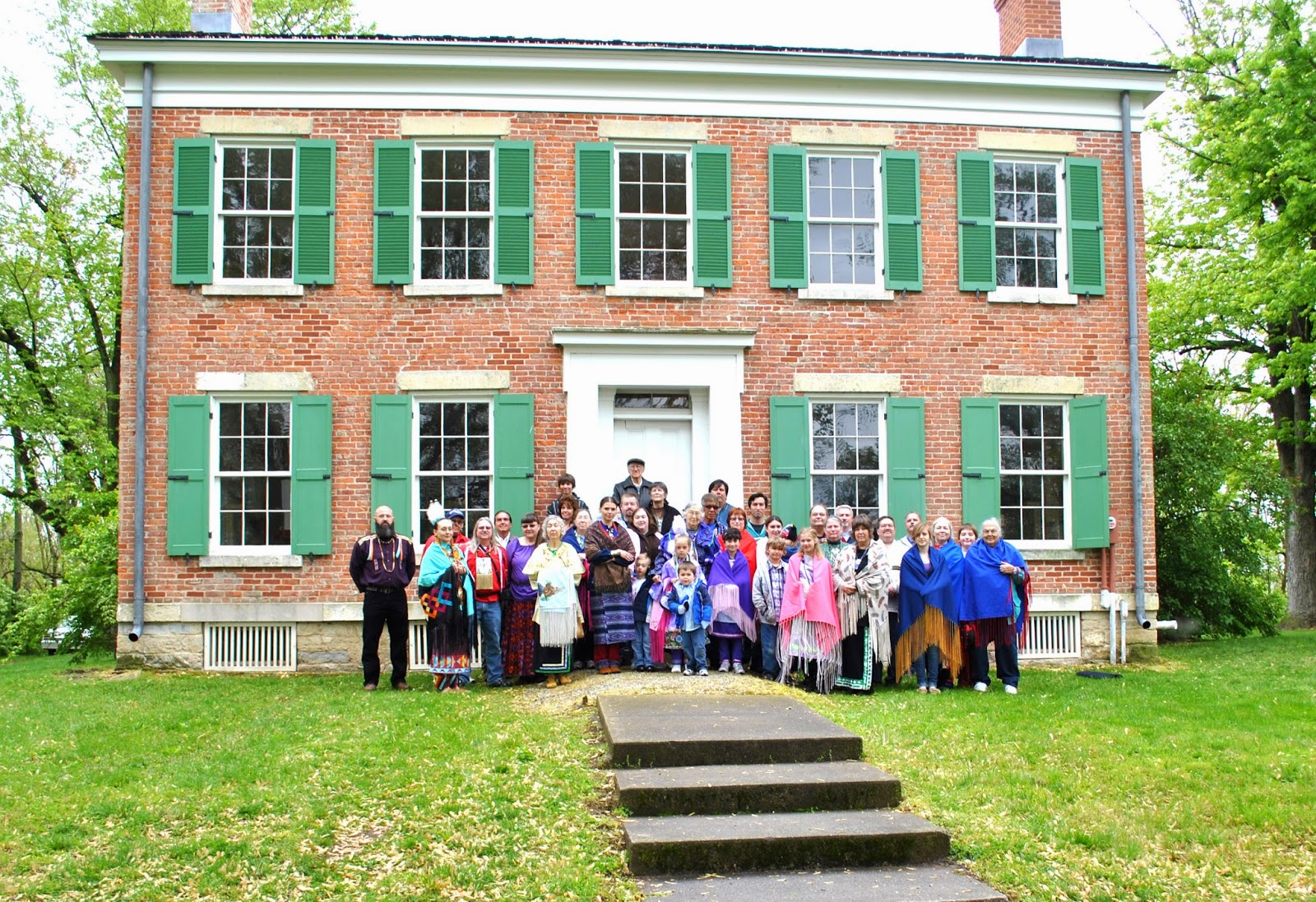 This portrait of Chief Jean B. Richardville can be found at the Ft. Wayne History Center, along with a sheet of paper containing his signature.

The account of Richardville's rescue is featured in the "Background Information" segment of this post. The plaque is located in Cathedral Square Cemetery in Fort Wayne, IN. 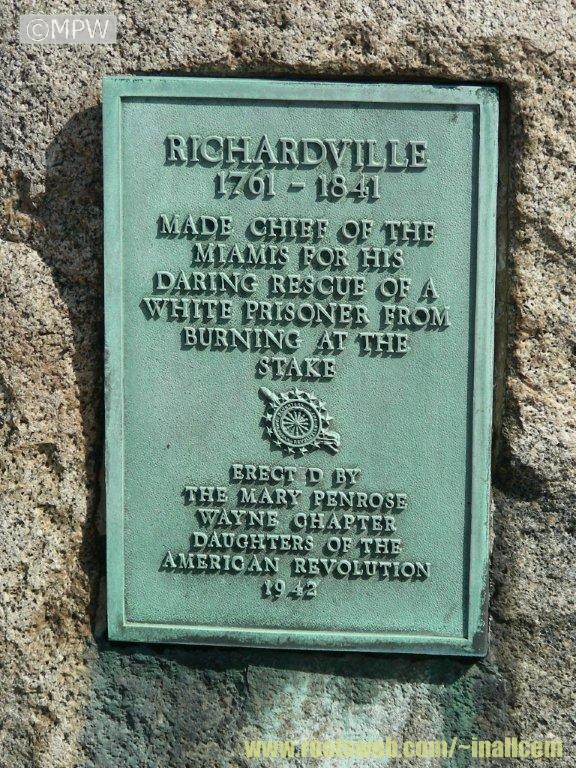 Page two of the Treaty of Miami 1826. These articles discuss what the Miami Tribe received from the State of Indiana after they ceded their lands to the United States. 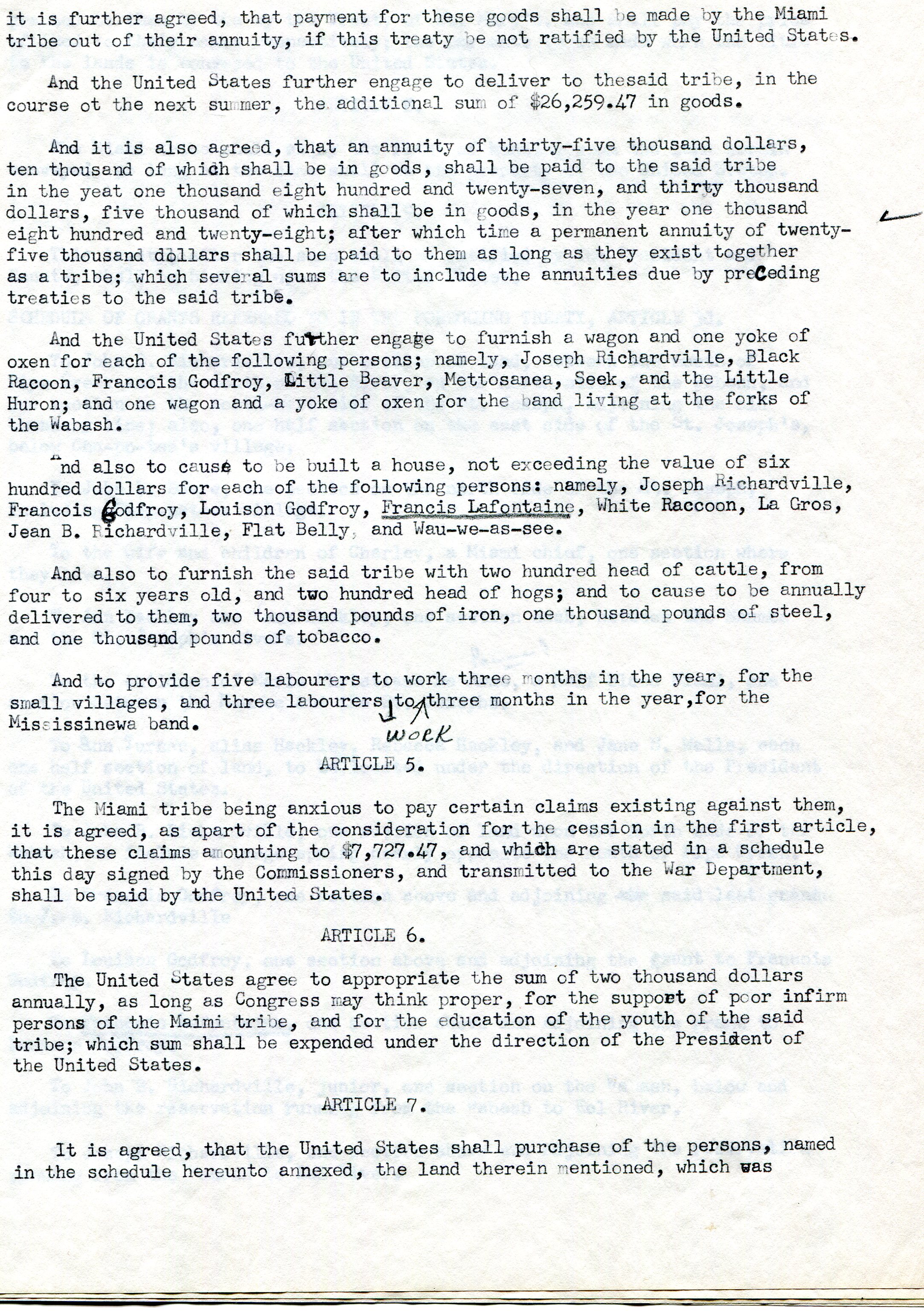 "Here rest the remains of John B. Richardville, Principal chief of the Miami Tribe of Indians. He was born at Fort Wayne, Ind about the year 1760. and died in August A.D. 1841." 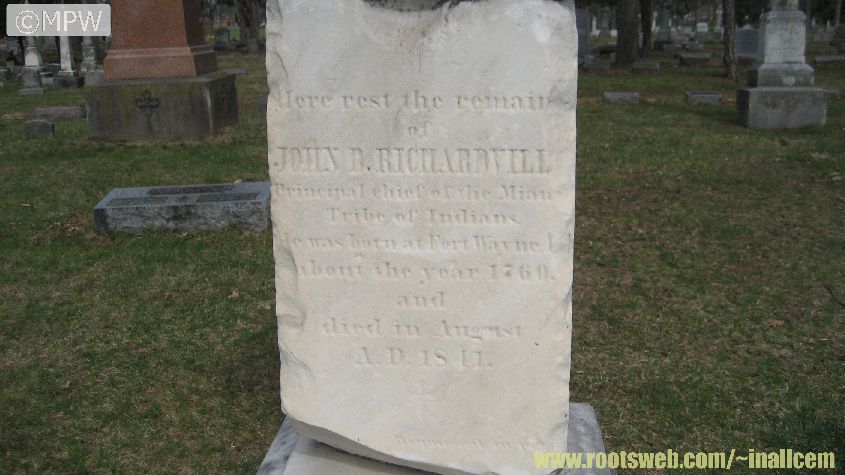 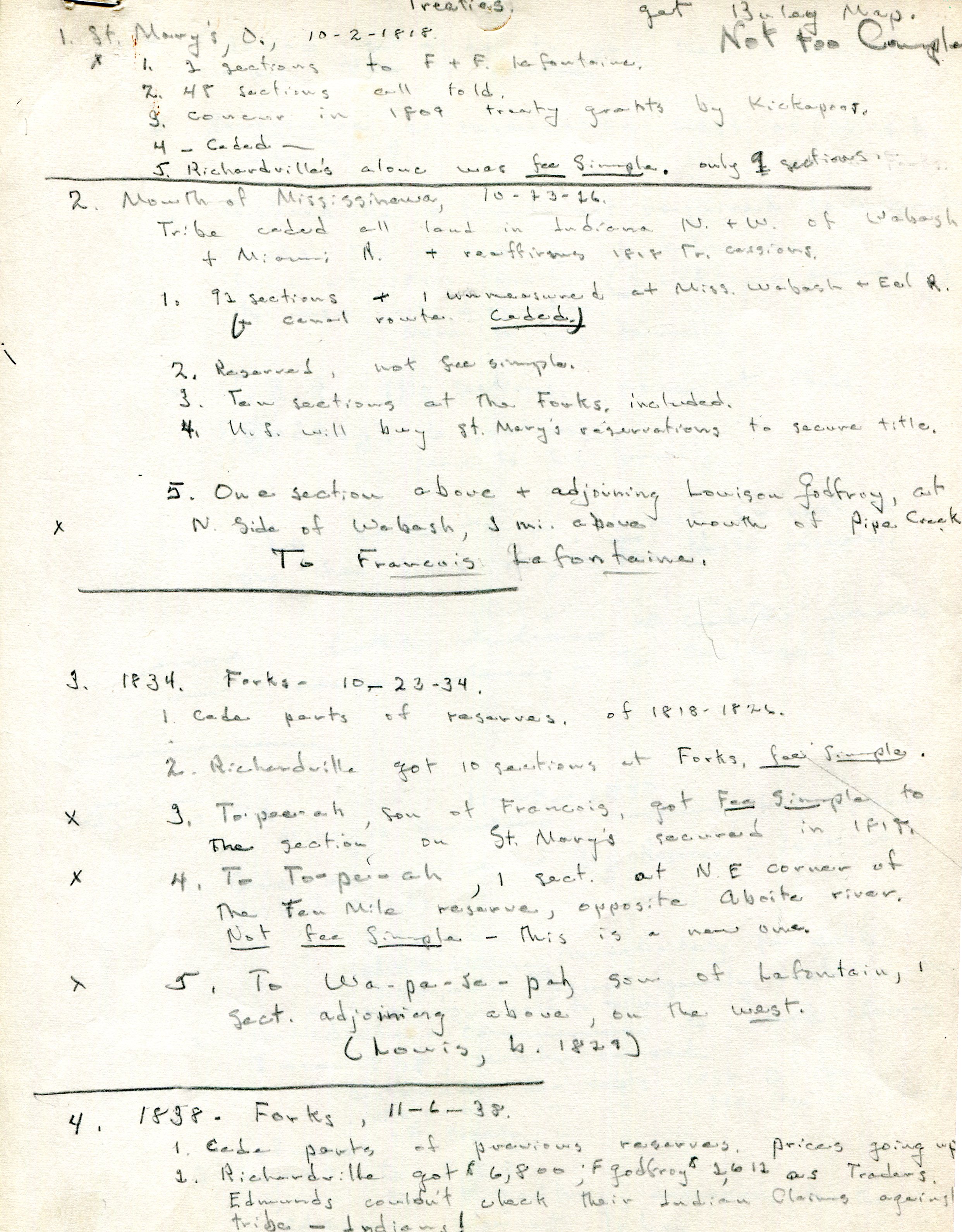 Located on the property of the Chief Richardville House. 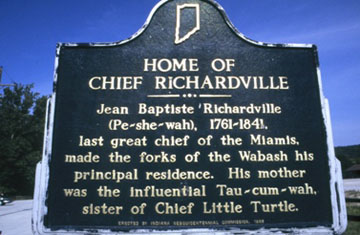 Sign located outside the Chief Richardville House for interpretive purposes. 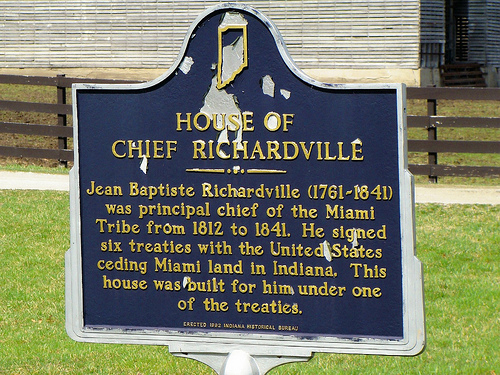 Chief Jean Baptiste Richardville (Peshkewah) was the Civil Chief of the Miami from 1816 to 18415. He was born to a French-Canadian fur trader, Joseph Duret de Richardville, and Tacumwah, who was the sister of the Kekionga Village (present-day Fort Wayne) chief, Pacanne.

On October 23, 1826, Miami chiefs and warriors gathered Commissioners of the State of Indiana, Lewis Cass, James B. Ray, and John Tipton, in order to cede their claimed land north and west of the Wabash and Miami Rivers to the United States of America.6 While the majority of the Miami Tribe's land was ceded to the State of Indiana, Article II of the Treaty of Miami (1826) states that certain reservations were made for tribal use. Article IV of the Treaty of Miami also discusses provisions, such as extra money ($100), a furnished wagon, a yoke of oxen, and a house built cheaper than $600, which were given to the nine principal chiefs of the tribe, such as Francois Godfroy, Francis LaFontaine, and Jean B. Richardville,

In all, Jean B. Richardville received "seven sections of land on the St. Marys River in the vicinity of Fort Wayne and two sections of land on the Wabash at the Forks."5 The plot location of the Richardville house on the west bank of the St. Marys River is defined in Article IX in the Treaty of Miami (1826) as being "one section of land upon the north side of the Wabash, to include a large spring nearly opposite the mouth of Pipe Creek." Originally, the Treaty of Miami (1826) states that the home given to Chief Richardville would have two rooms and one story in order to fit the $600 budget.2 However, Richardville added $1,600 to the renovation of a two-story home, which he believed he deserved as the principal chief of the Miami.

In May 1830, the US Congress passed the Indian Removal Act, which authorized President Andrew Jackson to negotiate treaties with tribes east of the Mississippi River, including the Miami. Despite efforts by the Cherokee Nation to use the federal courts to fight removal, coerced migration of Eastern Woodlands tribes was implemented. Tribal members from the Northeast, Southeast, and Midwest were forced to remove, under military escort, to lands west of the Mississippi River. Many became sick and died on the arduous journey west. Along with other Great Lakes tribes, numerous Miami people were removed to Kansas and then to Oklahoma while some remained behind, including Chief Richardville.

Today, the federally recognized Miami Tribe of Oklahoma continues to have an important legal, political and cultural presence in their original homelands, which include the State of Indiana.

5. Knapp, S. Horace. History of the Maumee Valley: Commencing with its Occupation by the French in 1680. Toledo, OH: Blade Mammoth Printing and Publishing House, 1872, pp. 364.

First Saturday of May to November 1pm-4pm.