The Navy Pier located in Chicago Illinois is the home to a number of attractions including the anchor of the USS Chicago (CA-136/CG-11). The Pier itself was named in honor of those navy personnel who served in the first world war and was later used as a training center for sailors during the second world war. The anchor was salvaged from the third ship named after the city of Chicago which was decommissioned in 1980. USS Chicago saw action during the Vietnam War earning itself numerous awards for meritorious conduct in the conflict.

USS Chicago monument from the front. 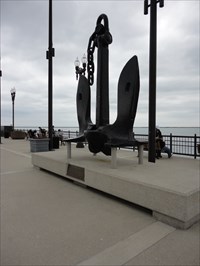 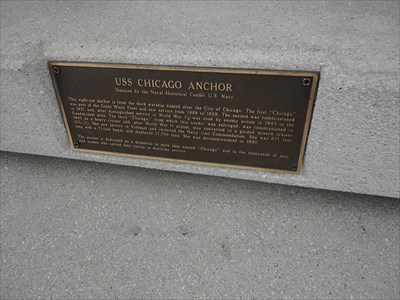 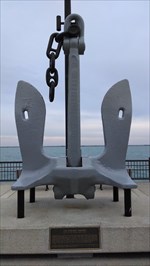 USS Chicago, a Baltimore-class heavy cruiser was first laid down on July 28, 1943 and commissioned January 10, 1945. The ship was named after the city of Chicago due to the fact that the wife of the Mayor of Chicago, Mrs. Edward J. Kelly sponsored the production of the ship. February 26, 1945 the ship set sail from Norfolk, Virginia to conduct training missions prior to setting sail for the Pacific Ocean. USS Chicago functioned as guard for carriers launching airstrikes against the Tokyo Plains early July. The ship then moved closer to the shore to conduct strikes against airfields, shipping, and railways. Later in July, the ship conducted more bombardments on ports along the coast of Japan until the end of the second world war.

After the war, the heavy cruiser was rebuilt to function as a guided missile cruiser. The redesign provided the cruiser with long-range air, surface, and sub-surface defense capabilities in support of ground task forces. From the San Francisco Naval Shipyard, the USS Chicago was recommissioned May 2, 1964. The ship took part in 5 different deployments to Vietnam to conduct land bombardment operations and patrolling throughout the Pacific Ocean.  These deployments consisted of touring and returning to the United States to refuel and to upgrade weapons systems and general maintenance on the ship. USS Chicago returned to San Diego from its last deployment in 1972. The following years the ship underwent training and evaluation until 1980 when the ship was deemed unfit for the modernization approved for the navy. Following the inability to upgrade the ship all equipment was stripped from the vessel and the ship was disassembled for scrap metal. The city of Chicago purchased the anchor to display on the pier as a memorial.

The anchor at the end of the Navy Pier stands as a monument of those who served in the navy and those who served on the USS Chicago. As a monument to the ship, the eight-ton anchor stands tall and is reminiscent of the cruiser that it accompanied. The USS Chicago was a 671-foot-long ship with a 71 foot beam weighing 17,700 tons. Over the ships lifespan it conducted a number of operations ranging from World War I when the original USS Chicago was sunk to the end of the Vietnam War when the ship was decommissioned. Serving in the Pacific Fleet, the cruiser earned a number of accommodations to included the Meritorious Unit Commendation and the Navy Unit Commendation. As of today the anchor stands as a memorial of the ship and those who served on it.