This site is denoted by a Historic Marker stating the approximate area within which the Battle of Mississinewa occurred during the War of 1812. The sign states the actual battleground is 2 miles west, but that may be private land now, only used for the reenactments. This battle was one of the few battles fought this far west and only one of a handful that actually occurred within what is now the State of Indiana.

Photo of the road marker (http://www.mississinewa1812.com/) 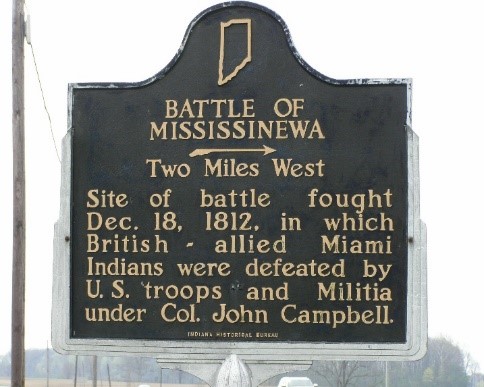 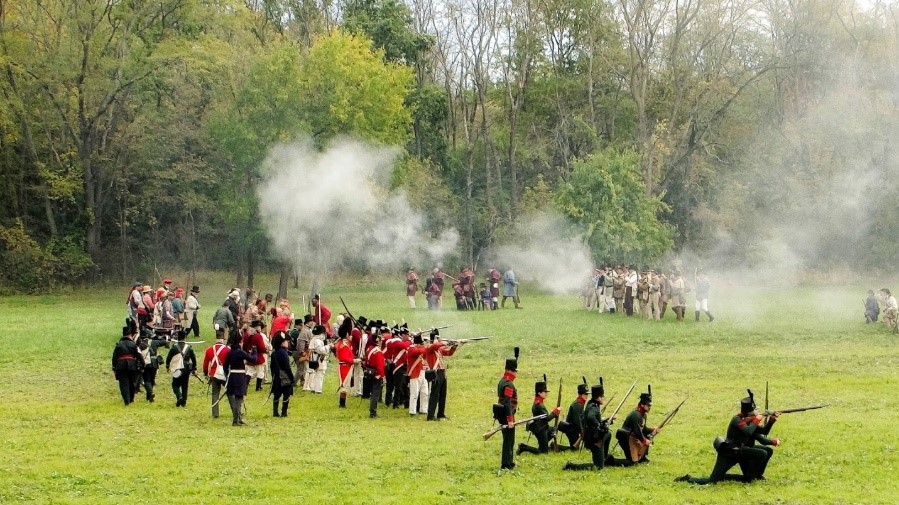 On the morning of December 17, 1812, Indiana Territorial Governor William Henry Harrison led an expeditionary force of US troops and militia members from Kentucky, Indiana, and Virginia against Miami Nation villages in the area in response to the recent attacks on Fort Wayne (see point on Siege of Ft. Wayne) and Fort Harrison that Governor Harrison blamed on the Native Americans, specifically on the Miami (1). One major aspect of this battle was the fact that the US troops, Harrison especially, were afraid of where Tecumseh was at the time, and there are military correspondence between the commanding officer and Harrison that discuss how close Tecumseh’s war party was to the troops during Harrison’s movement into the area. Tecumseh was as close as 15 miles away at one point (2).

On the morning of the December 18th the Indians counterattacked and tried to push the Americans back and out of the area but were unsuccessful. In the end 12 American soldiers lost their lives and a total of 38 Miami warriors and 10 Delaware warriors were killed (1). There is also written evidence within military commendation recommendation letters that say that the American troops were merciful with prisoners and did not just kill them all.They instead took many prisoners and also let many women and children go without harm.

Now at the site all that stands is a large wooden sign and then a road sign 2 miles east of the battle site on a main state road (3). However, every year in October the battlefield site hosts a two day historical reenactment of the battle open to the public.

More information can be found on the website listed below.

Note to visitors: There is a Native American cemetery and US military personnel buried on the battleground site so please pay the utmost respect to the individuals buried here.

Last updated by Brandon Ritter and Hannah Snider (Instructed by Cailín Murray, Ball State University) on May 7th 2017, 11:55:35 am.