In 1933, newsman Myron Scott was in Dayton, Ohio and saw a group of young boys racing their homemade cars and became fascinated by the event. Due to the fact that he was so fascinated and impressed by this event, he obtained a copyright and went searching for a sponsor. Chevrolet liked Scott's idea and in 1934 they sponsored the first All-American Soap Box Derby in Dayton. In 1935, the decision was made to move the derby to Akron which was a more central location and had a hilly terrain. Soon it was realized that a permanent track was needed and in 1936 civic leaders began working towards this goal. In 1936, the goal of a permanent track was realized through the help of the Works Progress Administration. The first race at the new track, known as Derby Downs, took place in 1936 and it continued to run until the start of WWII when a four year break was taken. Before the short break though, more changes and additions to the track were made. In 1938 grandstands were added in order to allow spectators to see more clearly and comfortably. As soon as the track reopened at the wars end, the derby continued and still continues to this day without any other breaks. The first girl competitors appeared in the derby in 1971 and in 1975 was the first time a girl won the All-American Soap Box Derby. Chevrolet remained the derby's sponsor until 1972 and all rights were transferred to the Akron Area Chamber of Commerce. In 1974 the International Soap Box Derby, Inc. was created to operate the derby and they continue to do so to this day. In 1975 Novar Electronics Corporation became the new national sponsor and in 2012 First Energy Inc. became the title sponsor. Various renovations and additions have taken place over the years to keep the keep the track and the stands in good condition to keep the races going. In 1997 in celebration of the 60th anniversary of the derby, the All-American Soap Box Derby Hall of Fame was established with Myron Scott, the original founder, as the first inductee. Competitors in the All-American Soap Box Derby still race homemade cars but have to follow certain regulations in doing so. Children from not only all over the country, but all over the world flock to Akron, Ohio each year to take part in and watch the long tradition of the All-American Soap Box Derby. For the 75th anniversary in 2012, more than 550 participants ranging in ages from 7-17 were able to represent their hometowns in the exciting event. Forty different states throughout the country were represented as well as representatives from countries including Canada, Japan, New Zealand and Germany. Taking part in the All-American Soap Box Derby is a time honored tradition and children work hard building their cars and racing in order to be able to take part. For more information on the history of the All-American Soap Box Derby and Derby Downs where the races take place or about the derby in general, visit http://www.aasbd.org/. 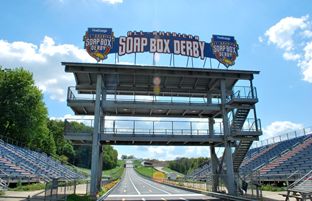