Artist's rendition of the Berdan Sharpshooters. 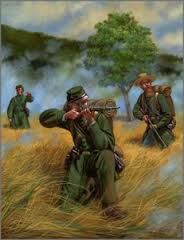 Recruiting poster for the Berdan Sharpshooters. 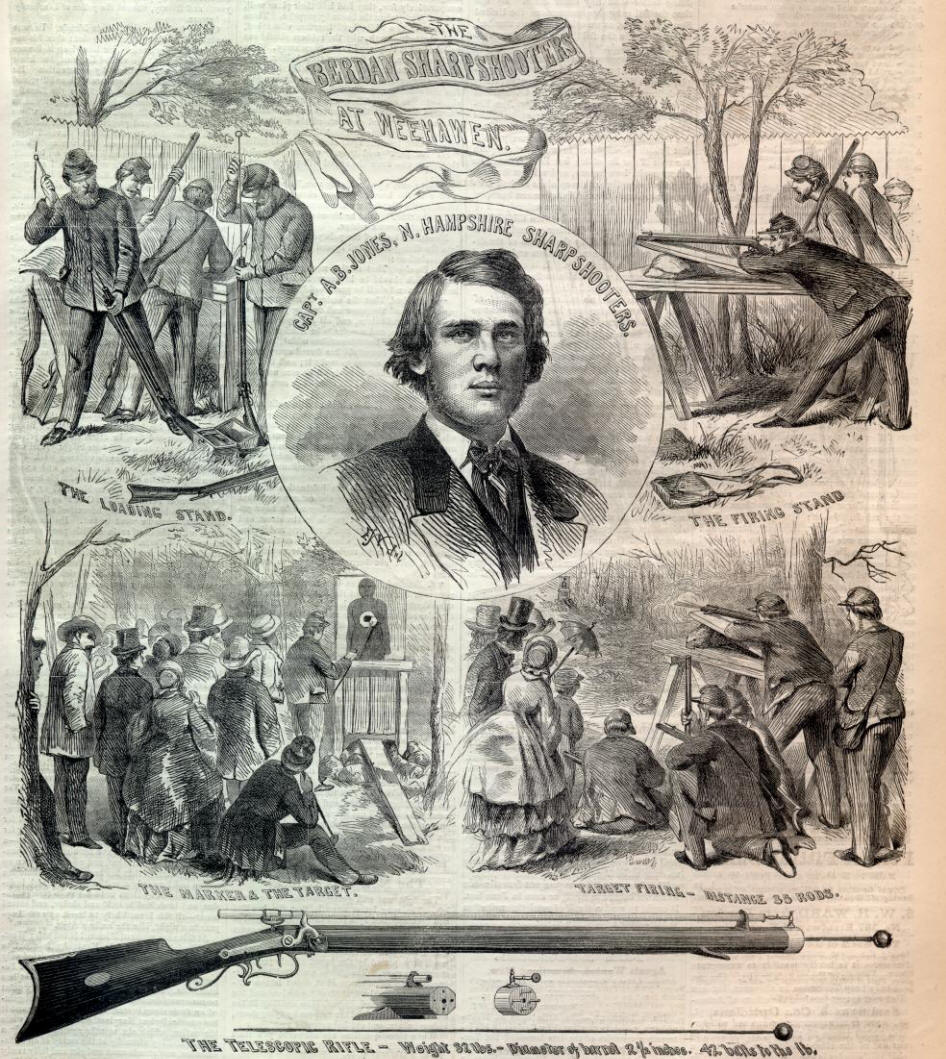 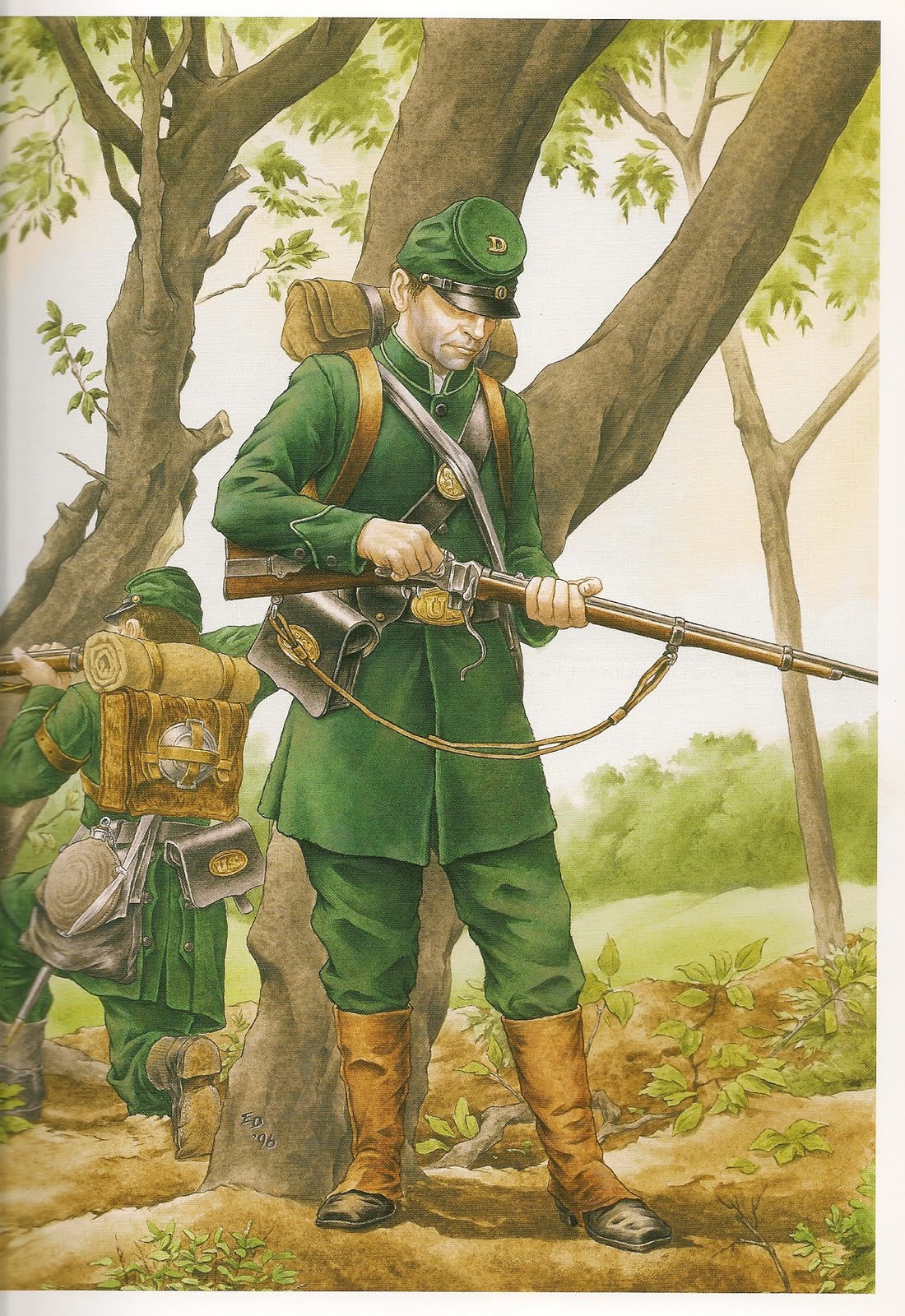 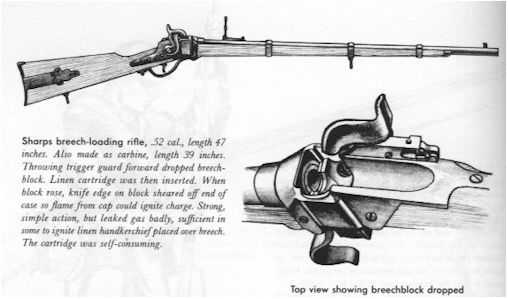 The monument to Berdan's Sharpshooters at Gettysburg 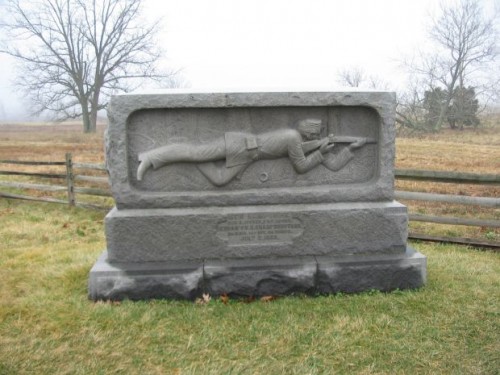 Before the start of the U.S. Civil War, Colonel Hiram Berdan saw the potential of more accurate rifles and hoped to update the tactics used by infantrymen. Berdan taught marksmanship, and after meeting with President Abraham Lincoln, Berdan was granted permission to create a unit of marksmen that would use precision shooting instead of mass firing at targets.

Distinguished by their green uniforms and specially adapted rifles, the Berdan Sharpshooters unit were some of the most effective precision shooters in the Civil War. In order to be selected for the unit, it was required to place ten shots into a ten-inch target at 200 yards while either in the kneeling or standing position, which ensured only the most elite marksmen became a part of the unit. Competitive target shooting was popular with upper-class men and the event became quite popular.

Units such as the Berdan Sharpshooters were not well known and sometimes it is difficult to know which group of soldiers they were facing. Sharpshooters would engage targets of importance such as officers and artillery crews, but the tactics used by the expert shooters were not typical of the day and the profession was not considered as honorable as the typical infantryman charging into battle. The sharpshooters would protect flanks, provide information to commanders on enemy troop movements and positions, and sometimes they deployed prior to a major engagement to harass enemy troops.

There were five units of sharpshooters in the Army of the Potomac, but Berdan’s Sharpshooters were the most famous. Colonel Hiram Berdan created the unit and its members carried .52 caliber Christian Sharps rifles. These weapons were breech-loading rifles with double set triggers; far superior to the standard issued rifles. Many members of Berdan’s unit also owned telescopic sites. The sharpshooters used tactics similar to skirmishers, but usually were in a fortified and hidden position and utilized their precision shooting to eliminate targets of opportunities.

Most of the standard issue rifles of the Civil War were muzzleloaders, and the breech-loading Sharps rifle used a self-contained cartridge that would increased the rate of fire. Between the training, skill, and the superior rifles, Berdan's men were able to hit targets beyond the range of the average rifle which created fear among the Confederate troops.

Americans at War (n.d.). In THE PRICE OF FREEDOM. Retrieved April 24,
2017, from http://amhistory.si.edu/militaryhistory/exhibition/flash.html?path=5.10.r_2