Furman University, founded in 1826, is South Carolina's oldest private university. The university, when first started was a theological seminary. Throughout the years, the school changed its location many times until ended up in Greenville, SC. It would become closely associated with Greenville's Baptist Female College sharing joint libraries and facilities, and eventually merging into one large university. In the 1950s the campus was relocated and today the campus is home to 2,662 undergraduate students. 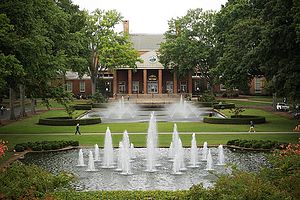 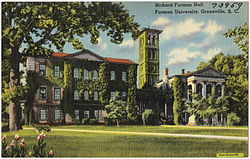 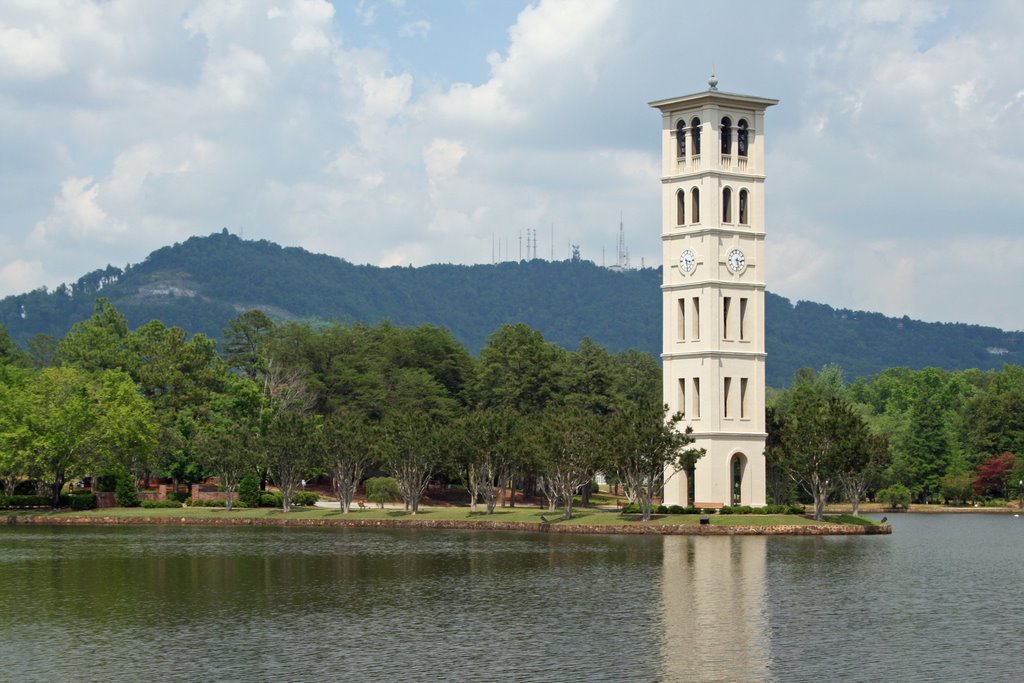 Furman University was first founded as an academy by the South Carolina Baptist Convention in 1926. The university was named after Richard Furman, who was clergyman and considered one of the most highly respected Baptist leaders of the time. First located in Edgefield, SC the university opened with only ten students and was set to train Baptist ministers. In 1829 the university moved once again to Santee, SC and became Furman Theological Institution. After moving two more times, the university was rechartered to Greenville opening in February of 1851.
The school was located on a twenty-five acre campus on the hill just across from Reedy River. A small wooden cottage, and a room in the Tiddman house were used as classrooms until the main building was completed in 1852. During this time, there was also a bell tower built. The bell tower was originally built as a part of the main building and would become the main symbol of the university. It was a signal to students for the start of classes, and victories on campus. With the completion of the main building and bell tower enrollment soared going from ninety-nine students to 206.
Due to increased enrollment, Furman University decided to foster a close relationship with the local Greenville Baptist Female College. The two schools began to share libraries and had joint clubs. The university gained its first president, James C. Furman, and the theological institution at Furman broke away in 1858 and shortly after the school would close temporarily from 1861-1865 due to the Civil War. After the school reopened a new president was appointed - Charles Manly. Under Manly's leadership the university's curriculum expanded, the campus became residential, and campus activities ensued.
In 1924, Furman University was named one of four collegiate beneficiaries of the Duke Endowment. Due to this, the university received much needed funds and resources. As the 1930s rolled around Furman University and Greenville's Baptist Female college merged into one. Since the campus was growing, the university moved to its current 750 acre campus in 1953. Many of the original buildings from the downtown campus were transferred to the new campus and the original bell tower was replicated.

Throughout the years, the university would become racially integrated in 1966. It also broke apart from the South Carolina Baptist Convention in 1992. The campus now has a "Gold Rating” from the Association for the Advancement of Sustainability in Higher Education, one of only 38 in the nation with this rating. Today it is home to 2,662 undergrad students and offers fifty-two majors. The university is significant for showcasing the growth of academic excellence and higher education in the state of South Carolina.