Along the Potawatomi forced march Westward on the Trail of Death, the Potawatomi stopped at this location. They stopped here because there were many who were sick and required care/ Due to this need of medical aid and the many Potawatomi on the verge of death, a Catholic Mass was conducted and the Potawatomi that died were buried. This marker is on the grounds of the Logansport Memorial Hospital in Logansport, Indiana 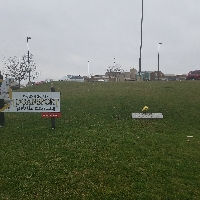 The marker reads "On this site in the fall of 1838, they celebrated a mass and received aid for the sick and buried their dead." 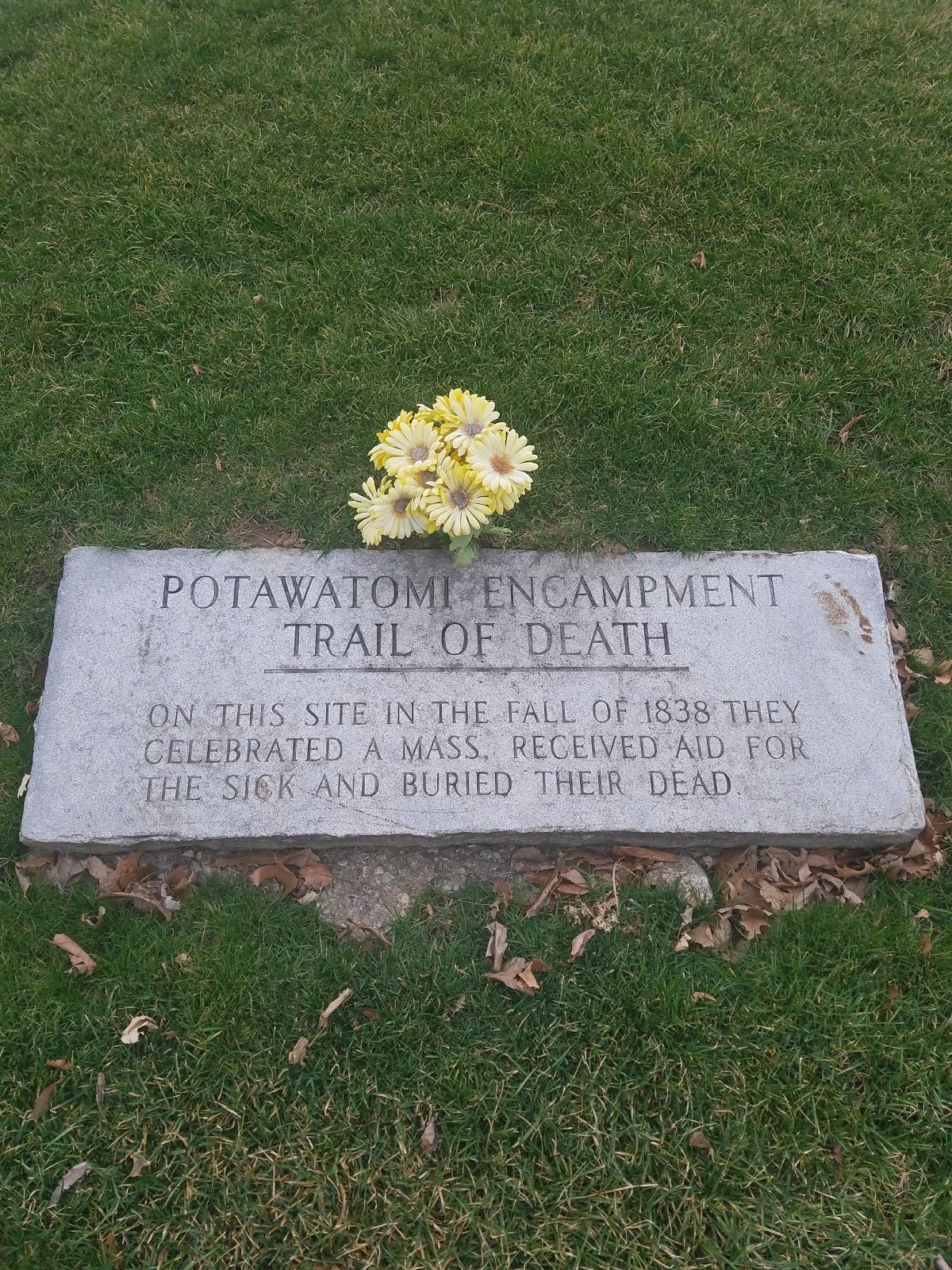 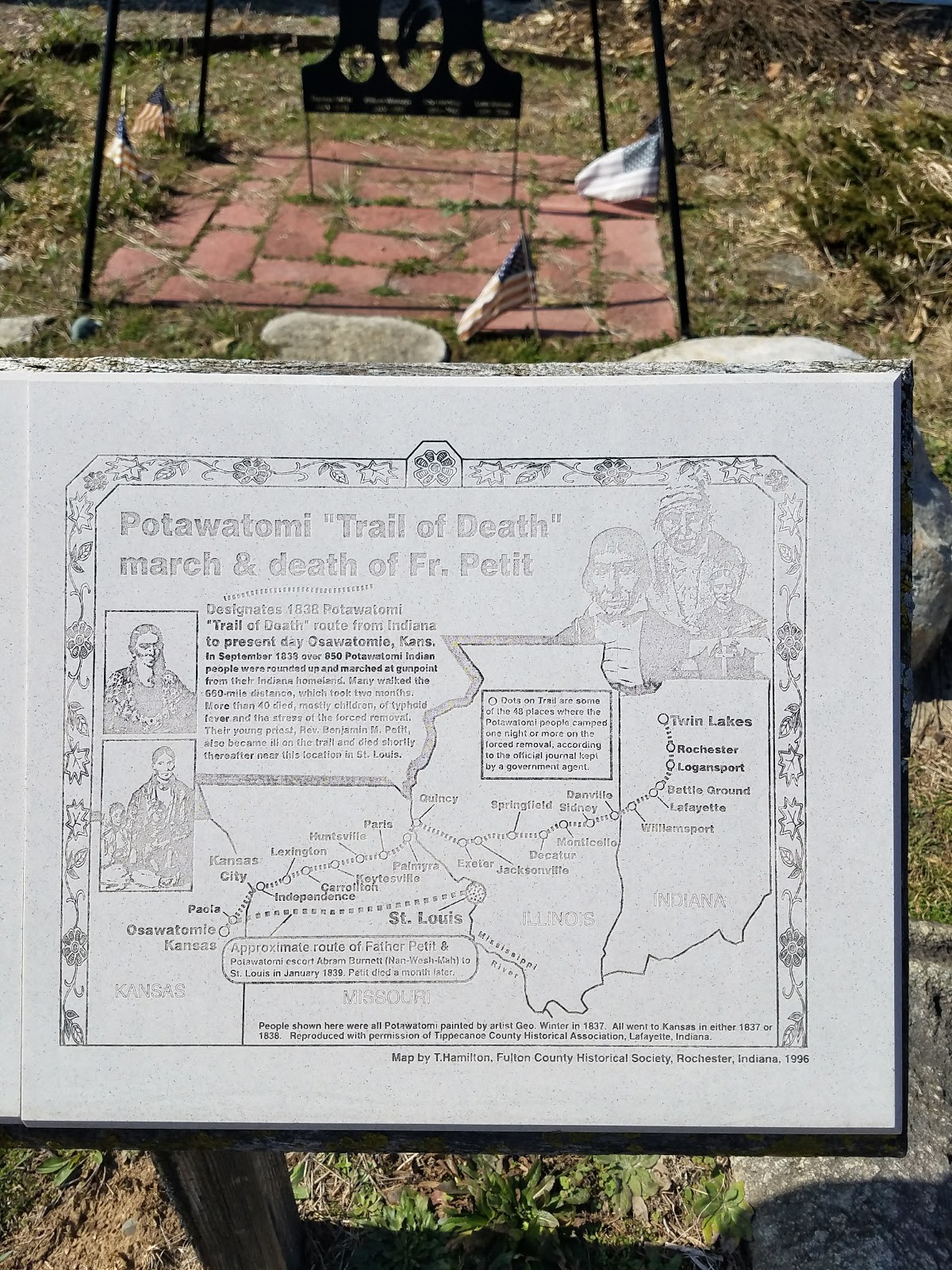 "Scene on the Wabash, 1848" by George Winter Depicts Potawatomi people cooking and washing on the Wabash river, near Logansport. 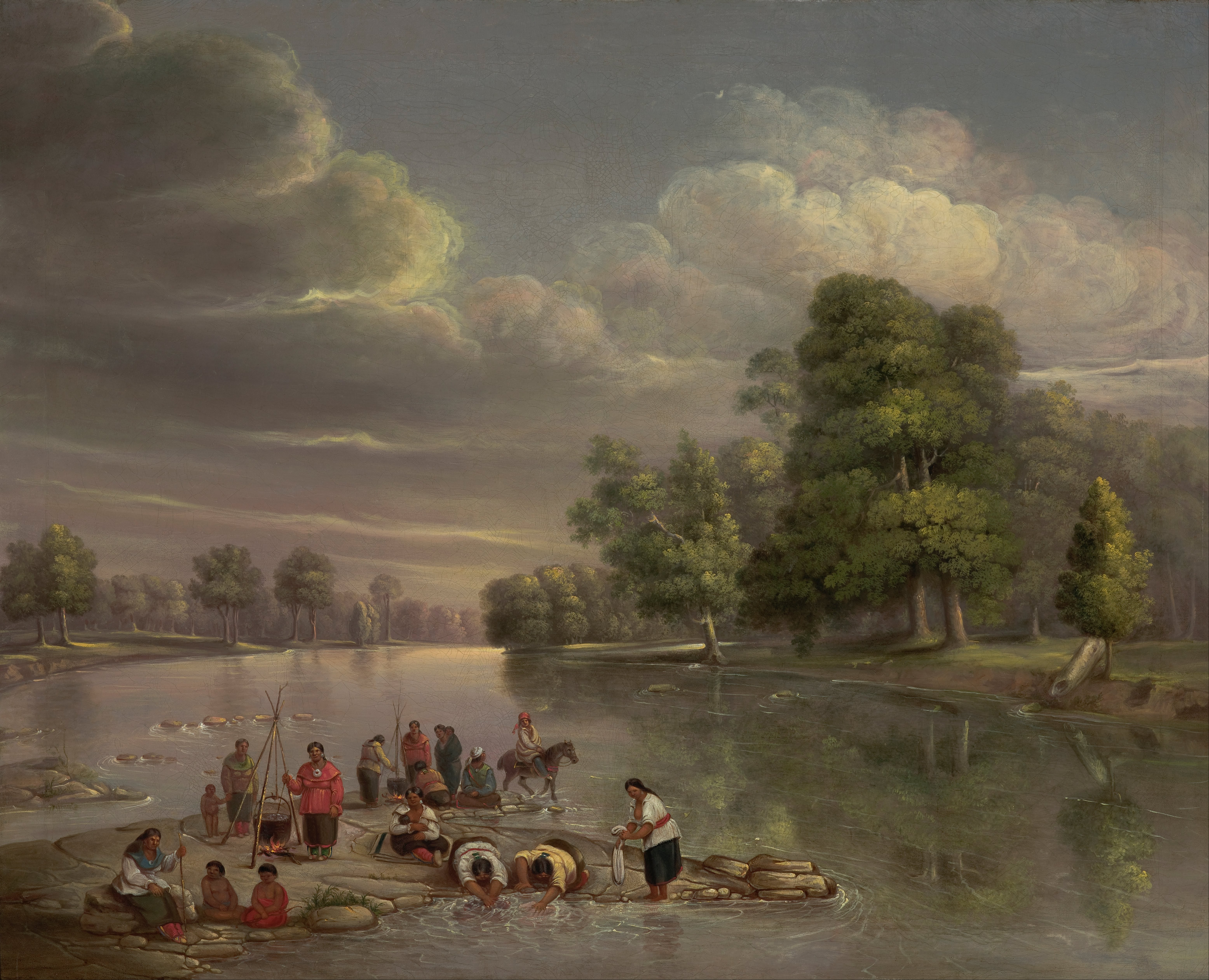 Compare Winter's 1848 painting to this sketch he made in 1838 depicting the removal of Potawatomi people from Indiana, see http://www.wiskigeamatyuk.com/index_start.html, accessed May 7, 2017.

What was the Trail of Death, and more importantly, why did it happen? This instance of forced removal is a not unique event of this time period. Many have heard of the Cherokee Trail of Tears and the forced removal of the Southereastern tribes. However, the Removal Act of 1830 resulted in the forced relocation of tribes from all over the Eastern Woodlands including the Great Lakes and the Midwest.  Simply put, Native American groups occupied land the United States desired for its own citizens. This, combined with political motivations and prejudice, was cause enough for Eastern Woodland Indians to be marched west of the Mississippi River to the Kansas and Oklahoma territories.  An Indian agent named Abel C. Pepper was tasked with using any means possible to get the Potawatomi to sign a treaty to give up their communal lands at Twin Lakes and remove westward. The Americans sometimes used unethical ways to accomplish the goals of treaty making.

Americans used any means necessary, including providing alcohol, to get Potawatomi to put their x mark on the treaties. Chief Menominee, their leader, never signed these treaties. Menominee even tried to gain the support of the President to let him remain on their lands. But this was unsuccessful.

After false reports of conflict between white settlers and Potawatomi in the area, the Governor of Indiana, David Wallace, commanded General John Tipton to remove this group of Potawatomi to the West. In the Fall of 1838 Tipton and a group of volunteer militiamen rounded up the Twin Lakes Potawatomi and began their removal. This group made stops in, Rochester, Logansport, Battle Ground, Lafayette, and Williamsport in Indiana along their route to Eastern Kansas. On November 4,1838 the Potawatomi reached Osawatomie, Kansas the final destination along the Trail of Death. Along the way over 40 individuals had died due to the harsh conditions along the trail, and around 60 had escaped and made their way back to Indiana.1 The official muster roll kept by General Tipton indicates that 859 Potawatomi started from Twin Lakes, and the total at the end of the journey there was 756.

On September 9, 1838 the Potawatomi from Twin Lakes made a stop in Logansport, Indiana. Logansport was the second stop along their 660-mile march. According to a journal that was kept by Benjamin Marie Petit, “when the Potawatomi reached Logansport, there were over 300 sick people. Because of the large amount of sick, a ‘medical hospital’ was erected to tend to the them. The sick were in danger of dying without medical attention and by the end of the night, 5 children had died. Before these children died, the two most sick were blessed after the Catholic Mass was held. This Marker was placed on the location of where the camp was set up. On September 10, 1838, all but 21 of the Potawatomi departed the camp and continued their journey towards Osawatomie, Kansas.

George Winter (1809-1876) was an English born painter who moved to Ohio in 1835. Winter arrived to the region amid talk of Indian removal. He visited Indian communities and encampments to paint Potawatomi and Miami people on the eve of their forced removal from the Great Lakes. In addition, Winter painted images of daily life and nature in the Great Lakes and Ohio valley (3).

In the 21st century there are three federally recognized Potawatomi tribes in Oklahoma, Kansas and Michigan. While they share cultural and historical ties, they are three distinct tribal nations. They host annual events like powwows that are open to the general public. See their official websites below to learn more about these contemporary Native American nations.

3. Sarah E. Cooke and Rachel B. Ramadyani, Indians and a Changing Frontier: The Art of George Winter (Indianapolis: Indiana Historical Society in Cooperation with the Tippecanoe County Historical Association), 124-125.