On June 25, 1876, George Armstrong Custer led his small battalion against a large number of Lakota and Cheyenne Indians. This small force was decimated in a matter of hours with no survivors. The reaction to the news of Custer's death back east was one of disbelief and sorrow. The Custer Battlefield Museum is located at the site of Sitting Bull's camp prior to the Battle of the Little Bighorn. The museum collects artifacts to help educate visitors on the Western Migration Movement and the Battle of the Little Bighorn. 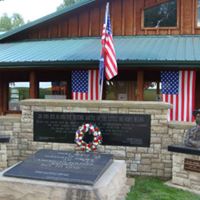 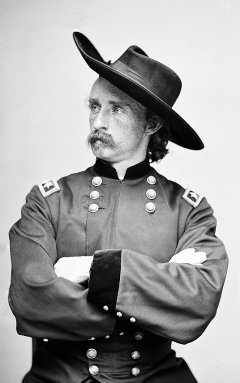 George Armstrong Custer was born in Ohio in 1839.  He lived with his half-sister and brother-in-law in Michigan when he graduated from a Normal School in 1855.  After a two year stint as a grammar school teacher, Custer entered West Point in 1857.  When the Civil War broke out in 1861, Custer was graduating last in his class of thirty-four cadets.  In 1862, Custer met his future wife, Elizabeth Bacon.  By 1863 he was given the rank of Brevet Major General and then assumed the command of a cavalry brigade.  At the Battle of Gettysburg, his unit clashed with J.E.B. Stuart’s cavalry and Custer’s actions helped protect the Union rear. During the course of the Civil War, Custer always seemed to distinguish himself as an aggressive and flamboyant leader. He continually gained the respect of his men and peers with his fight from the front approach.

When the Civil War ended , Custer was demoted back to his permanent rank of Captain.  Yet in 1866, he was commissioned a lieutenant colonel and given command of the new 7th Cavalry that would be assigned to the western United States.  After a brief unauthorized visit to his wife, Custer was court-martialed and suspended from duty.  General Philip Sheridan later restored Custer’s rank and returned him to duty.  By the summer of 1874, gold had been discovered in the Black Hills of South Dakota.  This would be the start of the Indian uprising that culminated in 1876 in Montana.  Under orders from General Alfred Terry, Custer’s division was to be part of a two-prong attack.  A large native settlement was discovered prompting Custer to divide his forces into three battalions.  On June 25, 1876, at Little Bighorn, Custer’s impatience cost him and two hundred sixty-five others their lives.

The Custer Battlefield Museum opened in 1995 in Garryowen, Montana.  The museum is currently under the leadership of Director Christopher Kortlander.  There are many exhibits and artifacts that have been excavated from the site of the Battle of the Little Bighorn on display.  Prior to the 50th anniversary of the battle, the remains of an unidentified soldier was found and now lies in the Tomb of the Unknown Soldier.  These are the only military remains to not rest in a national cemetery.  Flanking the tomb are busts of George Armstrong Custer and Sitting Bull called the “Peace Monument.”  The museum has received the Montana Governor’s Award for Tourism.

Powers, Thomas. How the Battle of Little Bighorn Was Won. Smithsonian Magazine. November 01, 2010.