Also known as the 1854 Lighthouse, the original Point Loma Lighthouse is a historic lighthouse located on the Point Loma peninsula at the mouth of San Diego Bay. It is situated in the Cabrillo National Monument. It is no longer in operation as a lighthouse but is open to the public as a museum. It is sometimes erroneously called the "Old Spanish Lighthouse", but in fact it was not built during San Diego's Spanish or Mexican eras; it was built in 1855 by the United States government after California's admission as a state. 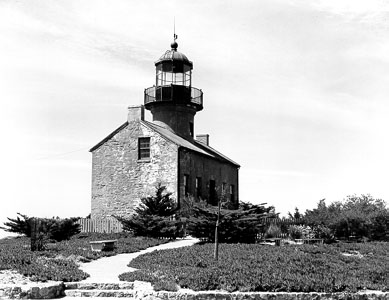 The lighthouse was built in 1854. It no longer active but is now a museum. 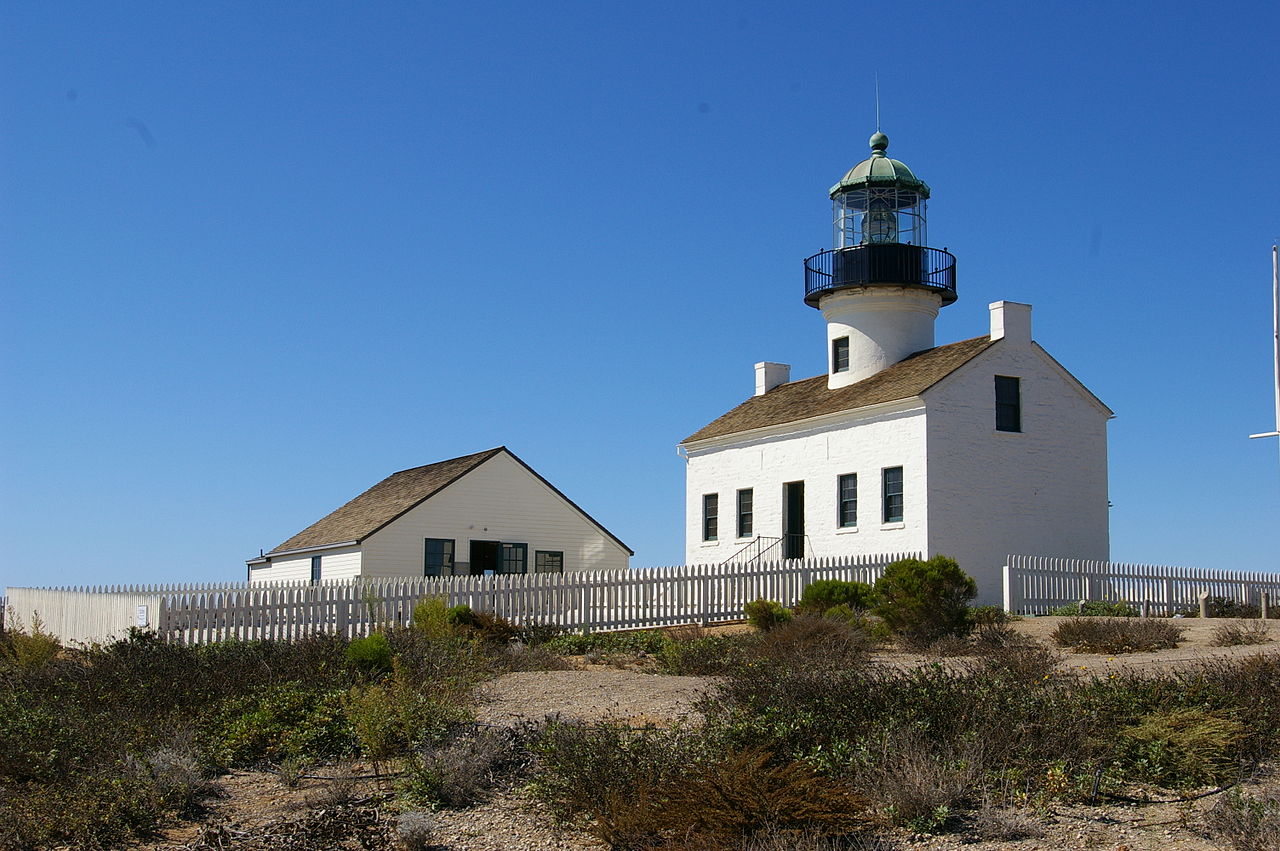 Miniature plaque showcasing how the lighthouse would have looked in 1875 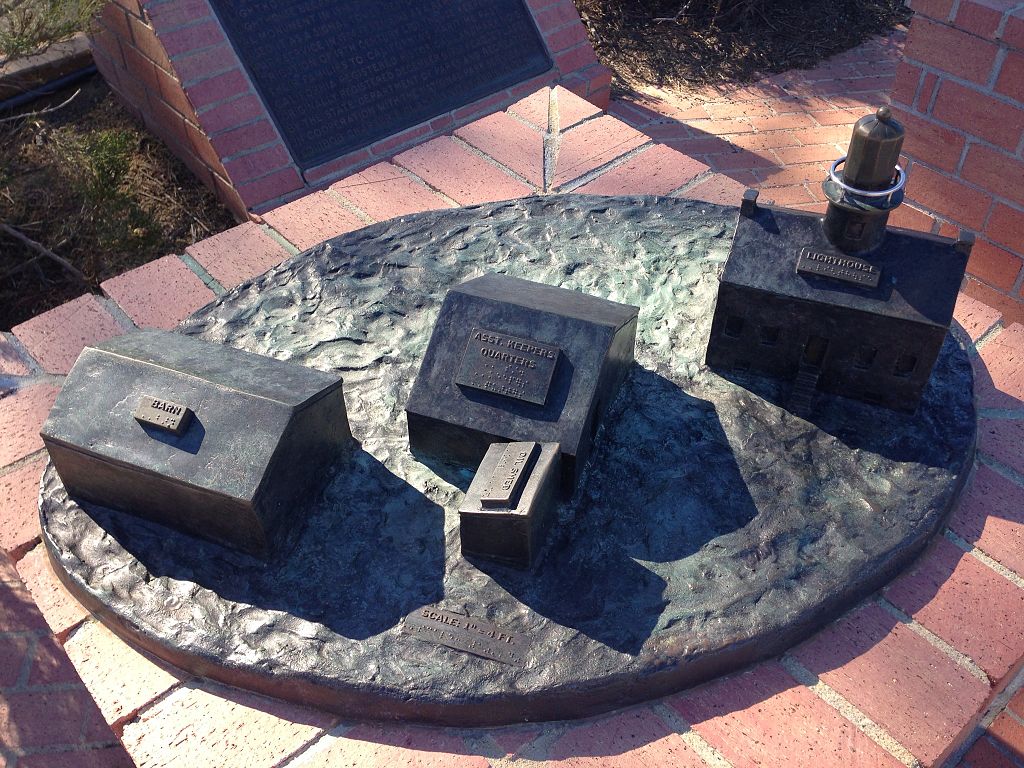 The lighthouse as it appeared in 1965. 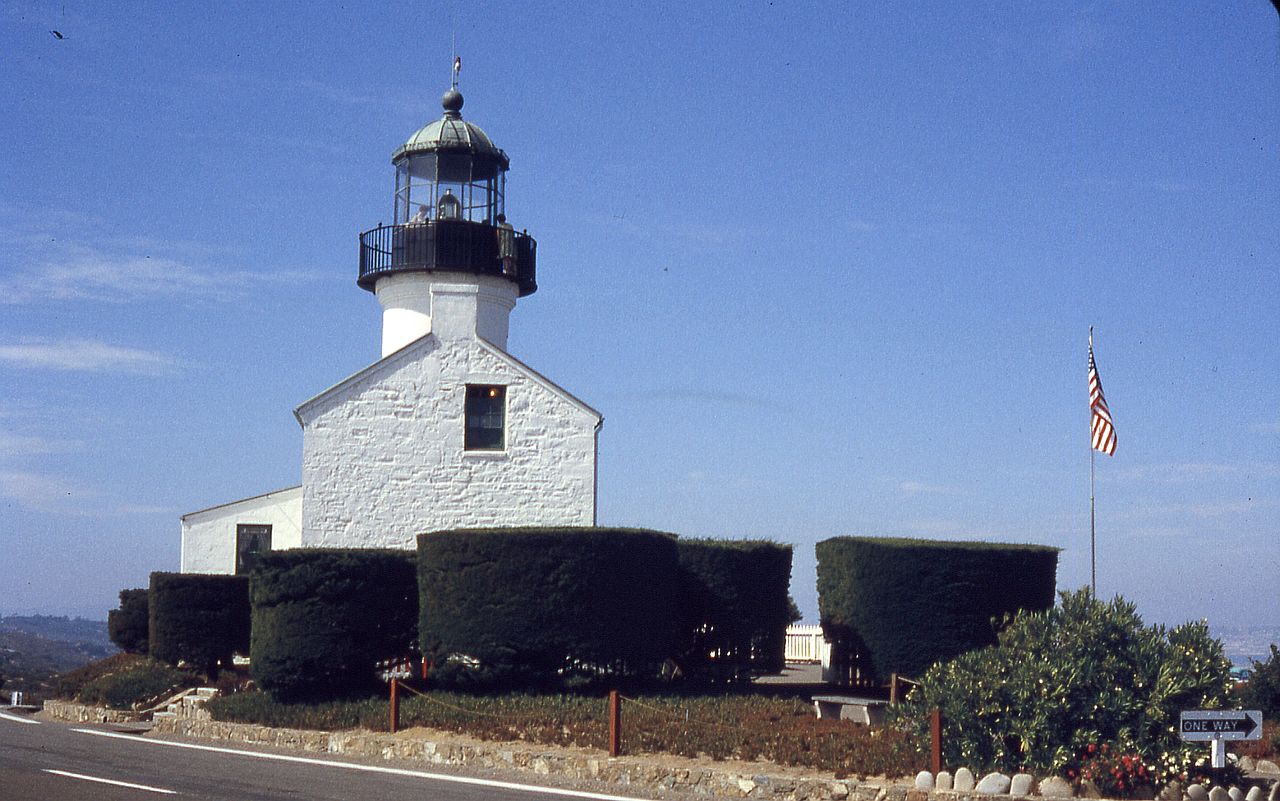 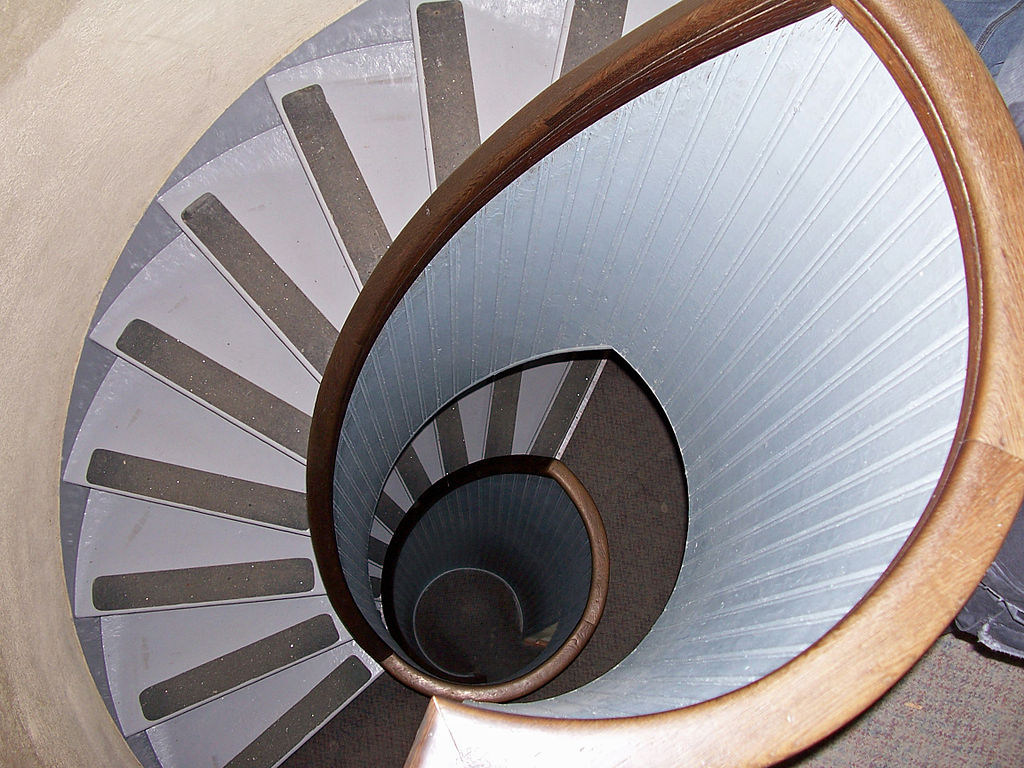 Closeup look of where lighthouse keepers would keep watch; aka the Crows Nest. 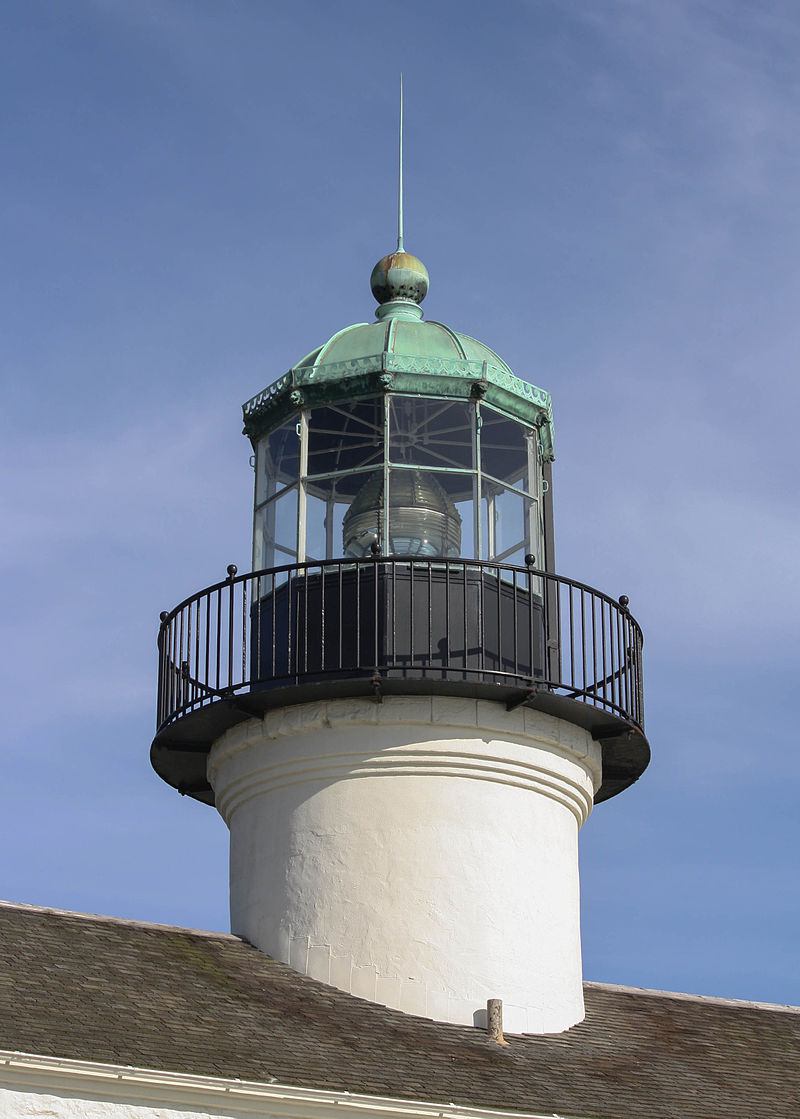 On September 28, 1850, just 19 days after admitting California to the Union, Congress appropriated $90,000 to construct lighthouses along the California coast. A second appropriation of $59,434 was made in 1854 to complete the job. Lighthouses were designated for Alcatraz Island, Point Conception, Battery Point, Farallon Island, Point Pinos and Point Loma. A site was chosen in 1851 near the summit of Point Loma. The contract was given to the Washington, D.C. company Gibbon and Kelley. The local supervisor was William J. Timanus.
Construction was begun in April 1854, when a shipment of materials arrived from San Francisco. The lantern and lens had to be ordered from Paris and arrived in August 1855. The lighthouse was completed by October 1855 and was lighted for the first time at sunset November 15, 1855. It was designated light number 355, of the Twelfth United States Lighthouse District.
When the lighthouse was constructed, an additional small structure was built next to it. This building was originally used as a storehouse for oil, wood, and other supplies. However, in 1875 part of it was converted into a two-room apartment for the assistant lighthouse keeper. It was built with rough lumber and the inside was lined with cloth and paper, since cracks would frequently develop in the walls. This thin lining was later replaced with tongue and groove boards. More repairs must have been made in 1880 for the structure was still being used as a living space for the assistant. Today this building has been changed once again, and now serves as a museum. It holds the original lens of the New Point Loma lighthouse as well as maps and more information about Point Loma and its history.
While in operation the lighthouse had the highest elevation of any lighthouse in the United States. However, the location on top of a 400-foot cliff meant that fog and low clouds often obscured the light from the view of ships. On foggy nights the lighthouse keeper would sometimes discharge a shotgun to warn ships away. On March 23, 1891, the flame was permanently extinguished and the light was replaced by the New Point Loma lighthouse at a lower elevation.
In 1984, the light was re-lit by the National Park Service for the first time in 93 years, in celebration of the site’s 130th birthday. More than 3,000 people attended the celebration, including more than 100 descendants of former lighthouse keepers Robert and Maria Israel.

Robert Israel:
San Diego pioneer Robert Decatur Israel was lighthouse keeper for the longest period of time, 18 years. He was born in Pittsburgh, Pennsylvania on March 23, 1826. His father was described as Pennsylvania Dutch and mother as Scotch-Irish. He wasn’t Jewish, but because of his surname many people today mistakenly assume that he was. He had fought in the Mexican-American War, including the famous Battle of Chapultepec. He and a young Mexican bride, Marie Arcadia Alipas, were married by a priest in 1852 at the Casa de Estudillo in Old Town. They had four children: Henry Clay Israel, Joseph Perry Israel; Robert Lincoln Israel, and a second Joseph Perry Israel, born after his older brother had died.
Israel was appointed assistant lighthouse keeper in 1871 and promoted to lighthouse keeper in 1874. His wife Maria was the assistant keeper, like most wives of lighthouse keepers. Their family lived alone on the Point, making sure that the lighthouse was illuminated each night. The Israels lived and worked on Point Loma for 18 years, where they watched their children and grandchildren grow up. One of their grandsons was born at the lighthouse.
Because of the fog, another lighthouse was built closer to the Pacific Ocean shore line, in the area adjoining Cabrillo National Monument now occupied by a U.S. Coast Guard Station. On March 23, 1891 the old light was extinguished and the new one lit. Israel took over the new location but was dismissed as the lighthouse keeper in 1892. He died at age 81 on January 12, 1908. He is buried at the Fort Rosecrans National Cemetery. His grave 74 in section 75 is marked by a stone with a Christian cross. Some of his descendants now serve as volunteer re-enactors at the lighthouse.

Life in the lighthouse:
The Old Point Loma Lighthouse was not just the housing for a light; it was also the home of the people who took care of the light. The keepers and their families lived in the lighthouse. Visitors can now view some of the rooms to see what their life was like. The lighthouse was a bustling family home. The Israel family, including their three surviving boys and a niece, all grew up there. They gardened, kept horses, and raised chickens, pigs and goats. The children rowed across the bay to Old Town each day for school. People from town would sometimes drive by horse and buggy over a dirt road (now Catalina Boulevard) to picnic and visit the lighthouse and its keepers.

Deactivation and afterwards:
After the lighthouse was deactivated it fell into disrepair. In 1913, it was proposed to tear down the dilapidated lighthouse and replace it with a monumental statue of Juan Rodríguez Cabrillo. The statue was never made, but to accommodate it, one-half acre around the lighthouse was set aside as Cabrillo National Monument by Presidential Proclamation. Cabrillo National Monument was turned over to the National Park Service in 1933. By 1935 the metal lantern room had been rebuilt and the lighthouse restored to its original condition. A concessionaire lived in the lighthouse, offering tours of the building and operating a tea room in the southern room on the main floor.

With the outbreak of war in 1941, the lighthouse was painted camouflage green and was used as a signal tower to direct ships into San Diego Harbor. After the war the lighthouse was returned to the National Park Service. During the 1980s it was restored and filled with period furnishings to resemble its appearance when the Israel family lived there. In 2003-2004 the surrounding area was also restored to a more authentic look, including native plants, a vegetable garden, and a water catchment system. The lantern room currently houses the third-order lens from the Mile Rocks Lighthouse.

Today the lighthouse is no longer in service but stands as a landmark and museum. Visitors may enter the lighthouse and view parts of the living quarters there. Visitors are sometimes greeted by volunteer historical re-enactors including "Captain Israel", a real historical figure who was lighthouse keeper from 1871 to 1892, or "members of the crew" of Cabrillo's ship.

Although the tower of the lighthouse is normally closed off to the public, there are two days a year when it is open. These dates are August 25, which is the National Park Service’s Birthday, and November 15, which is the Lighthouse's Anniversary.

The names of the lighthouse keepers were: