The protests that took place on Kent States campus, like many others, began as peaceful demonstrations although some local businesses suffered from broken windows and other damages. Due to fear of local residents and business owners the mayor of Kent called in the Ohio National Guard who arrived on Saturday night. That same night the ROTC building on campus was burnt to the ground by some demonstrators. The governor of Ohio arrived in the city the next day making the announcement that the University would remain open despite the recent protests. Monday at noon, thousands of people arrived on campus, both students and non-students, to participate in another demonstration. The demonstration started off as any other peaceful demonstration that took place throughout the Vietnam War. After a week of increasing tensions, including the burning of the ROTC building by an increasingly militant crowd, the National Guard was mobilized. Some say that protesters responded to the Guardsmen by throwing stones and yelling various things. Others say that the crowd remained completely peaceful. The response of the Guard at this point was to throw tear gas but the desired affect was not achieved due to the wind. Next the Guard tried enforce the Ohio Riot Act with bayonets raised in attempt to get demonstrators to retreat, which also did not work. The main location of the demonstration was on Blanket Hill and as they guard reached the top, some members of the guard turned towards the Taylor Hall parking lot and began to fire into the crowd. Between 61 and 67 shots were fired killing four and wounding nine. Some of those killed and injured that day were not part of the demonstration as they were walking past on their way to or from class. Later that day the University was officially closed for a short period of time. 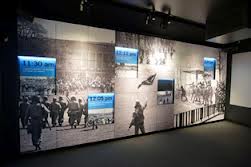 On April 30, 1970 President Richard Nixon made an announcement stating that American troops would be moving into Cambodia. The United States was already officially involved in Vietnam, Cambodia's western neighbor. The Vietnam War had caused a great deal of tension among our countries citizens and the anti-war movement increased as the war continued. After the announcement by the President that U.S. troops would be moving into Cambodia, protests began taking place throughout the country. Most thought that this movement was a widening of the war when the hope of many was that the war would soon be over. Kent State University was one location of these protests that took place after the April 30th announcement.

The May 4th shootings have remained a large part of Kent State University and on May 4, 2013 the Visitors Center commemorating the event was finally opened. On May 4, 1990 the permanent memorial on campus was dedicated and there is a specific part of the University Library dedicated specifically to collecting items pertaining to the tragic event. The Visitors Center provides detailed accounts and information about the demonstrations that weekend as well as the shootings that took place on that Monday afternoon.