The Battle of Fort Henry occurred on February 6, 1862. Fort Henry was the first major victory for the Union in this section of the nation during the American Civil War. The purpose of this battle, and later the Battle of Fort Donelson, was to gain control of all the waterways for the western theater to move supplies and troops. The Battle of Fort Henry saw Union forces under Brigadier General Ulysses S. Grant, and Flag Officer Andrew H. Foote defeat the Confederate defenders under Brigadier General Lloyd Tilghman. In addition to serving as a turning point in the battle for control of this region, it was first river battle that involved ironclad gunboats.

Fort Henry shortly after the Union had taken possession of the fort. Notice how the part of the fort in the foreground is pictured under water from the rising of the river.

The marker is four miles South of the location of the fort where the Confederates attempted to control this area of the Mississippi River. 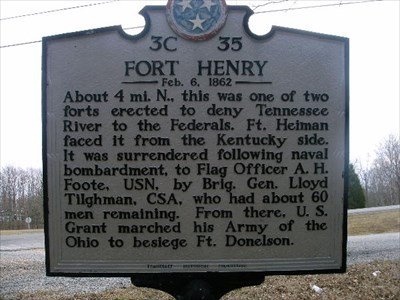 Fort Henry covered about three acres in Henry and Stewart counties in Tennessee. The rifle pits extended two miles east and towards the river. The fort had twelve heavy guns facing the river and five fortifying the land. Eight of the heavy guns were without adequate ammunition, leaving only nine heavy artillery pieces to control the river. Furthermore, Fort Henry had fewer than 3,000 soldiers.

On February 2, 1862, the Union started making its way toward Fort Henry. Leaving Illinois, four ironclads led followed by three wooden ships armed with supplies and more guns. Brigadier General Grant’s men were transported three miles from the fort, just outside of the Confederate defender's range. Early on the 4th of February, Brigadier General Tilghman learned of the Union advance and left Fort Donelson to defend Fort Henry. He requested reinforcements, but no troops arrived.

Part of Fort Henry was flooded and under the Tennessee River due to the rain, further adding to the Confederate defender's dilemma as Union forces advanced. On February 5, 1862, three gunboats from the Union approached and fired, rendering a response from the Confederates. Grant ordered a land and water attack for the morning of February 6, 1862 in hopes of attacking before reinforcement might arrive and aide the outnumbered Confederates.

Before the Union attacked on the February 6, Brigadier General Tilghman had ordered his men to retreat to Fort Donelson only leaving men on the heavy guns. Flag Officer Foote began the battle with one shot from one ironclad and then the rest fired. The Confederates hit the middle boiler of the ironclad Essex, killing and wounding around 30 Union troops. Despite the accident, Union gunboats were able to take out three Confederate heavy guns leaving them with four to finish out the fight, Brigadier General Tilghman surrendered. When Brigadier General Grant’s foot soldiers had arrived, the battle was already over.

The Union took possession of the fort and the supplies since the Confederates had quickly left on foot to Fort Donelson. Ten days later, Brigadier General Grant took control of Fort Donelson giving the Union control over important waterways and a key victory in the larger battle aimed at controlling the Mississippi River Valley and the Southern tributaries of the Mississippi River.