Topeka maintained separate schools for white and black elementary and middle school students until the landmark 1954 Supreme Court decision Brown v. Board. However, Kansas law barred racial segregation at the high school level. (In the early 1900s, however, whites in Kansas City, Kansas petitioned for a special amendment to that law that legalized separate high schools in their city.) Just because the law required that school districts maintain racially-integrated high schools did not mean that white and black students were treated equally. Topeka High School barred black students from their sports teams and cheer squads. As a result, black students started their own teams and squads with their own money. This image shows the Topeka High Ramblers and their cheerleaders playing a "home game" at Sumner Elementary because they were not allowed to use their own gym.

Black students formed their own teams, debate squads, and student clubs because Topeka High School barred their participation in extracurricular activities until the 1950s. 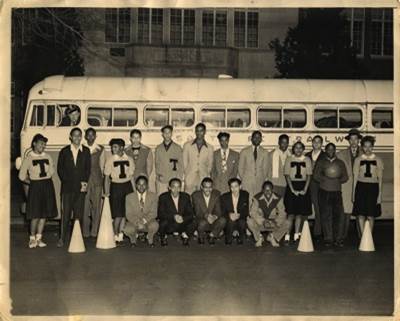