On April 15, 1948, students from the University of Kansas chapter of the Committee on Racial Equality (CORE) held a sit-in at Brick’s Cafe. Like many other Lawrence establishments, Brick's Cafe refused to serve African-Americans. Brick's Cafe was selected because of its proximity to campus and the fact that it depended upon the business of students-a group that was often more friendly towards racial integration. Black and white students participated in a peaceful sit-in until white residents and students attacked the protesters. Although this demonstration and other sit-ins on Midwestern campuses following World War II did not end segregation immediately, students and supporters of civil rights followed their demonstrations with petitions and various measures that gradually ended explicit racial discrimination in these college towns long before the more famous sit-ins of the 1960s.

Brick's Cafe was located directly north of the Kansas Union in the area now occupied by the Union's parking garage. 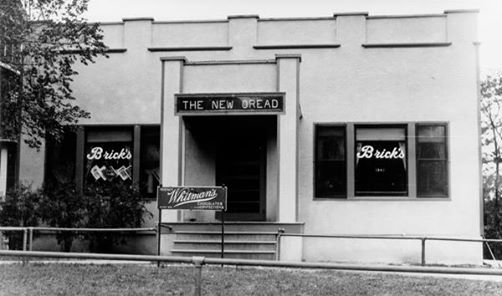 The campus newspaper reported that Lawrence police stood by while 15-20 white males physically removed the protesters from the restaurant.

White counter-protesters physically ejected the Black and white members of CORE, leading to one injury when a demonstrator was pushed down the stairs 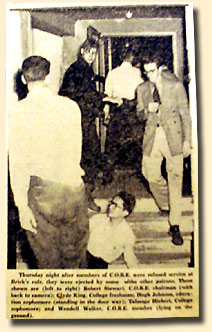 The following excerpt from Douglas Harvey's article (full text available by clicking on the link below) describes the protest. "On April 15 beginning at 4 p.m., white CORE members and their supporters, about 11 women and 20 men, slowly began filling the seats of Brick’s Café. Around 4:45, mixed-race groups entered and sat at the booths with the white CORE members. A female CORE member took up a position by the front door and began handing out handbills explaining the group’s actions. Reporters from the University Daily Kansan were in the café most of the time, although owner Murphy escorted a Kansan photographer out of the restaurant. Murphy asked CORE chairman Robert Stewart if he was there to negotiate, which Stewart had tried to do on several occasions, and he replied, “Yes, if you wish.” Murphy responded that he did not wish to and that Stewart should understand that he and his party would not be served.

By 6:00, about 15 or 20 white males (termed “huskies” in CORE’s report of the incident), were standing around inside the café, obviously there to provide the owner with some assistance. Witnesses recognized several of them as being on the football team. At about 7:15 the “huskies” gathered into a huddle with the owner, after which they approached an African-American in the back booth. This individual had been a former CORE chairman, and was an ex-G.I. who had served overseas. The “huskies” told him he was trespassing and that he had to leave. When the man refused, he was dragged out of the booth and onto the floor. He then got up and sat back down in the booth. At this, a couple of the “huskies” began to badger the man about being “yellow,” for not fighting them. The man replied at some length about the group’s reasons for being in the café, that they were not interested in doing harm to anyone but were there only to make a point. The huskies then moved to the next booth where the CORE Chairman Stewart was seated.

At this point in the proceedings, the Lawrence police arrived. After a brief discussion over what, if any, charges could be brought, one of the policemen stated that as far as he was concerned, the football players and their friends could throw the CORE members out of the restaurant. And with that, the “huskies” proceeded to physically carry the protesters out the front door and drop them on the steps. The non-violent nature of the protest kept the situation from escalating, although at least one minor injury was reported when one of the demonstrators was pushed down the front entrance stairs. “It’s been quite a show tonight hasn’t it?” said a female CORE sympathizer as she paid her bill.

Quite a night indeed, and it was just the beginning. The Brick’s Café sit-in was hardly the end of CORE’s efforts to integrate the KU-area restaurants. In 1949, CORE came up with a tactic to counter the café owners’ mantra that integration would hurt their business. Helped by the Lawrence League for the Protection of Democracy, the All Student Council, the Ministerial Alliance, and the American Federation of Teachers, CORE began selling “meal tickets” for $1.00. All proceeds would be used to pay the owners in cash to integrate their establishments. If the owners refused, all those with a meal ticket would be reimbursed."

Racial discrimination did not end in 1948, although the protests were effective in breaking the color line in some restaurants. Advocates of racial integration tried another approach in 1950, offering five different proprietors $500 a piece if they would agree to serve all patrons regardless of race. All five proprietors refused.

This entry was made possible through research conducted by historian Douglas Harvey for the University of Kansas website, KU history, http://kuhistory.com/articles/its-been-quite-a-show-tonight-hasnt-it/ accessed February 5, 2015