The Circle Theater opened in 1916 as the city's first “movie palace”---and one of the first such buildings in the Midwest. Today it is the second-oldest building on Monument Circle, after Christ Church Cathedral, and is home to the Indianapolis Symphony Orchestra. The theater was designed by the prominent local firm of Rubush and Hunter in a Neoclassical Revival style. The exterior is white terra cotta, featuring a frieze of classical Greek figures. Inside, a detailed bas-relief proscenium, plaster molding throughout the house, and other details render the interior among the most historic in the city. In fact, the interior is one of only two interiors in the city that has been granted historic landmark status and official city protection. The theater was renamed after Stephen Hilbert, a local businessman, and his wife Tomisue, in 1996, after they pledged $10 million toward a building endowment. It was added to the National Register of Historic Places in 1980.

The Circle Theater is located in the heart of downtown Indianapolis 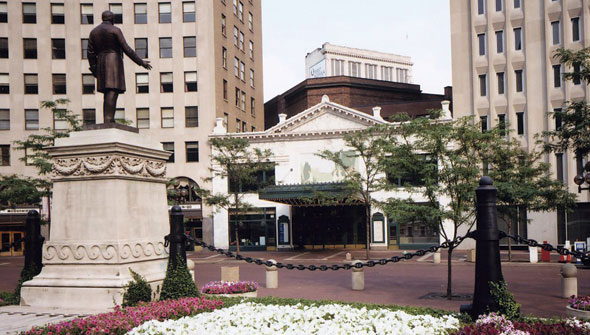 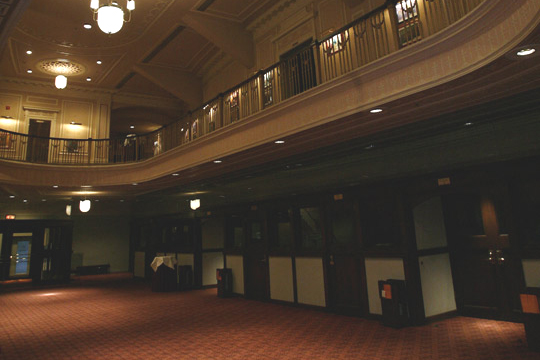 The theatre has hosted both fine arts and events related to modern and popular culture, such as a special recording of Late Night with Jimmy Fallon in 2012 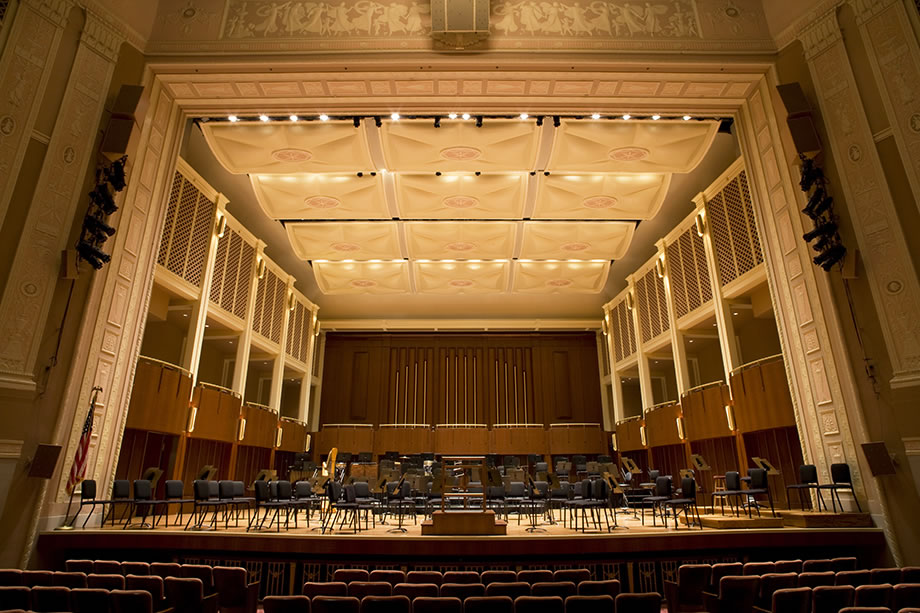 The Hilbert Circle Theatre first opened in 1916 and has managed to survive for over one hundred years in the same location. 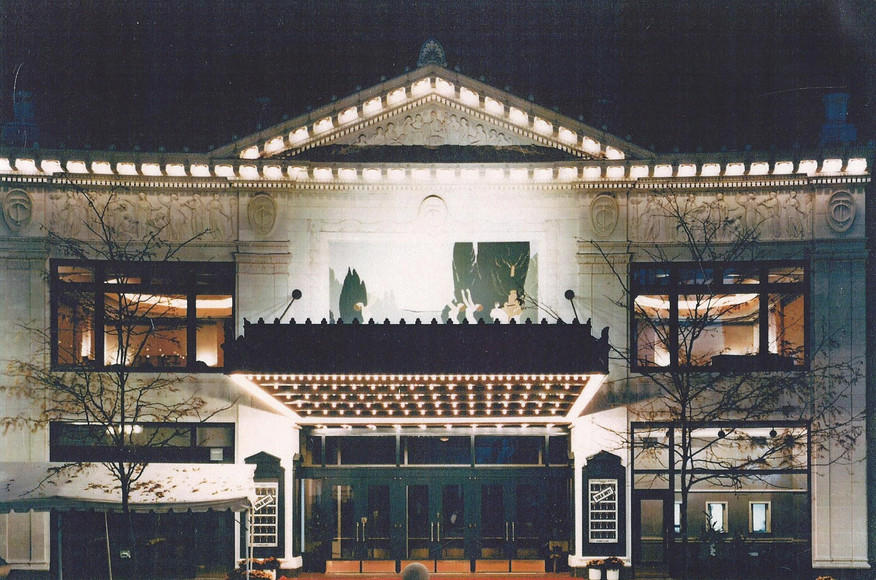 A close-up of the Grecian pastoral mural, painted by H. A. Wheeler, located above the theatre's entrance. 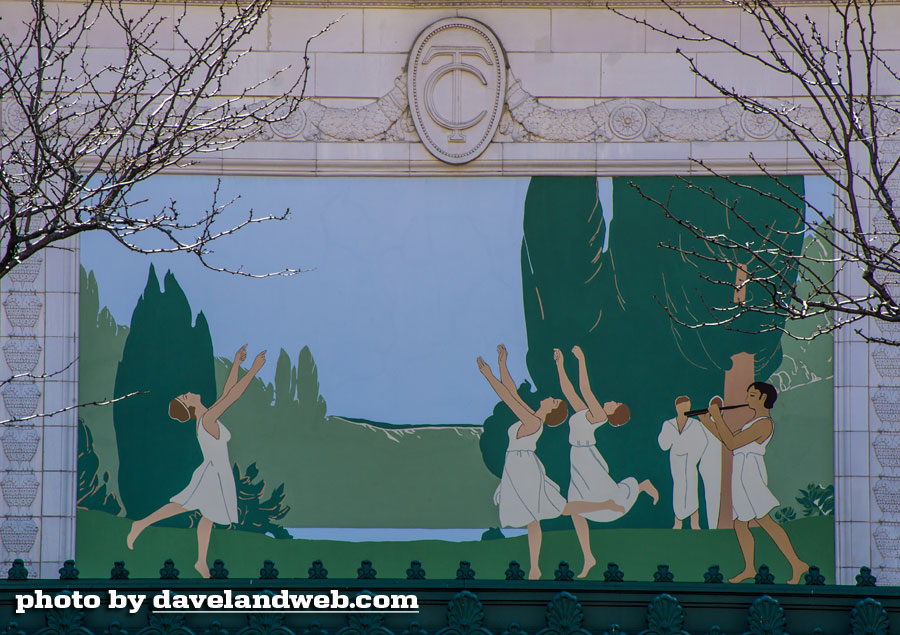 The Hilbert Circle Theatre is home to the Indianapolis Symphony Orchestra, seen here during a 2014 performance. 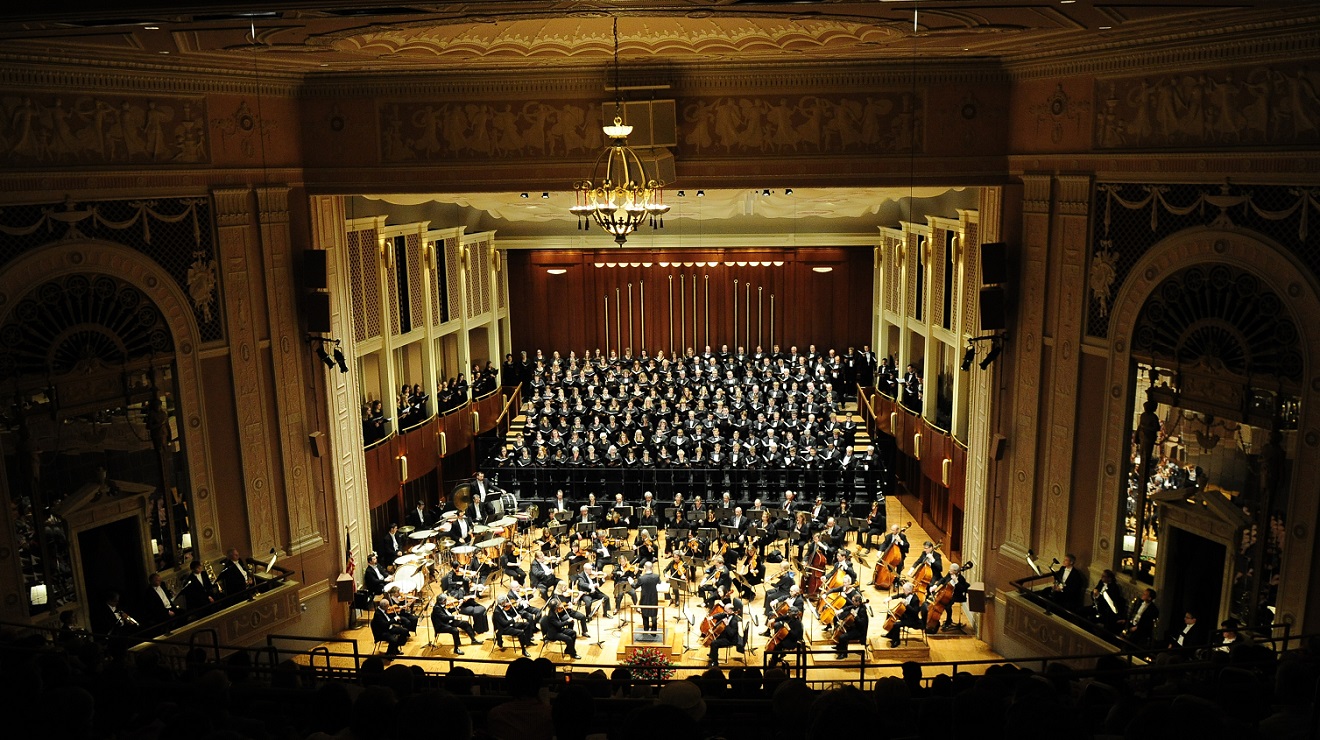 The Hilbert Circle Theatre, circa the early 1930s. The marquee is advertising a "talkie" by Harold Lloyd entitled "Feet First." The huge clock has since been removed. 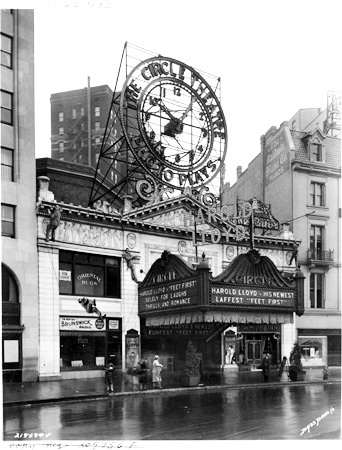 This photo of the Hilbert Circle Theatre's auditorium was taken shortly after it opened in 1916. 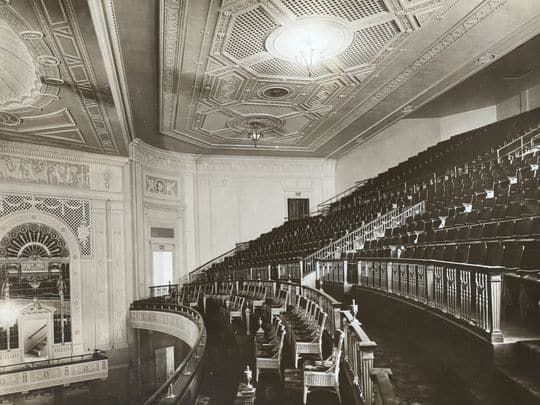 The Circle is thought to be the first theatre to open with the express purpose of showing feature-length moving pictures in the country. However, like many theaters of this period, the Circle also hosted live acts. It replaced a livery stable owned by the Wood Transfer Company, which stood on that spot for much of the 19th century. The Circle opened on August 30, 1916, with orchestral music, a dedication speech by Mayor Joseph Bell, and a showing of the silent movie Home. Other movies shown during its initial year were Wild and Wooly, which starred Douglas Fairbanks, and A Poor Little Rich Girl, with Mary Pickford. In 1928, the Circle played the first movie with sound shown in Indianapolis, The Jazz Singer, with Al Jolson. In the 1940s, big band jazz came to the theater. The Glenn Miller Orchestra and the Paul Whiteman Band made stops on their touring circuits.

The 3,100 seat theater showed movies for sixty-five years. But like almost all movie palaces, it fell on hard times as development patterns and tastes changed. By the 1970s, the Circle Theater had fallen into disrepair. The building was briefly closed in 1981, talk of its demolition spread, and the owner and potential buyers fought to keep it off the National Register of Historic Places, as this would make it's razing that much easier. Fortunately, the Indianapolis Power and Light Company purchased the old theatre and, with tax-credit incentive and a great deal of community support, undertook an extensive $7 million renovation of the theater in the early 1980s. The Indianapolis Symphony Orchestra then made the Circle it's new home. It reopened on October 17, 1984, to rave reviews, and since then, it's hosted numerous shows, symphonies, the weightlifting competition for the 1987 Pan-Am Games, and hosted the Tonight Show with Jimmy Fallon when the Super Bowl came to town in 2012. Tonight Show alumnus Jay Leno also hosted a fundraiser for the theatre in 2016 entitled "Laughing Matters."

The Circle has completed its long, strange trip from an early twentieth-century vaudeville house to a world-class symphonic and live-show performance venue. Its stage was torn out, rebuilt, and expanded during twelve weeks in 2002; all the seats were removed, reconfigured, and replaced in 2013, under a grant from the Lilly Endowment. A 3-manual, 24-rank Wurlitzer Theatre Organ was also installed. The theater now seats 1,781 people for concerts and shows, and today the Indianapolis Symphony Orchestra is the largest performing arts organization in the state and one of only fifteen full-time orchestras nationwide.

The theater celebrated its one-hundredth anniversary in 2016, renewing its support for its resident symphony orchestra but also extending its outreach to the greater Indianapolis community. The hall, lobbies, and Wood Room facility are now available during nonperformance dates for meetings, seminars, receptions, concerts, or for public or private functions.

Please call or visit their website for show times.