Pavilion II is a historical building located on the east side of the Lawn at the University of Virginia. It is situated directly across from Pavilion I at the base of the Rotunda steps. This structure was completed in October of 1822 and is styled after the Ionic order of the Roman Temple of Fortuna Virilis. In 1895, a bucket brigade saved Pavilion II from the fire that gutted the Rotunda. 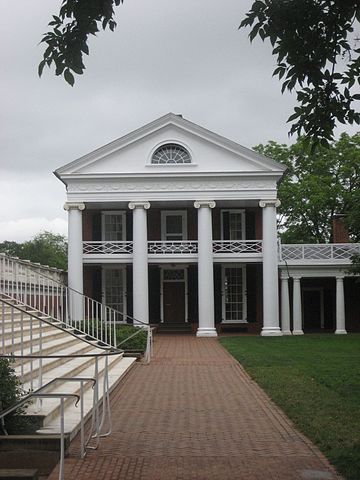 The Lawn of the University of Virginia, USA, with the Rotunda (left) and Pavilions II (middle) and IV (right) 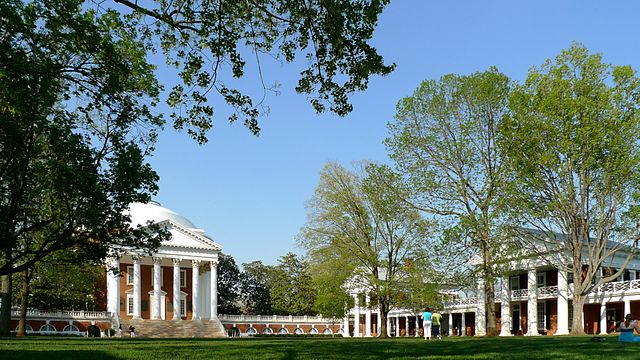 Pavilion II was designed by Jefferson over the course of fifteen days in 1819. He was 76 at the time. The building was largely complete by 1821. Pavilion II draws upon the Ionic order of the Roman Temple of Fortuna Virilis, as depicted in Andrea Palladio’s Four Books of Architecture. The four, two-story Ionic columnns form three bays and are made of plastered brick. The capitals are carved from Italian Carrara marble. Pavilion II is the only pavilion in the Academical Village to feature a small ventry vestibule in front of the entryway.

There are a number of gardens located near U.Va's pavilions. The one at Pavilion II features plants that have both an ornamental and practical purpose. These include a large pecan tree planted by Dean Ivy F. Lewis, blueberry and grape vines, four heirloom varieties of plums, edible Daylilies, and crabapple trees.

Bergstrom, Briana. "A Deeper Look at what is Around You: Pavilion II." BioGrounds at the University of Virginia. Last modified May 13, 2015. http://biogrounds.org/2015/05/13/a-deeper-look-at-what-is-around-you-pavilion-ii/.