This museum first opened to the public in 1955 and features exhibits that showcase the Atlantic and Button Companies-two rival fire companies that later merged into one unified station. The museum also offers exhibits related to historic equipment and firefighting techniques as well as New Bern's Great Fire of 1922. The first fire department in the area was established in 1845, operating as the Atlantic Hook and Ladder Company. After Union soldiers arrived during the Civil War, they founded another one called the New Bern Steam Fire Engine Company No. 1. The company was known as the Atlantics and composed of former Confederates. Meanwhile, former Union soldiers formed a rival company and also bought the town's first steam engine in 1884 called the Button Steam Fire Engine. Members of this company began to be called 'Buttons' and they changed their name to the Button Company. The two departments competed against each other in firefighting ( Eventually, both were moved into the same building and later were joined together to form the New Bern Volunteer Fire Department. 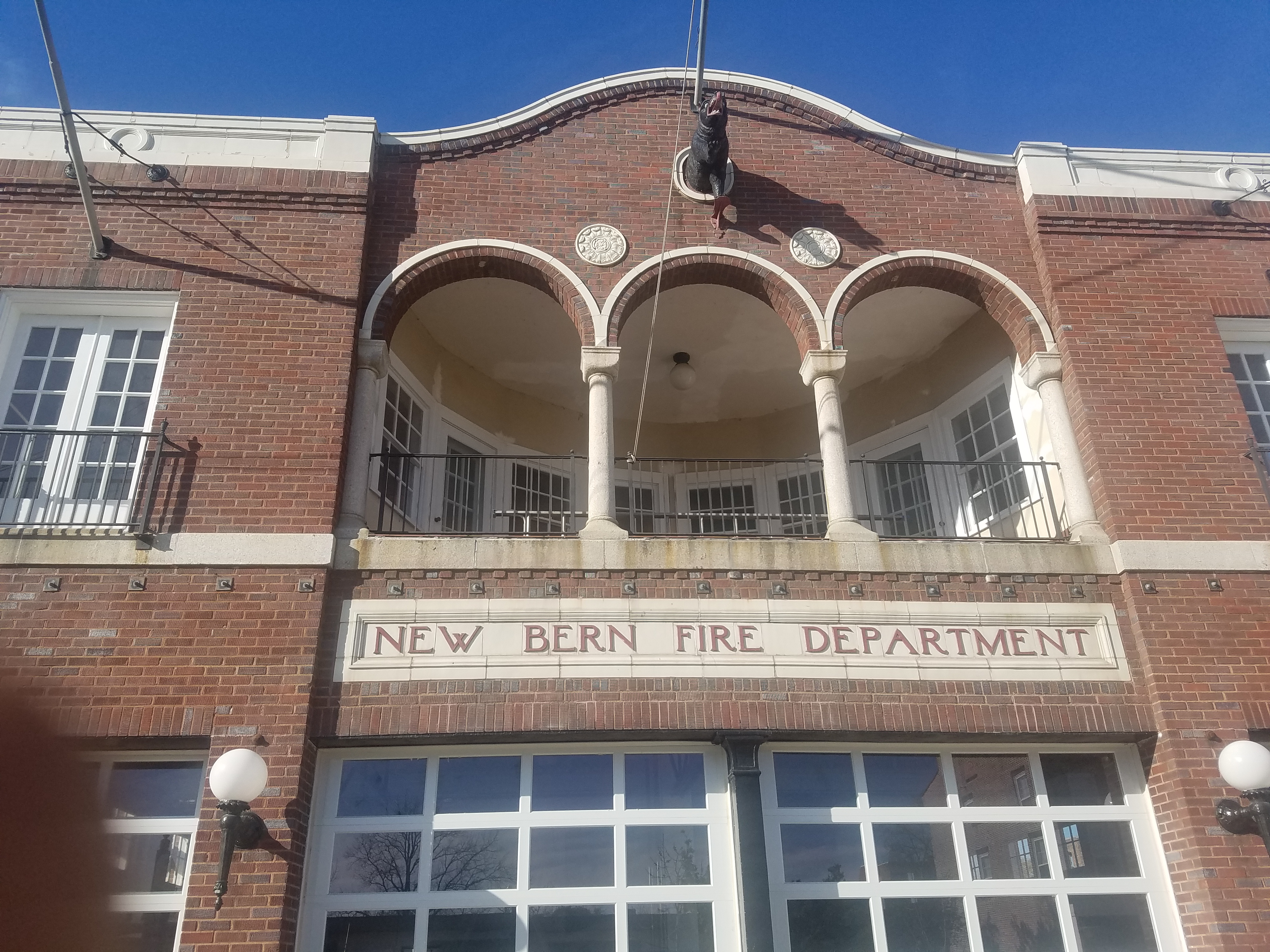 Historic fire engine on display in the museum 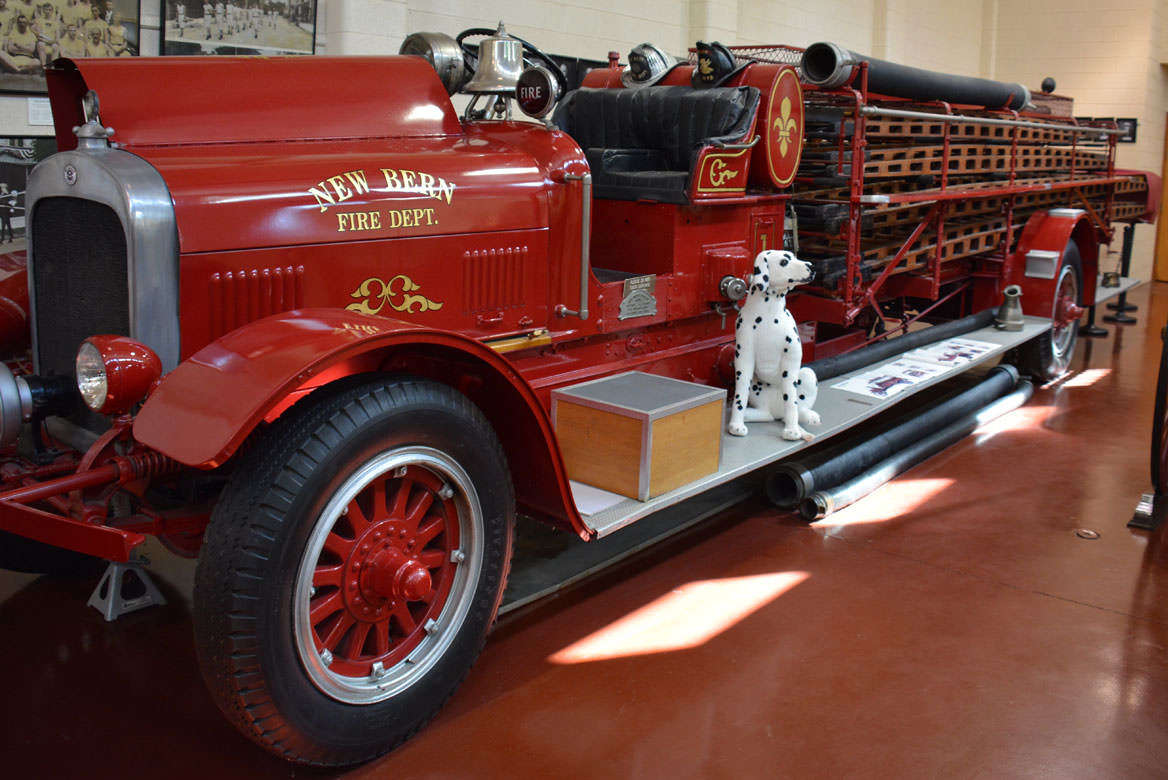 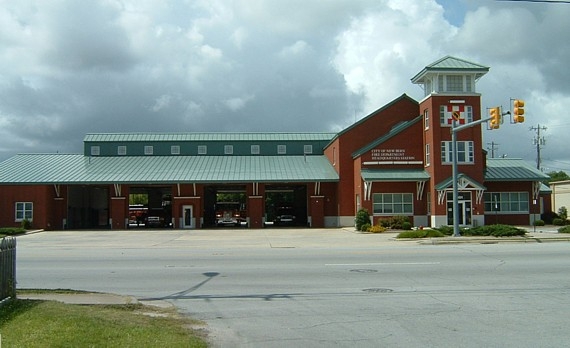 The Atlantic Company is the oldest fire company in NC at the time.  It was organized in May of 1856 and officially incorporated in January of 18471.  Throughout the city, the Atlantic company held many records and accolades.  They were the first to use drop harnesses for horses, won the Real Racing Championship three times,  held the world record for quick steam before the Button Company took it.

The Button Company was a rival organization that was established in January of 1865 and was incorporated in December of the same year1.  The company was formed by Union Troops who remained in New Bern after the Civil War.  This company currently holds 3 world records in horse wagon competitions from the early 1900s.  The fierce competition for records, speed, and efficiency between both companies eventually led to a merger between the two.

In 1928 both the Atlantic and Button Company merged into The New Bern Fire Department1.  They were both housed in a central station on Broads Street; which is now known as the Firemen's Museum.  The Department opened multiple stations across New Bern that spanned National to Elizabeth Avenue.  The Department contains a total of 52 career personnel and 25 volunteers.

A major portion of the museum focuses around the Great Fire of 1922.  The Great Fire is known as the largest urban fire in North Carolina and began on Saturday, December 1st, 1922.  The fire raged for a single day, destroying a large portion of the city. The fire was first reported around 7:30 am and was finally reported as “under control by 5:15 pm."2  The fire was the result of some sawdust getting caught between belts at the local lumber mill.

The Great Fire wasn't just one big fire, but a culmination of a few smaller fires as well.  Another fire that fueled the blaze was a home fire at 30 Kilmarnock Street. The fire there was started by a faulty terra cotta furnace2.  The chimney dust has collected so much that on that day it finally caught fire and exploded into a burst of flames.

The fire ravaged downtown New Bern, and many of its victims felt the shockwave for years to come.  Over the course of the fire, 40 blocks of property, and over 1000 buildings were destroyed, making 3,200 suddenly homeless3. However, all but 20 of those families were Non-white families. During this time, many of the homeless were rescued by “heroic humanitarian efforts".

While many lost their homes, only a few were actually ‘rescued’. Many others were sent to live in a tent city set up close to the town, as directed by a prominent Black leader, by the name of Dr. Fisher4.  It was also believed that, since the sawmill was one of the few primary sources of income for non-whites, the fire might’ve been started by a sabotage, caused by white supremacist groups5.

Much of the information regarding the Great Fire and its possible causes can be traced back to WWI.  The military needed goods for the war, so theysimply switched production from civilian goods to military goods in factories.  This switch in manufacturing and production speeds led to a drop of 6.5 percent in unemployment of citizens6.  The combination of an influx of factories and an overall focus on industry led to many industrial cities, such as the one in downtown New Bern7.  These industrial communities were composed of tenements and also mostly occupied by non-whites and other factory workers7.

Besides the Great Fire, another important part of New Bern's History is the fact that many of its men were drafted to be in the war.  Troops were drafted and mobilized to different places across the world, and military bases were positioned all around the country to capitalize on opportunities like positioning next to water8.  A memorial for these troops from New Bern can be found outside the Courthouse on Broad Street,

6Lozada, Carlos. “The Economics of World War I.” The National Bureau of Economic Security,<http://www.nber.org/digest/jan05/w10580.html.>