The William Heath Davis House is the oldest surviving structure of New Town, now San Diego’s downtown. Today it is the Gaslamp Museum. Davis was born in Hawaii in 1822 and moved to what is now San Fransisco when he was 17. He was an adventurer and became a wilderness guide in the Sacramento Valley. By the 1940s, he started his own shipping business and made a fortune selling supplies and land to people who came to California for the gold rush.

The William Heath Davis House is now the Gaslamp Museum and is the oldest structure in what was New Town San Diego. 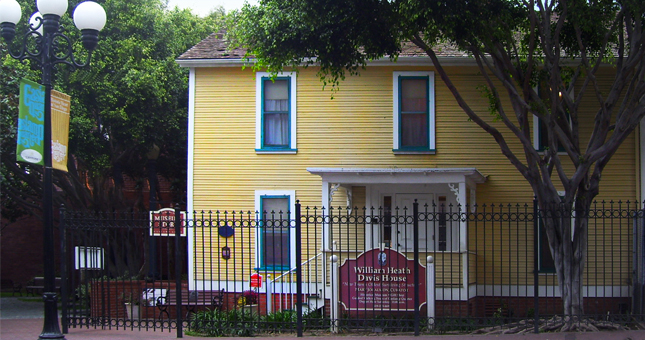 Davis married Maria de Jesus Estudillo, who came from a wealthy San Diego family. This led Davis to become interested in trying to create a new city closer to San Diego Bay. Davis bought pre-fabricated houses and began creating a bayside town called, “New Town.” There was no potable water there and not many people were interested in living there. Shortly after, Davis’ fortune was mostly destroyed in a fire, and he gave up on his idea.

Alonzo Horton came to San Diego in 1867 and picked up where Davis left off. Horton is now considered the Father of Diego. Davis died broke in 1909 and still claimed to be the founder of New San Diego.

Today, there is a street named after him and his home is the oldest remaining in the area now known as the Gaslamp Quarter. Today the home serves as a museum that tells the story of San Diego.