East of the Missouri River along the Big Belt Mountains lies the remains of what use to be a booming gold mine district that was then called Confederate Gulch. Today Confederate Gulch is known as the Canyon Ferry Reservoir at its peak over 10,000 people occupied the district after the discovery of gold there in 1864. The area continued to supply miners with gold all the way up to the 1940s. The most gold found at Confederate Gulch was found at what is today known as Montana Bar located at the foot of Gold Hill. Two acres of land located at this prime site produced more gold per acre than any other mining district in Montana. While one miner reported that one pan had contained over $1,400 it was not uncommon for a single pan to contain over $1,000 from a pan full of Montana Bar gravels The gold mines at Confederate Gulch produced an estimated amount of gold anywhere between $19 and $30 million in gold. Today that gold would be worth of $719 million dollars which would make up to one-third of the gold that is stored at Fort Knox. Most of the miners that had occupied the district were former Confederate soldiers thus where the name came from. The miners tried to build ditches that would sometimes extend for miles so they could get more of the gold out of the mines. This mining method would be their undoing and greed for more gold would eventually end up in the disappearance of all the gold from Confederate Gulch. This mining method ended up washing down the entire hill side which ate up the Gulch floor. As a result the gold ran out, the gold boom ended and the miners simply left. Today there is no trace of either the mining district nor the town of what had once been named Diamond City. 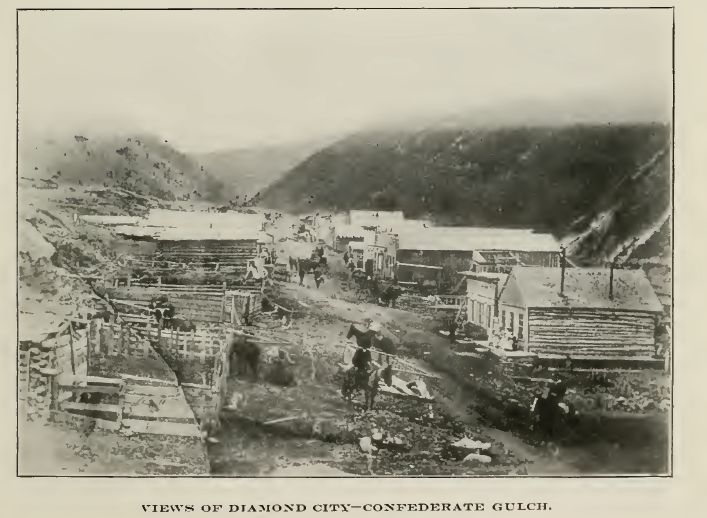