A storied and colorful establishment, the Slippery Noodle Inn has the distinction of being the oldest continuously operated bar in the state of Indiana. Over the course of its long career, the Slippery Noodle Inn has been a haven for runaway slaves, a blues joint, and a watering hole for gangsters. Starting in 1850 as the Tremont House, it later became the Concordia House and then the Germania House. With World War I anti-German sentiment, the name was changed again to Beck's Saloon. A new owner renamed the establishment Moore's Beer Tavern; beer was made in the basement. During Prohibition, the name changed temporarily to Moore's Restaurant. The Yeagy family have owned the bar since 1963 and came up with the name Slippery Noodle Inn. 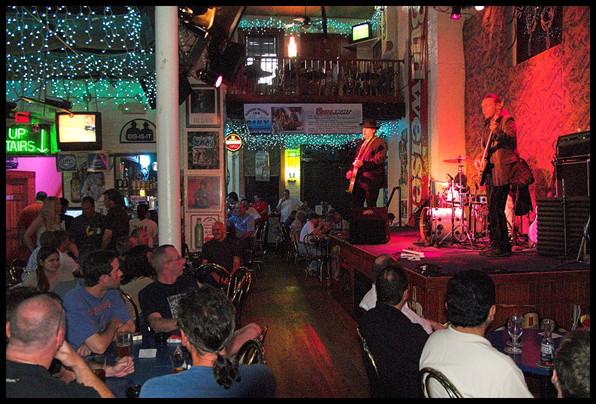 2015 photo of sign outside Slippery Noodle Inn by Skudrafan1 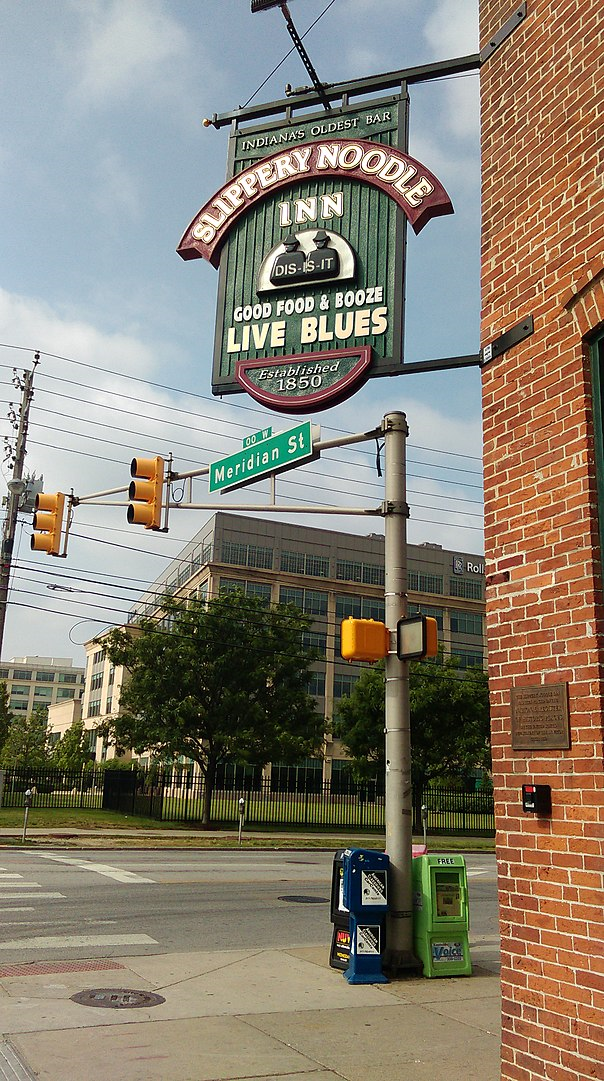 Opened in 1850 as the Tremont House, the bar now known as the Slippery Noodle Inn is an Indianapolis institution and considered one of the country's best blues bars. If walls could talk, most bars would have interesting stories to tell, especially if they've been around for the better part of two centuries. But few bars could rival the tales that the Slippery Noodle could tell.

The bar has gone through numerous incarnations over the course of its long lifespan. A network of underground tunnels made it a way station on the Underground Railroad. For a period prior to Prohibition, it was known as Moore's Beer Tavern; during Prohibition, it became Moore's Restaurant, then changed back to Moore's Beer Tavern once the 23rd Amendment allowed alcohol to flow freely again (Prohibition reputedly did not stop the production of beer in the basement). For a time, it was also a brothel, and some of the upstairs rooms have been decorated in the fashion of houses of ill repute.

Perhaps not surprisingly, given the cast of characters who frequented the bar, there are also rumors of paranormal activity at the Slippery Noodle. One of the Slippery Noodle's more colorful claims to fame is its association with John Dillinger. The local gangster and his cronies were regulars at the bar and used the back wall for target practice. That wall is now part of one of the music rooms, and Dillinger's slugs--embedded in the brick--are still visible (the ones stuck in too far for souvenir hunters to remove).

The building is a contributing resource in the Indianapolis Wholesale District, listed in the National Register of Historic Places in 1982. The district is bounded roughly by Capital Avenue and Maryland, Delaware, and South streets. Most of the historic district is composed of densely-packed, nineteenth-century commercial brick buildings three to four stories tall. A number of the former buildings were replaced with parking lots in the post-World War II era. The name comes from the wholesale businesses clustered here by 1900; the advantage of being located close to the Union Depot rail station became less important in the twentieth century as the trucking industry developed, and the district became more functionally diverse.

The Slippery Noodle is open every day with live blues music nightly starting at 8 o'clock. The back room where the music is played used to be a livery stable. Minors are welcome up to 8 pm.