The Bosworth House looms large in the business area of the Harmar Historic District. The house was built in 1831 for the family of Charles and Frances Gill Kaye Bosworth. It is suspected that the house originally had a clear view of the Muskingum River from side porches before other structures were built. It may be the only home in Marietta to have a false front, meaning that the first and second story verandas on the right side of the house are hidden from the front by a continuation of the brickwork across the width of the house. 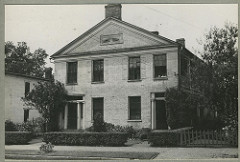 The Maple Street façade is symmetrical with a front door leading to the interior on the left, and the right side door is the entry to the first-floor veranda. The second floor shows four identical windows with the far right one as a part of the upstairs veranda. The triangular structure in the pediment is Greek Revival in style and includes a characteristic fanlight. The interior of the house had double parlors that ran from the front to the back of the house on the right side and opened up to a large side porch. There was a wall between the two parlors that could be pushed up to the second floor and thereby, opening up the two parlors as one for large gatherings. The original mantle was removed and placed in the Fort Street house built for James Whitney, a boat builder in the mid-1800s.  It is not confirmed that Bosworth and Whitney were in business together as river men, but they certainly knew each other.

Charles Bosworth arrived in Marietta with his parents and siblings in 1816. His parents, Salah, a Revolutionary war veteran, and Rebecca Perkins Bosworth married in 1788 and lived in Halifax, Massachusetts with their eleven children. The family joined the fever of traveling west for a new life after some of the children grew up. Two of the children included Sala Bosworth who became a well-known artist and Daniel P. Bosworth who co-owned one of the largest businesses in town. This was the Bosworth and Wells Company on Front Street.

Boat building was a lively trade in Marietta for passengers, freight, and mail since it was so close to the Muskingum Rivers. It was appealing, so Bosworth learned the way of trade as a young man in the local boatyards. In 1828, Charles was 31 years old, already a widower, and a father of two daughters. He corresponded about his business in Marietta with his brother Sala; his brother attended art school in Philadelphia.

He wrote, “Our place is healthy this summer and business is brisk. Whitney and Stone have contracted to build a boat for the company who bought the Oregon. She is to be rising 450 tons burthen which will give employment to our mechanicks through the fall and winter.”  This suggests that he worked with James Whitney, a known boat builder in Harmar.

In 1829, Charles married his second wife, Frances Gill Kaye and initiated plans to build a house in Harmar. The couple had a large family; in total, they had seven children. Life as a captain meant Bosworth would be gone for months as he navigated steamboats on the Ohio and Mississippi Rivers. In 1837, a newspaper story announced that two steamboats constructed were launched on March 25. “These boats were built for and under immediate superintendency of Captain Bosworth and Whitney. The one for the New Orleans, and the other for the St. Louis trade…”

During those years, Bosworth was often on the Ohio and Mississippi Rivers transporting cargo and passengers. Then, for a few days, he would be home. Bosworth would sometimes ask Frances to join him on trips. He grew frustrated with being away from home. River life could be tedious and boring, especially when they were held up for long periods due to low water and slow mail service. Letters sometimes contained acknowledgment of sending money and goods to Frances. Bosworth at one point became worried about finances. He grew weary of the river life that he once loved. Bosworth returned to Marietta supposedly due to one of his daughters, Emma, being ill. After that, Bosworth developed yellow fever during a Mississippi River trip. He died in Memphis on September 26th, 1841. His wife Frances delivered a son on March 4th, 1842, months after Bosworth died. She named the child Charles and later sold the house for $1,667.