This historical marker commemorates the life of Pinckney Benton Stewart Pinchback (1837-1921) the son of a white plantation owner and a black slave mother who went on to become the first African American Lieutenant Governor and Governor. Pinchback was a captain in the Civil War and during the era of Reconstruction he served as a political leader of the newly-formed and bi-racial Republican Party in Louisiana. In addition to serving as Governor, Pinchback was also elected to the US Senate. Owing to the opposition of white politicians in the Senate, however, Pinchback was not allowed to serve his term.

This Historical Marker in memory of Gov Pincback, located on the campus of Southern University. 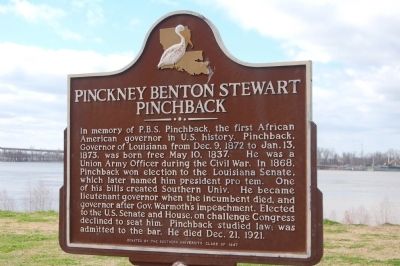 Before entering the field of politics, Pinchback was a part of the Second Louisiana Native Guard, which would later go on to be known as 74th US Colored Infantry, during the Civil War. He quickly rose to the rank of captain, but resigned once it was evident to him that he would not be able to advance higher due to discriminatory promotion policies. Additionally he was not paid the same rate as a white man of the same rank, and he could not stand for that treatment.

Pinchback was an advocate for public education, fighting for it during Louisiana’s 1868 constitutional convention. He also called for racial equality in both education and business.

President Johnson was afraid of being called an accidental president after the death of President Kennedy, but the term accidental governor would be very apt in describing Pinchback. Pinchback was serving as the President Pro-Tempore in the Louisiana state senate when the Lt. Governor Oliver Dunn passed away – Pinchback was elevated to Dunn’s roll, becoming the second African American Lt. Governor in Louisiana after Dunn. A year after Dunn had died, the Governor of Louisiana, Governor Henry C. Warmouth, was impeached.

Pinchback only served as Governor of Louisiana for a very short time, from December 9th 1872 to January 13th 1873. Just 36 days. But while his term was very brief it was significant because he was the only black governor during Reconstruction, and the only one for over one

hundred years. The second black governor, the first to be elected, wouldn’t come until 1989, with the election of Douglas Wilders (D) in Virginia, 117 years later.

Pinchback aimed for both the House and the Senate after his brief term as governor and was denied both. Racial tensions were high in Louisiana. And he had the Ku Klux Klan and the former Governor Warmouth working against him. While he had won, he was not certified by the state. It would take years for the Senate to decide what to do with him, during which time the Civil Rights Act of 1875 passed and a black man named Blanche Bruce was sworn into the Senate.

The Senate decided that Pinchback would not join their ranks in 1876, three years after the state had voted to send him there.

Pinchback was a man before his time, an advocate for Civil Rights, public education, and political equality. He was a dynamic figure in politics, and even if his work went unappreciated at the time it has left a great legacy in its mark on history.

Gates, H. Jr. "The Black Governor Who Was Almost A Senator" PBS.org