The Philips-Ronald House is a historic home within the original sixteen squares of Blacksburg. It is also known as the Carrington Lybrook House and Five Chimneys House. Built between 1851 and 1852, the one-story brick dwelling is distinguished by the multiple eponymous chimneys. A contributing frame garage dating to the 1930s is also on the property, which is listed on both the Virginia Landmarks Registry and the National Register of Historic Places. 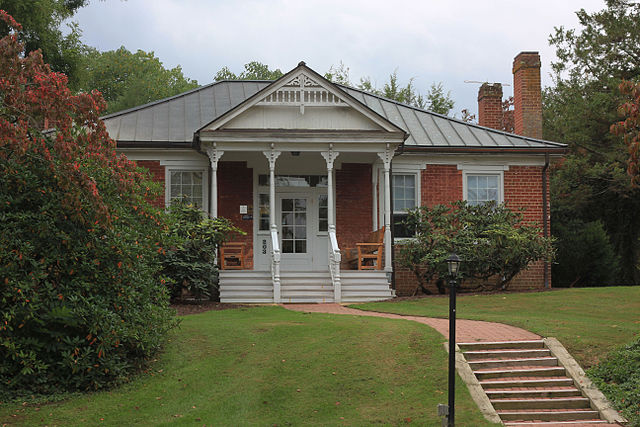 The Phillips-Ronald House is notable as it is one of only five one-story houses of the double-pile center-passage form built during the mid-nineteenth century. The house was added to the NHRP and designated a VLR in 1989 owing to its unique design. It has a hipped roof and, as the name suggests, five chimneys. The four major chimneys are located along the side walls. Additionally, it features a three-bay central entrance porch.

The property owned by John R. Philips, a merchant and physician, who purchased the land from Alexander Black. Though no deed of the purchase exists, there is a record of a lawsuit over Philips' failure to pay Black $1,000 for the eighteen-acre tract of land. Philips practiced medicine in Blacksburg and owned a dry goods store in 1849 on Water Street. He also owned a medical library and directed both the Blacksburg Savings Bank and Olin Preston Institute (now Virginia Tech).

On April 14, 1853, Philips sold one and a half acres of land to brothers Charles A. Ronald and Nicholas M. Ronald for $1,000. Owing to a serious business failure, Philips left the Blacksburg area by 1860. Nicholas Ronald was a merchant and banker. His brother was the town's only lawyer. The home appears to have been used by Sarah Kent, the widowed sister of the Ronald brothers. She lived in the home until 1889. In 1891, the house was transferred from Charles Ronald to O. C. Peters to pay off a debt—it is thought the porch was added at this time.

Following a succession of owners, the horticulturist A. G. Smith acquired the home in 1936. The contributing structure, a frame garage, was added in the 1930s during Smith's residence here. He lived in the house until his death in 1986. Smith had sold the home with life interest several years prior to a buyer who resold the home to the Town of Blacksburg in 1986. The front lawn underwent an extensive landscaping effort in the 1930s which revealed significant archaeological deposits. These included features pertaining to the mid-nineteenth century construction and occupation of the house, a brick and limestone walkway, ceramic artifacts, and items related to food preparation.