Built c. 1765, the Amos Baldwin House is an important example of colonial architecture. It is a post-and-beam building with a gambrel roof, representative of 18th-century residential architecture in New England. The property also includes two early 20th-century outbuildings. Its best-known owner is Amos Baldwin, who purchased the house in 1811. He served in the Connecticut Constitutional Convention and operated a number of businesses in Norfolk. Several decades later, under the ownership of Abel Pendleton, the property became a dairy farm. During the 1940s, the house had a brief stint as the Norfolk School, a small private school that prepared male students aged 14 to 20 for both college academics and agricultural careers. 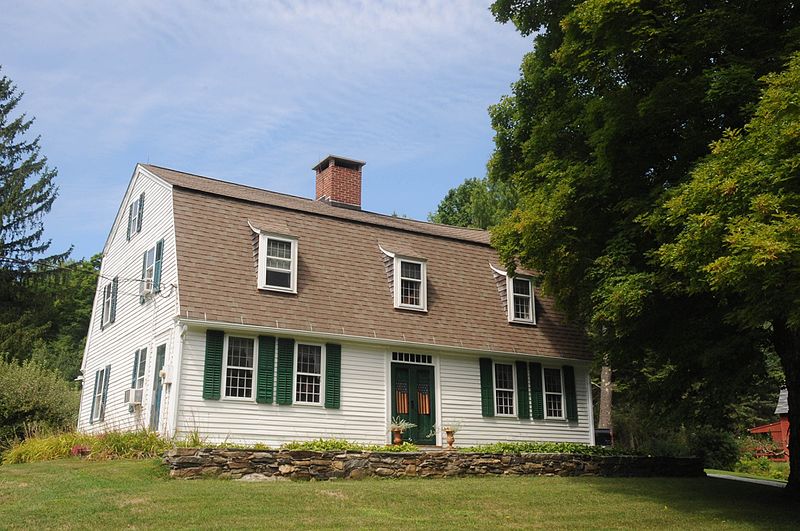 New England Colonial Architecture
The Amos Baldwin House retains much of its original appearance. It has a dry-laid stone foundation, center chimney, and clapboard siding. It remained without modern conveniences until sometime after 1928, when its new owners Richard and Aroline Leach undertook renovations. Nonetheless, as Steven Bedford writes, it remains a "key local example of mid-eighteenth century residential architecture and building methods in the Town of Norfolk." The Baldwin house is among seven surviving 18-century houses in Norfolk.

Farming in Connecticut & the Rise of Dairy Farms
Though the house is now named for Amos Baldwin, it has had numerous owners over the years, most of whom were farmers. The property was likely a subsistence farm, later turned into a dairy farm. Amos Baldwin acquired the house in 1811 and is the property's best-known owner. He was a member of the Connecticut Constitutional Convention, owned ~200 acres of land surrounding the house, and ran a chestnut shingle mill, a sawmill, and a cheesebox factory.

The Pendleton family owned the house and property from the mid-19th century until 1928. Ethan Pendleton owned 1000 acres of land in the Norfolk area, a sawmill, and a shop that manufactured and sold Black oak clock plates. Abel Pendleton, who owned the house in 1870, had a 240-acre farm with 18 dairy cows. The property's conversion to dairy farming reflects broader trends in Connecticut at the time. Milk from Litchfield County dairy famrs could be sold to the Borden Milk Factory, which opened in Canaan, Connecticut in 1857. Moreover, the establishment of the Housatonic and Connecticut Western Railroads meant that milk could also be shipped to New York.

The Norfolk School
During the early 1940s, the house served as a small private school, the Norfolk School, founded by Richard Leach (owner of the house), Lincoln Foster, Walter Campbell, and Francis Shepardson. The school provided young men an education that prepared them for both college and farm work. As Bedford explains, the Norfolk School's educational curriculum was developed in the context of New Deal era education: "Due to high unemployment rates in the country, education goals during the New Deal era (1932-1945) included a focus on productive employment and the promotion of self-sufficiency." Students learned history, English, Latin, modern languages, biology, and algebra, in addition to participating in activities outdoors: construction, crop cultivation, horseback riding, and so on.

Leach converted rooms in the house for use as student accommodation, classrooms, and a dining room. He also updated the house to include a modern kitchen. The barn housed a workshop and laboratory space. In 1943, however, most of its teachers were drafted to serve in WWII, marking the end of the school.