Prior to the early 1920s, this area was known as Battery Porter Hill owing to its high elevation and use as a Confederate gun battery during the Civil War. The hill was home to a grand Victorian hotel that was completed in 1886. In the 1920s, developers leveled the ten hilly acres that composed the Battery Porter Hill neighborhood in order to expand the downtown area. At the center of the development project was the construction of an even grander hotel that was in operation from 1924 to 1972. And so while the hill met its end in 1924, the neighborhood witnessed a new beginning that paralleled the growth of Asheville. The original Battery Park Hotel, constructed in 1886, was significant for the size of the city at the time of its construction. After four decades of growth, however, developers saw an opportunity to build a modern high-rise hotel. Edwin W. Grove purchased the property and began his plan to build an urban hotel with Southern charm. After leveling the Battery Porter Hill neighborhood, he rebuilt the Battery Park Hotel using the latest building technologies and amenities. The hotel was the social center of Asheville for many years, but its fortunes declined with the rise of national hotel chains. In 1972, the Battery Park Hotel closed its doors. The city's housing authority purchased the building in the 1980s and converted the former hotel into an apartment complex for seniors. 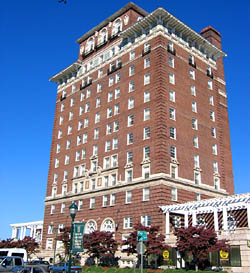 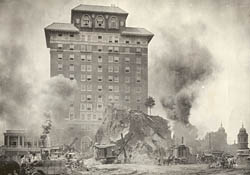 The original hotel in a postcard from the early 1900s. 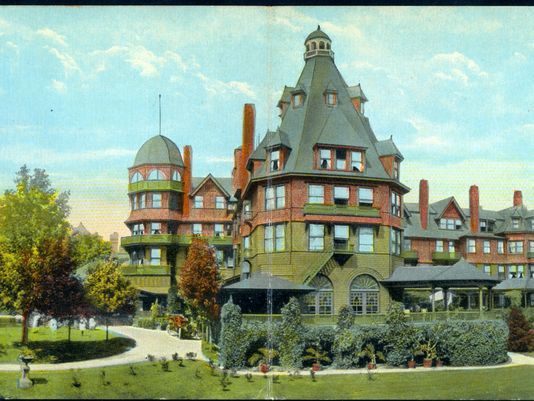 The original hotel was conceived by Colonel Frank Coxe, who opened the doors of the original Battery Park Hotel on July 12, 1886. Within its first decade, the hotel was known as "one of the world's social centers."1 George Vanderbilt numbered among the esteemed guests who roamed the legendary hotel's halls.

By the 1920s, Asheville was in the throws of a flourishing tourism economy and major development period that even dwarfed the turn-of-the-century era success. In this context, however, the old Battery Park Hotel was anachronistic. While the massive wooden building once representing the epitome of grandeur, the decades of technological and cultural development between its construction in 1886 and the booming economies of the 1920s unforgivingly marked the old hotel as a nineteenth-century artifact blotting an otherwise vibrant portrait of progress.

When Edwin Grove purchased the property from Coxe, he attempted to incorporate the aging yet undeniably impressive hotel into his plans to expand into a hospitality complex, but those efforts collapsed during Grove's massive hill excavation. The old hotel emulated Queen Anne style architecture, and the decision to demolish it was met with heated debate by Asheville's citizens, but Edwin W. Grove's new Battery Park Hotel promised to feature revival styles in vogue during the 1920s.

W. L. Stoddard designed the imposing 14-story building, facing its concrete substructure with brick and limestone, complete with a "Mission Revival style roof."2 Indeed, the hotel was representative of larger trends during the 1920s that often wedded Neoclassical and Spanish designs in the accelerated construction of hotels across the country. Just as its predecessor, the new hotel made sure to incorporate the latest trends and luxury appointments, including rooftop dining which, considering the hotel's impressive height, boasted incredible views of Asheville's mountainous skyline. Similar to many other grand downtown hotels, this hotel saw a decline in its business in the 1960s and 1970s. After closing in 1972, the hotel was converted into apartments.