Rectory and Church of the Immaculate Conception

The Immaculate Conception Church was dedicated in 1865, and Norfolk Parish was established in 1889 under the pastoral leadership of Father Patrick Keating. The church and rectory underwent significant alterations by architect Alfredo Taylor in 1924.

The exterior walls feature rubble stone (lower half) and stucco (upper half). (source: Archdiocese of Hartford) 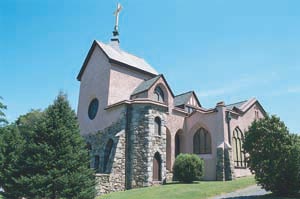 In 1924, noted architect Alfredo Guido Taylor redesigned the church into its present appearance. It had previously been Greek Revival Style. Taylor enlarged the church, making room for 320 people. He also added a layer of rubble stone (at the base of the structure) and a layer of stucco (higher up on the exterior of the walls). The rectory also received a layer of stucco to march the church. As David Ransom noted in his summary for the Connecticut Historical Commission, "The result is difficult to categorize...The character of the church has been changed to something vaguely Spanish Colonial Revival, but without the elaborate ornamentation associated with churches of that style."