The Jewish community in Blacksburg began to develop during the late 1960s owing to the growth of the university. By 1976, the small community had organized an informal, non-denominal congregation. They soon began searching for a building in which to offer services, ideally one which was within walking distance of Virginia Tech and located near the center of Blacksburg. The structure at the intersection of Roanoke and Church Street was constructed in 1903 as a Baptist Church. It was purchased and renovated by Blacksburg's Jewish families in 1979. Today, it houses the Blacksburg Jewish Community Center (BJCC), a lay-led unaffiliated synagogue that offers a wide range of Jewish activities.

(2007) The Jewish Community Center at the corner of Roanoke and Church Street. 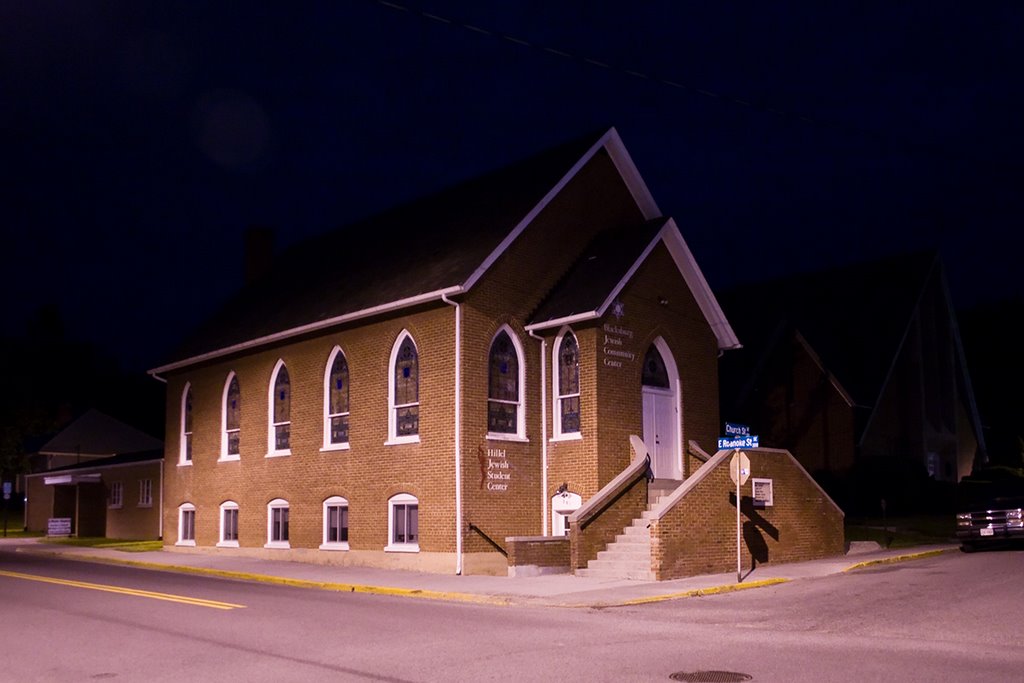 Blacksburg is known as the home of Virginia Polytechnic and State University (Virginia Tech). Established in 1872, VT began as a land grant military institute but soon became a traditional four-year college. In the mid-1960s, President T. Marshall Hahn led an effort to transform the college into a large research university. During this process, an influx of students and faculty members moved to Blacksburg, many of whom were Jewish academics.

The new arrivals largely came from northern cities with major Jewish communities. The small town of Blacksburg, however, had no organized Jewish life. Early arrivals would drive 40 miles to Roanoke for services and religious school. Consequently, a small group of women (many of them married to faculty members at VT or Radford College) began monthly meetings in 1973 in Elaine Kalison's home. During these meetings, they coordinated the purchase of kosher meat from Charlotte, North Carolina, spoke about the challenges of raising Jewish children in Blacksburg, and discussed how to spread awareness about Judaism in local public schools. The group soon became known as the Jewish Women's Group.

During Chanukah of 1973, the Jewish Woman's Group began to organize community activities, such as Marcia Shumsky's "Chanukah Sale," which provided Jewish families with holiday necessities not otherwise available locally. The first annual Chanukah potluck dinner had more than 75 attendees and integrated many families into the community. The following year saw the organization of a Sunday school, with several Virginia Tech students serving as educators. Marvin Blecher, Hillel Advisor at Virgina Tech, coordinated the recruitment effort. The Sunday school met in the Squires Student Center on the university's campus.

By the mid-1970s, the growth of Blacksburg's Jewish community prompted the development of community-wide worship services, an effort headed by Harvey Rosenberg, David Kaplain, Marvin Blecher, and Larry Perlmuter. During this time, there were heated debates over issues such as the role of women during religious services. The relatively small size of the non-denominational congregation, however, meant that Jewish persons from a variety of traditions had to work together to resolve their differences.

The congregation's membership increased to about 20 families in 1979, prompting the decision to purchase a building for dedicated use. The financial support of a group of families called the Maccabee Investment Group made possible the purchase of the old Blacksburg Christian Church and Odd Fellows Lodge. The building, originally constructed as a Baptist church, was within walking distance of Virginia Tech. Additionally, it was situated in a central location in town, meaning it would promote the visibility of Blacksburg's Jewish community. The congregation worked to clean and restore the historic structure to make transform it into a synagogue.

Known as the Blacksburg Jewish Community Center, the presence of the new building was an important step toward the integration of the Jewish residents into the larger Blacksburg community. This lay-led, egalitarian, unaffiliated synagogue serves families living in Blacksburg and New River Valley, including the nearby towns of Christiansburg, Radford, and Floyd. The BJCC offers a wide range of Jewish activities, from Shabbat services to monthly potluck lunches (continuing the potluck tradition established in the 70s).