Originally known as the Merchants National Bank Building, the 17-story Barnes and Thornburg Building was completed in two phases, the first in 1908-1909 and the second in 1912. It is located at what many refer to as Indianapolis’ most important intersection at the corner of Meridian and Washington Streets, just south of the city’s center at Monument Circle. It was designed by the Chicago architectural firm of Burnham and Root and is an excellent example of the Chicago School of design. It was added to the National Register of Historic Places in 1982 and is also part of the larger Monument Circle Historic District.

The former Merchants National Bank Building was designed to represent a Corinthian column with the base and crown separate from the red brick shaft. 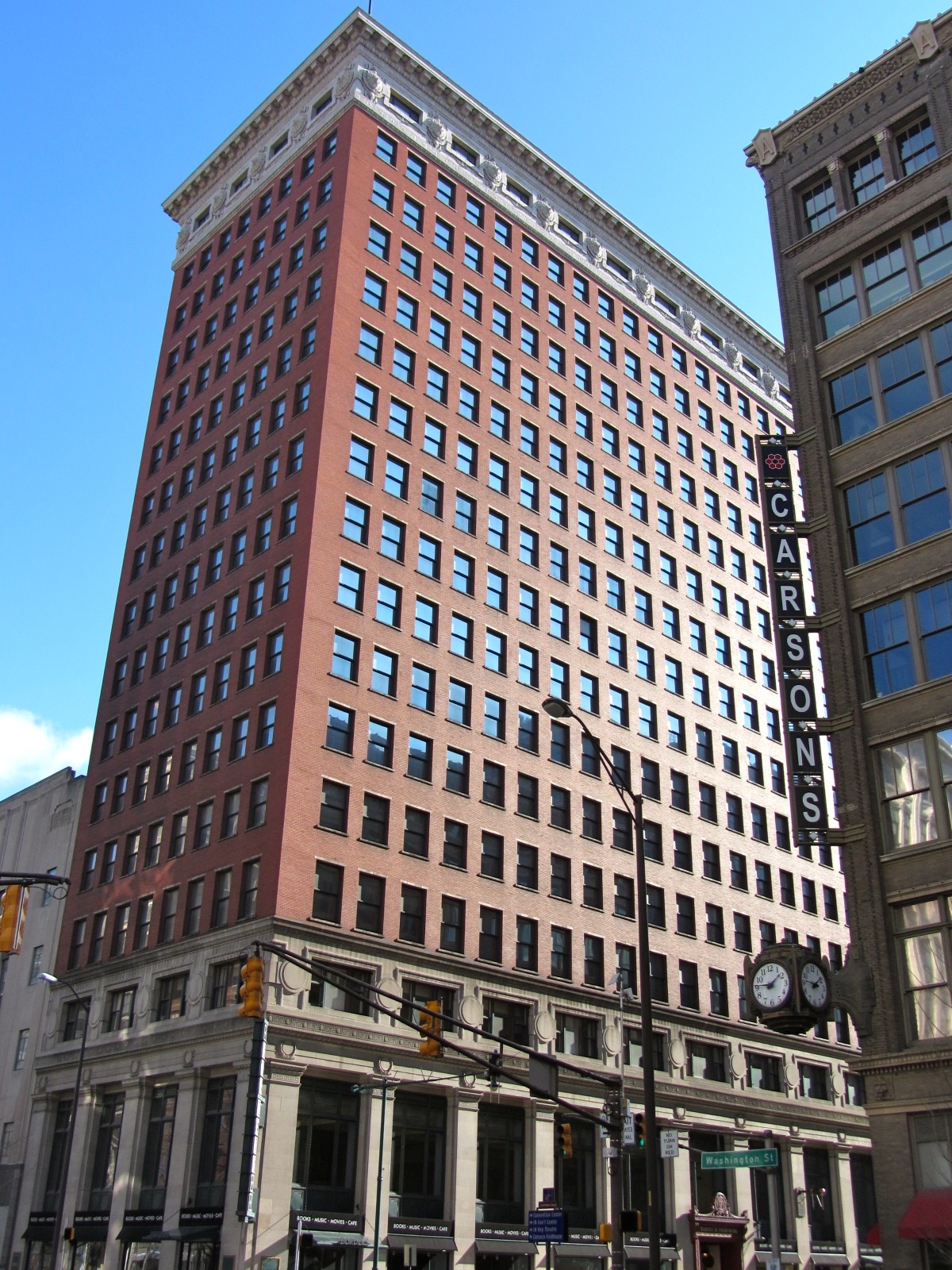 A close-up of the building's crown which features ornate terra cotta moldings. 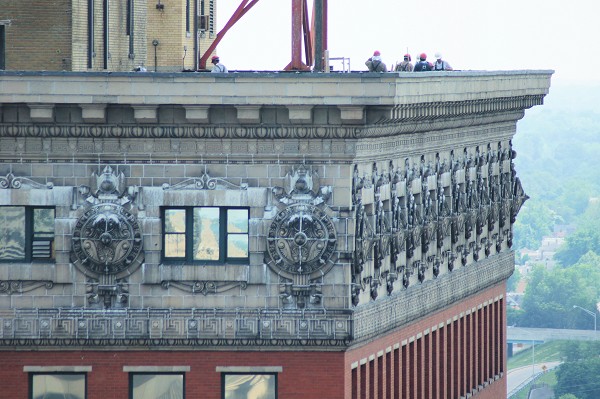 A 1916 penny post card that features the Merchants Bank Building and proclaimed it as the "highest building in Indianapolis." 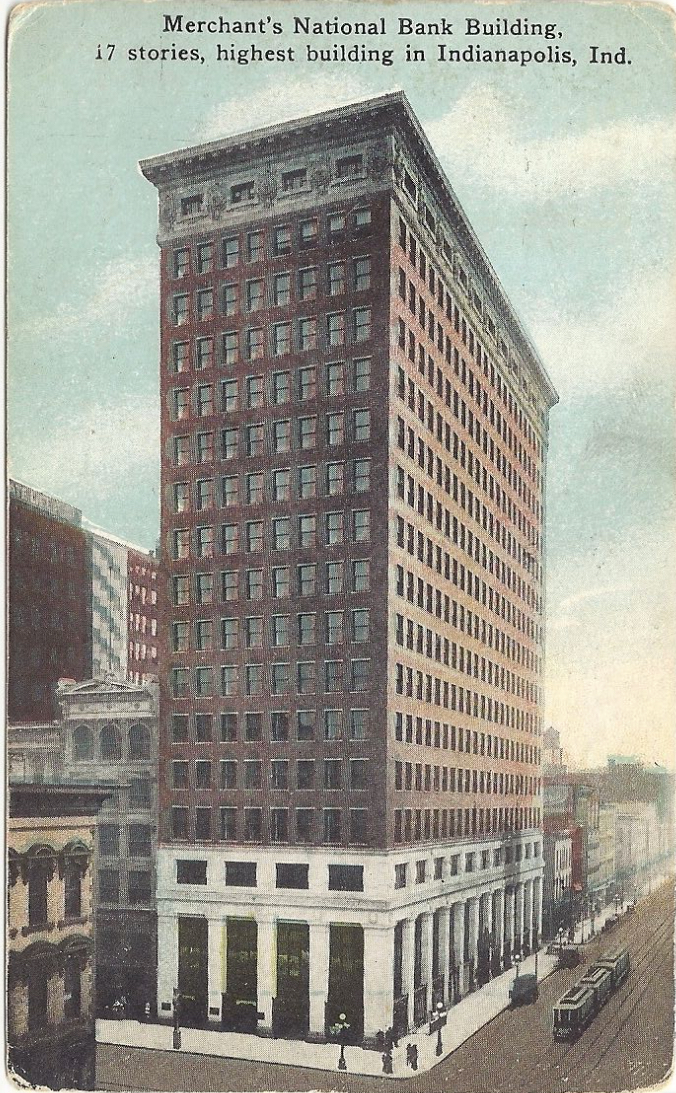 The building's main lobby was restored to its original grandeur in 2013. 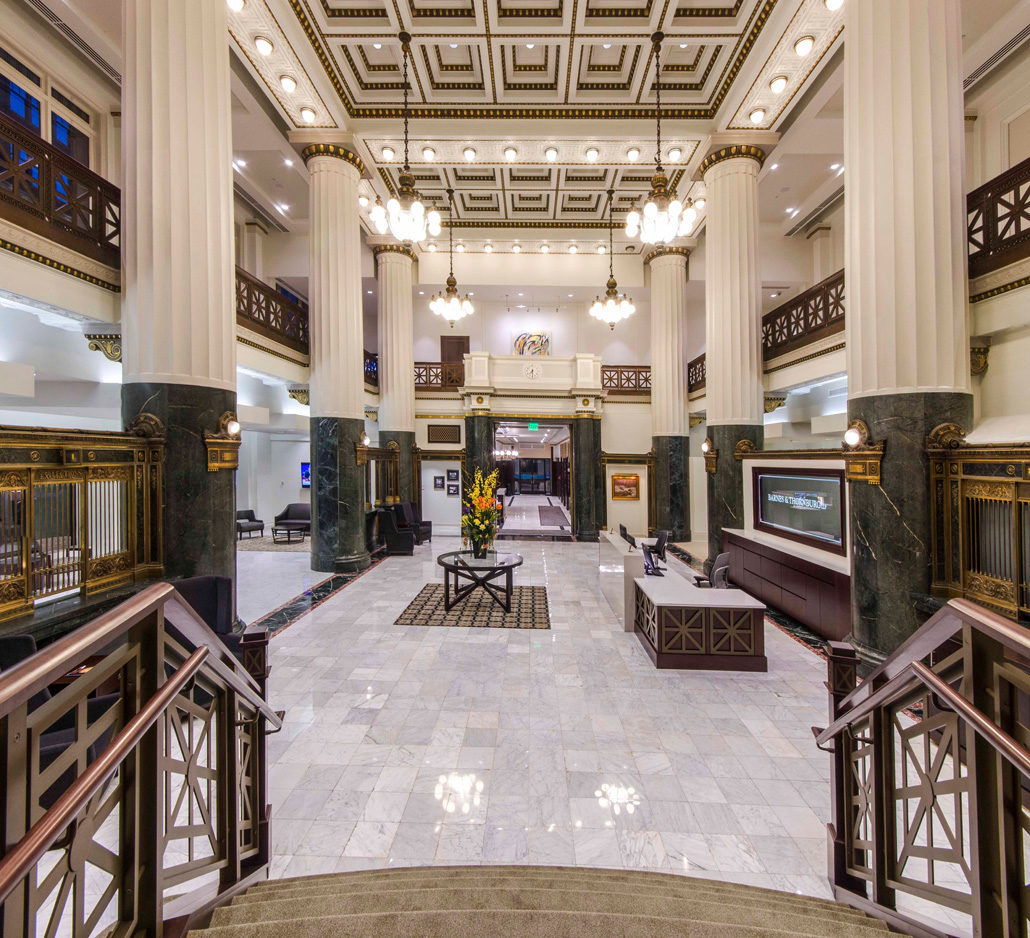 The three, green marble teller windows on the left and between the columns are all that remain of the original. 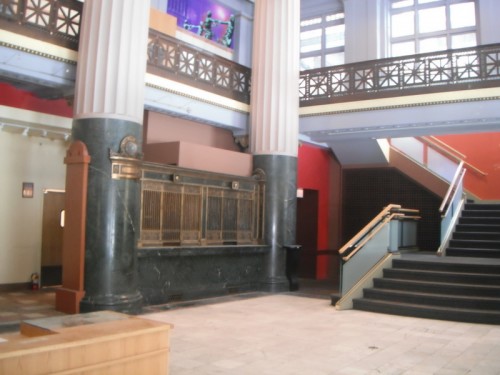 The board of the Merchant’s National Bank, which was founded in 1865, decided, in 1905, to build a new building in Indianapolis to serve as their headquarters.  They then hired Daniel Burnham, the head of a Chicago architectural firm to design their new home.  Burnham had studied under Louis Sullivan, the founder of what would come to be known as the Chicago School of architectural design.  It is understandable, then, that Burnham would design a building that fell within the Chicago School’s purview.  He designed the building to represent a Corinthian columnn, with a tripartite formula of base, shaft and capital or crown.  To that end, the building’s first three floors are faced with Indiana limestone and feature twelve Doric-style pilasters.  The building’s next thirteen floors are comprised of red brick with simple, classic lines.  Finally, the building is topped with a crown of classical terra cotta moldings.

Construction on the building’s lower floors began in 1908 and was completed the next year, while construction on the rest of the building was delayed as the lease on a nearby building that had to be demolished did not expire until 1912.  When completed, it was Indianapolis’ tallest building, at just under 250-feet, until the City-County Building was completed in 1962.  The Merchants Bank lobby occupied the building's first two floors and was built primarily with white and green marble with bronze accents.

Some of the building’s first tenants included the New York Central, Louisville and Nashville, and Illinois Central Railroads, Hook’s Drugs, and various insurance and law firms.  The city’s first television station, WFBM also set up shop in the building in 1948 and placed a tall receiving tower atop the building which has since been removed.  The United Mine Workers of America, were, at one time, headquartered within the building as was Eli Lilly, Stokley-Van Camp and the L. S. Ayers and Company Department Store.

Today, the building’s top floors are occupied by the law offices of Barnes and Thornburg, LLP, Indianapolis’ largest law firm.  The firm also now owns the building.  As for the ornate ground floor, it had been home to a branch of Borders Books until 2011 and is now home to another bank.  The building’s lobby was renovated in 2013 and its original color scheme has been restored.  New reception and security desks were also added and the remaining original teller counters were restored.