The Angel Orensanz Foundation is housed in the fourth oldest synagogue still standing in the country. 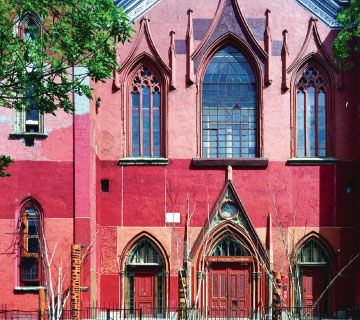 View inside the center.

The Angel Orensanz Gallery is a contemporary fine art gallery located in New York's Lower East Side. Angel Orensanz Angel Orensanz is a Spanish sculptor and painter. He has lived in New York City since 1986. During one of his first art premieres in NYC, he discovered an abandoned and rundown synagogue. The 1849 Neo-Gothic Jewish Synagogue located on 172 Norfolk Street in the heart of the Lower East Side is a replica of the Sistine Chapel in Rome and the temple of Solomon.

In the mid-19th century, the Lower East Side was home to the German Jewish immigrants immediately after the failure of the socialist revolution of 1848. The newly formed Congregation, Ansche Chesed, hired the German architect Alexander Saeltzer to build a new synagogue. At the time, it was the largest synagogue in the United States holding up to 1,500 worshipers. For a time, the synagogue thrived, but by 1974, the Slonim community had dispersed. The synagogue was abandoned and suffered vandalism.

In 1978, Orensanz renovated this elaborate landmark and created his own foundation that today still carries his name. The Angel Orensanz Foundation is home to displays and presentations for the visual and performing arts. Today, the Foundation acts as both Angel Orensanz’s studio and as a center for the arts, serving as a magnificent venue for concerts, weddings, lectures, and community events. The Foundation provides an intimate space to experience Angel’s work and an artistic and cultural resource for artists, writers, thinkers, and members of the surrounding community.