This exhibit utilizes artifacts and photographs to interpret the issues President Truman faced in his first four months in office, a period that was defined by the end of World War II. 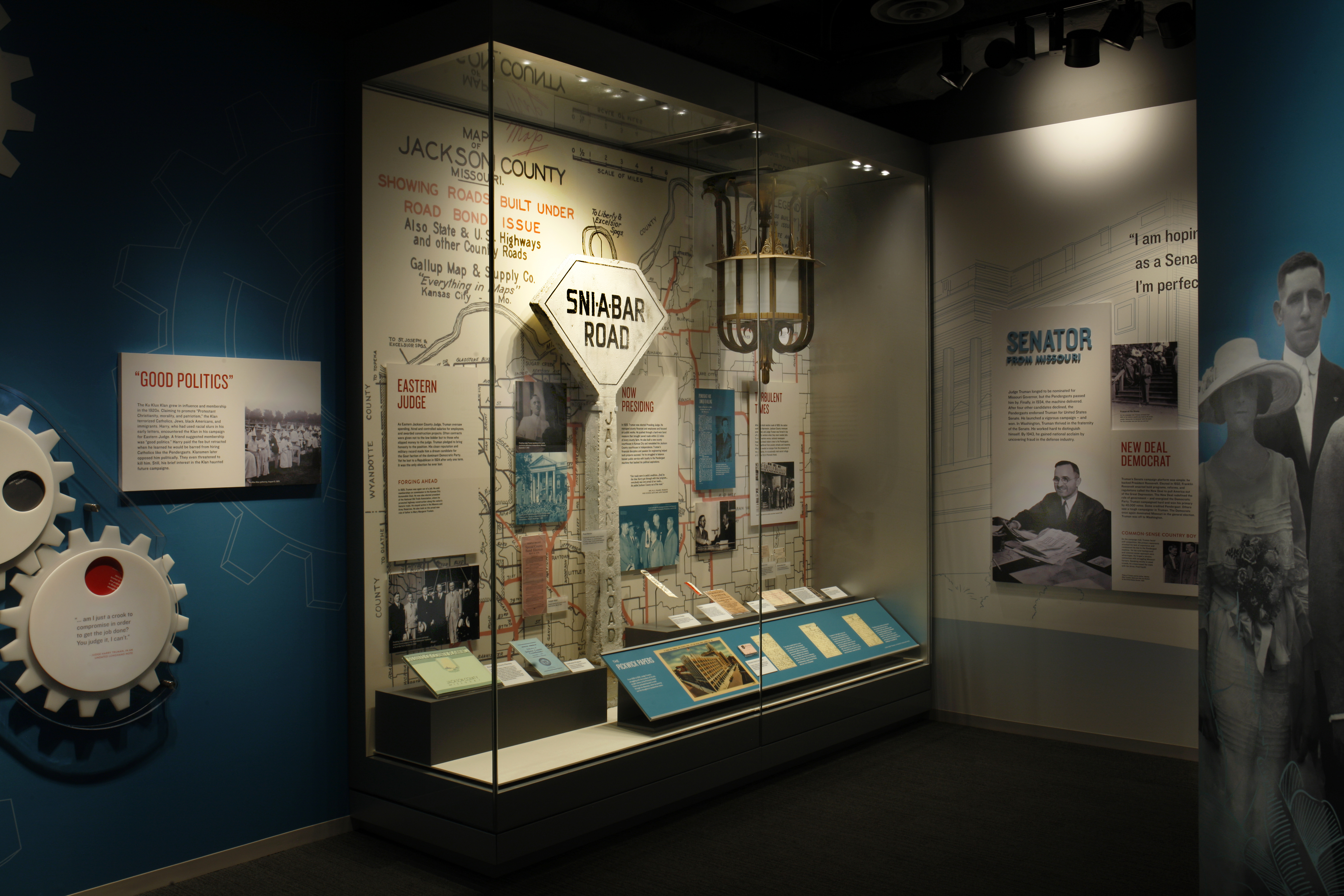 April 12, 1945 started as a typical day, but before the sun had set, Truman’s life would be forever changed, as would the course of history. Truman had dropped Margaret off at George Washington University, gone to work, dictated letters to his sister-in-law and James Pendergast, and planned a poker game. After the Senator adjourned, he was standing in the office of House Speaker Sam Rayburn, having a drink, when the telephone rang. Franklin Roosevelt had died in Warm Springs while having his portrait painted. Truman must come to the White House at once. He would be sworn in as President by day’s end.

President Roosevelt had shared little with his vice president. Now Truman faced some of the most momentous decisions ever put before an American president. On the day he was sworn in, President Truman was shaken and uncertain. He had to learn on the job. By August, he was more confident and resolute. The decisions he made in these chaotic four months ended the Second World War and foreshadowed the immense new challenges of the post-war world. At the same time, Truman and his family struggled to adjust to their new lives in the White House and in the spotlight

In 1939, physicists Albert Einstein and Leo Szilard wrote President Roosevelt, warning that the Nazis were developing a superbomb. Armed with this knowledge, the U.S. embarked on a massive program to build an atomic bomb before the Germans. Six years and two billion dollars later, “the Gadget” would soon be ready to test.

On the day President Truman announced Victory in Europe he celebrated his 61st birthday. Millions around the world celebrated V-E Day. Yet triumph in Europe was tempered by ongoing grief and suffering. Truman proclaimed the United States ready to “turn the greatest war machine in the history of the world loose on the Japanese.”

Truman’s first decision as president was to proceed with the United Nations Conference in San Francisco. The United Nations would be dedicated to promoting peaceful international cooperation and preventing another global war. A successor to the failed League of Nations, the U.N. – originally comprising 55 member nations – had greater power to compel international norms. The Soviets nearly backed out, but Stalin sent Molotov as a representative at the last minute. Truman addressed the conference on the closing day.

At 5:29 a.m., the U.S. Army detonated the world’s first nuclear weapon. The test was code-named “Trinity.” “The Gadget” was a plutonium device. Its yield was between 15 and 20 thousand tons of TNT. Officials downplayed resulting radioactivity. The test site was located in New Mexico’s Jornada del Muerto desert.

Truman met with Joseph Stalin and Winston Churchill in Potsdam, Germany to discuss the political future of postwar Europe. He was unaware of Roosevelt’s growing distrust of Stalin. Now, the Soviets were breaking agreements made at Yalta. They installed a puppet government in Poland while other Allies were denied access. Though untested, Truman felt confident. He wrote Bess that he got what he wanted most - Soviet support in the war against Japan.

Truman’s decision to use atomic bombs on Hiroshima and Nagasaki is still controversial. Some credit Truman with ending the war and saving thousands of lives. Others believe Japan’s defeat was certain, the bombs savage and unnecessary. The technology was new. Radiation hazards and casualties were vastly underestimated. The bombs established short-lived American atomic weapons dominance. They also brought in a new era of global anxiety. The U.S. now had the means to obliterate the human race. Soon it would not be alone.

When the Enola Gay dropped a uranium bomb, nicknamed “Little Boy,” over Hiroshima, 70,000 people were killed instantly. Tens of thousands more later died of injuries and radiation poisoning. The B-29 bomber was flown by Col. Paul Tibbets. Hiroshima was targeted because it was a center of military production, and the weather patterns that day were favorable to the mission. President Truman was returning from Potsdam on the USS Augusta when the bomb was dropped.

A second atomic bomb was released on Nagasaki from a B-29 bomber Bockscar, piloted by Major Charles Sweeney. Called “Fat Man,” it was a plutonium bomb like the one detonated in the Trinity test. 20,000 people died instantly. Tens of thousands more died in the weeks that followed. Firebombing campaigns continued. Japanese leaders argued over their next steps.

On August 15, 1945, Emperor Hirohito accepted the terms of the Potsdam Declaration in a recorded statement. Some Japanese military leaders tried to steal the recording in a coup but failed. Hirohito’s statement was broadcast throughout Japan. It was the first time the Japanese people heard his voice. He did not use the word “surrender.” The United States did not try him for war crimes. He was retained to forge a new ally from a foe. The instrument of surrender was signed aboard the USS Missouri in Tokyo Bay on September 2, 1945.