Isaac Adkins (1790-1854), a native of Montgomery County, Virginia, and resident of present-day Wayne County, West Virginia, settled in the large bottoms located across the river from the mouth of Harts Creek between 1824 and 1827. Adkins and his wife Elizabeth (called "Betsy") occupied a two-story log cabin with their five children. By 1850, Isaac was the wealthiest resident of the Harts Creek community. He was the second-largest slave-owner in Logan County. His plantation, situated on the east side of the Guyandotte River, included all of the present town of Harts and extended as far away as the present-day towns of Ferrellsburg and Atenville. Adkins and his wife are buried on the hill near their former home. A slave cemetery is located adjacent to their graves. 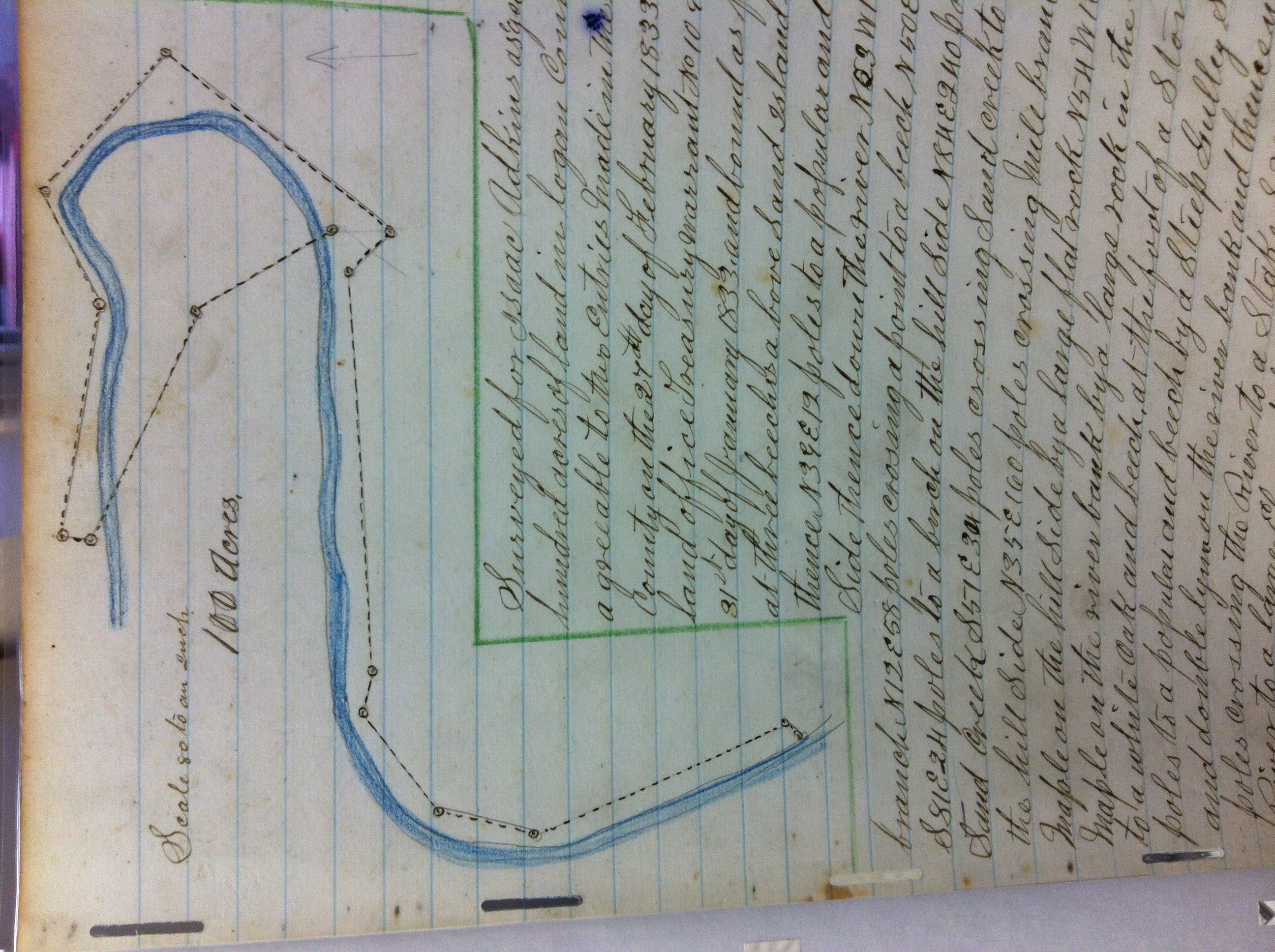 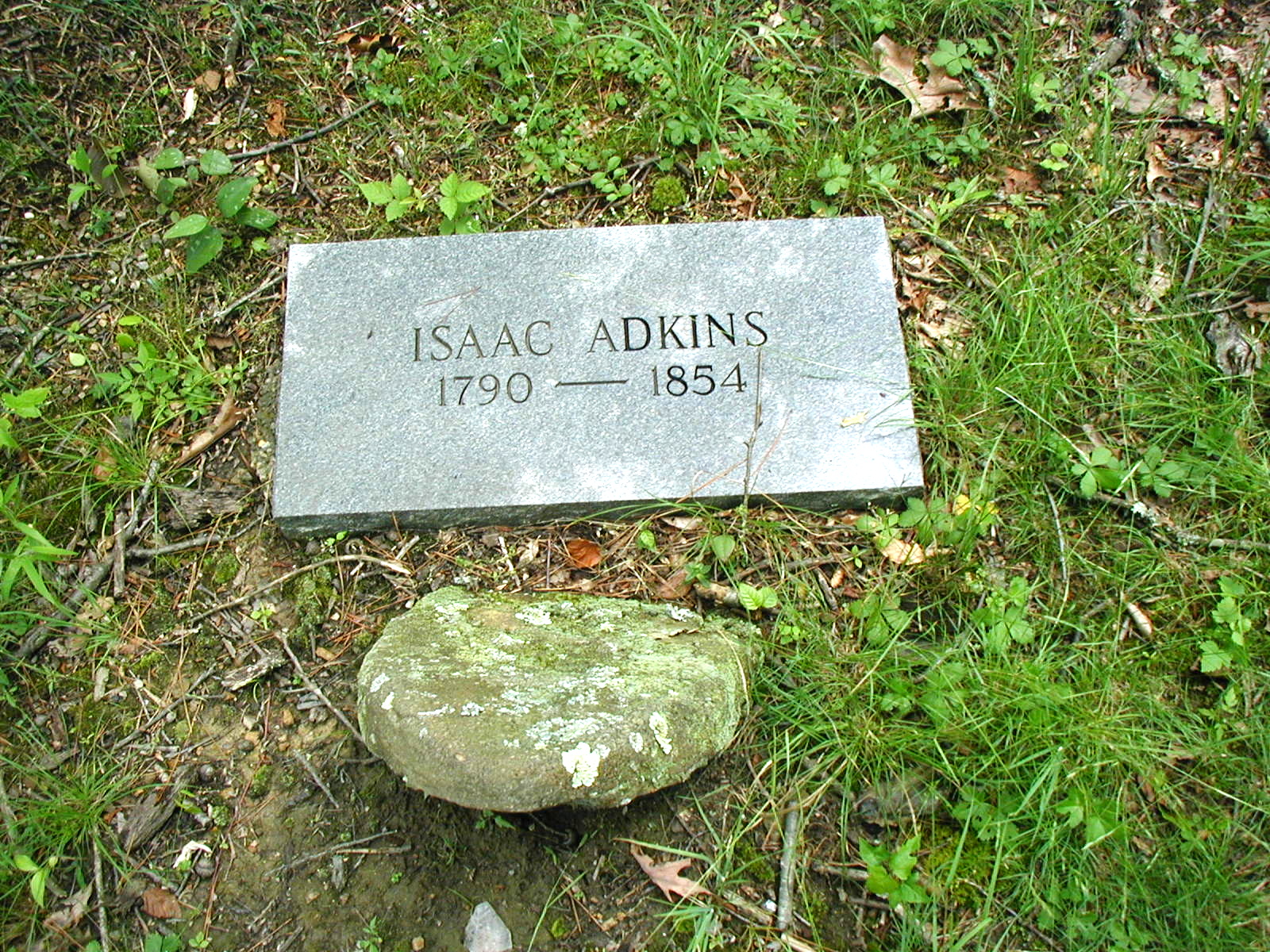 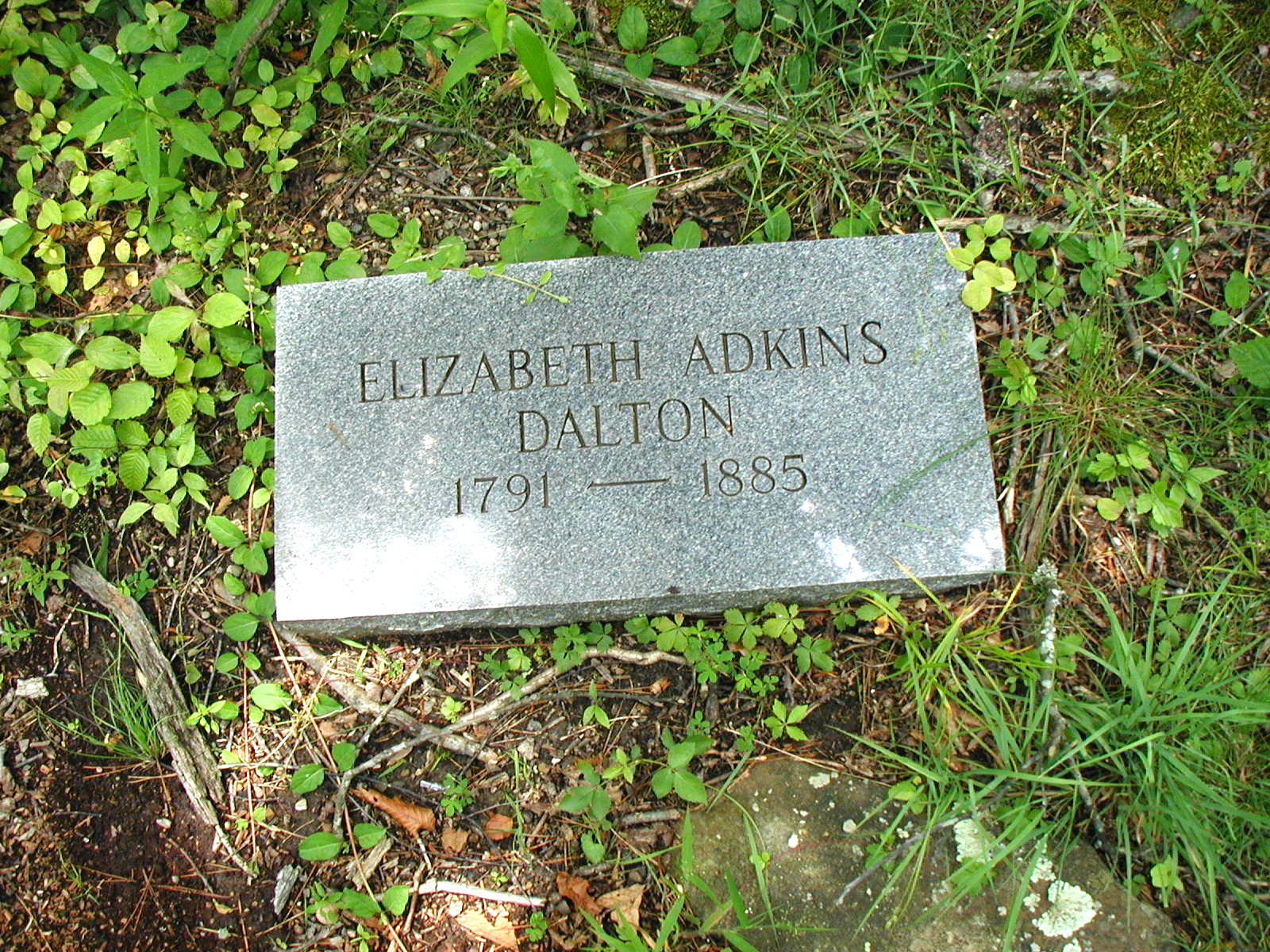 Isaac and Elizabeth Adkins graves, with the slave cemetery just in the distance. Photo by Brandon Kirk. 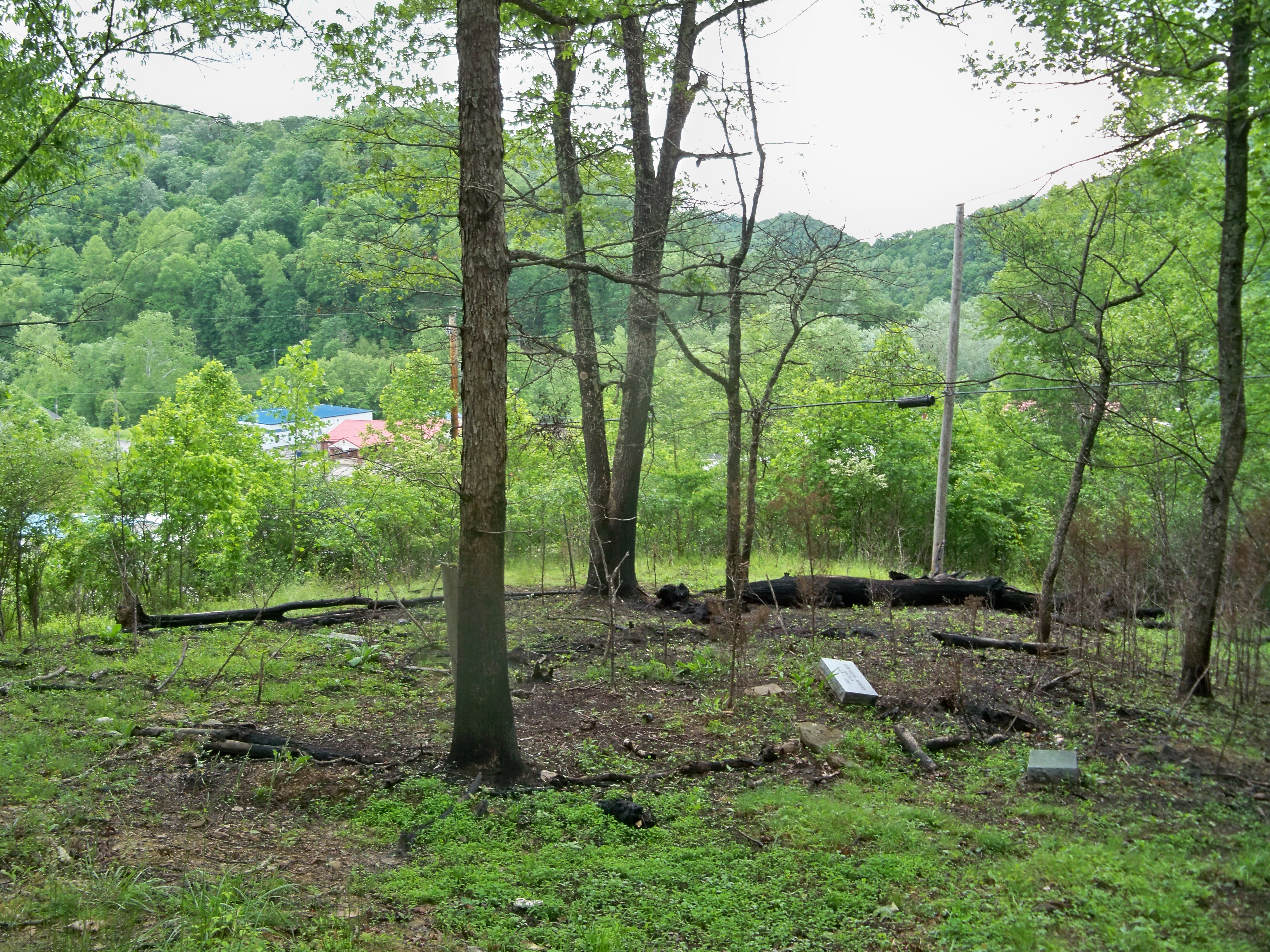 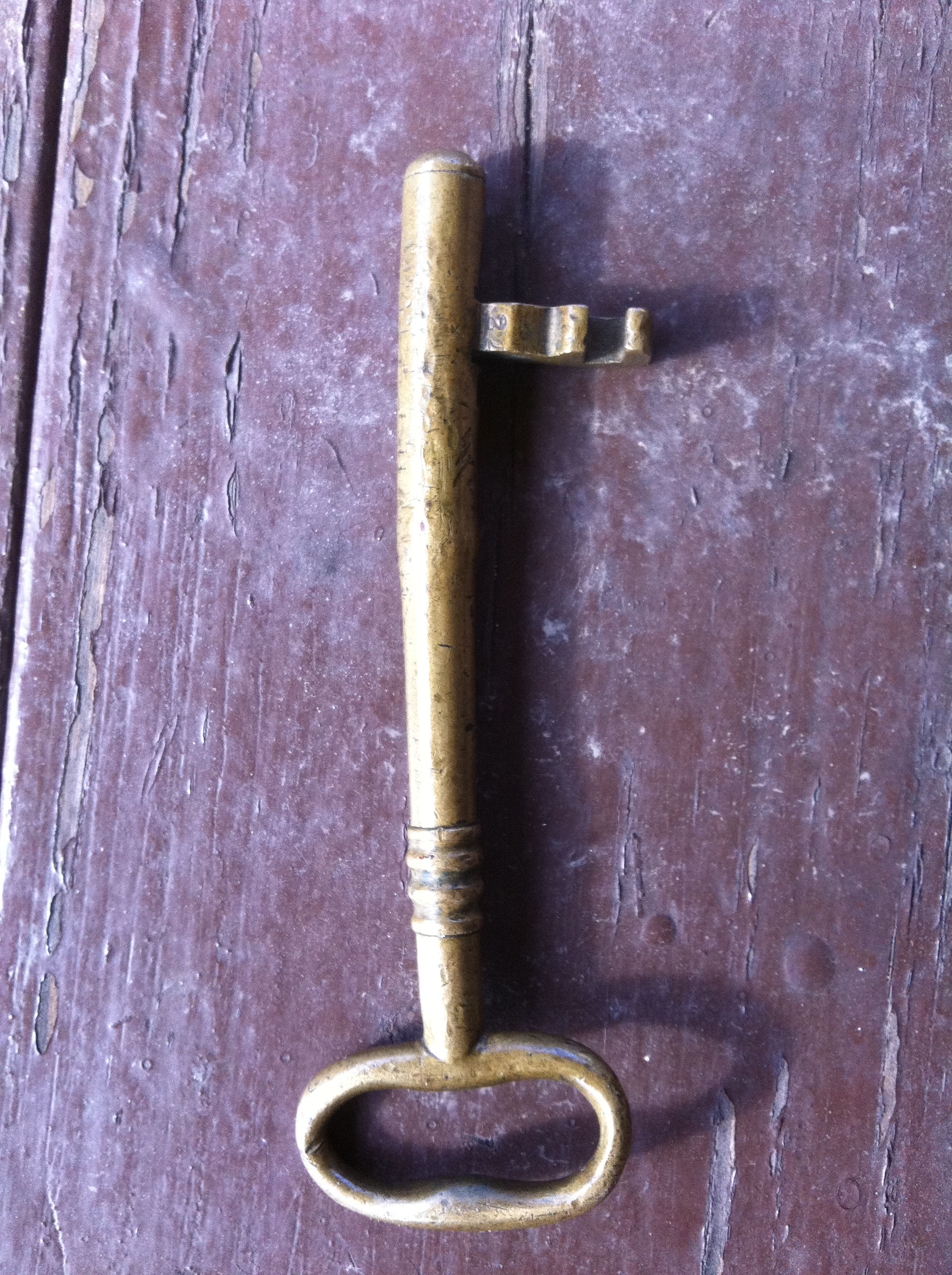 Settlement: Between 1824 and 1827, Isaac Adkins settled across the Guyandotte River from the mouth of Harts Creek in what was then Logan County, Virginia. Isaac occupied a two-story log home that faced the river. In 1830, Isaac owned one slave; in 1840, he owned 4 slaves. In 1830 and 1840, he was the community's only slave-owner. In 1850, he and his brother Elias served as the community's only slave-owners. Isaac was one of the largest slave-owners in Logan County. In 1850, he owned $4700 worth of real estate, making him the community's wealthiest resident. Prior to his death in 1854, the State of Virginia had granted 720 acres to him. Isaac died while hunting in the mountains near his home. The family found him sitting against a tree, resting peacefully. Isaac and his wife Betsy are buried near their slaves. Isaac is the namesake for Isaac Adkins Shoals and Isaac Adkins Branch. Following his death, Betsy remarried and his son Henry sold the farm to his first cousin, Aaron Adkins.

Oral History: “He’d been down somewhere and he’d been down at the Bend of the River there with some of his friends. And he was gone all day and he never come home that night. I don’t know how they got the news but any how Sookie come down here and all of ‘em, you know. His dog come home. Well, they went back… I don’t know if the dog took ‘em back or not. But any way, they started over that a way and come to the top of the hill there at Big Branch over to Sand Creek, [he was] sat down beside of a tree and was dead. They didn’t know if he’d had a heart attack or not.” [Source: Rinda (Davis) Adkins [born 1884], interview by Billy Adkins, Harts, WV, 27 October 1977.]

Today: The former location of the Isaac Adkins plantation house is now occupied by the Harts Volunteer Fire Department. The location of his slave quarters is unknown.

Fred B. Lambert. The Llorrac: The Yearbook of the Carroll High School of Hamlin, West Virginia (Hamlin, WV: Faculty and Students of 1926).