The Bridge of Lions

The Bridge of Lions is a spectacular work of art located in the heart of a small town called St. Augustine. It connects Anastasia Island to down town St. Augustine across the Matanzas Bay. St. Augustine itself has a ton of history behind it, and was actually the first continuously inhabited city in the entire United States. With that being said, it is very interesting to learn about the ancient past behind the artifacts in this tiny town. In 2006, the city decided that the bridge needed to be closed for reconstruction. The cities greatest challenge with this project was conserving the original elements of the historical landmark. During the whole process, a temporary bridge was built next to it. The parts of the bridge were put in storage including the two lions, “Faithful” and “Firm” for four long years. Finally in 2010, the bridge was complete. It now stands strong while still maintaining the original 1927 look. 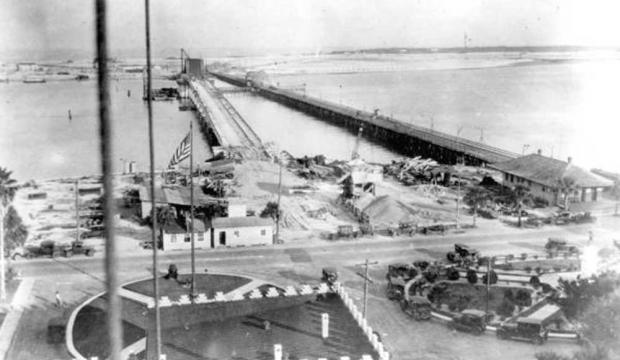 The Bridge in the open position 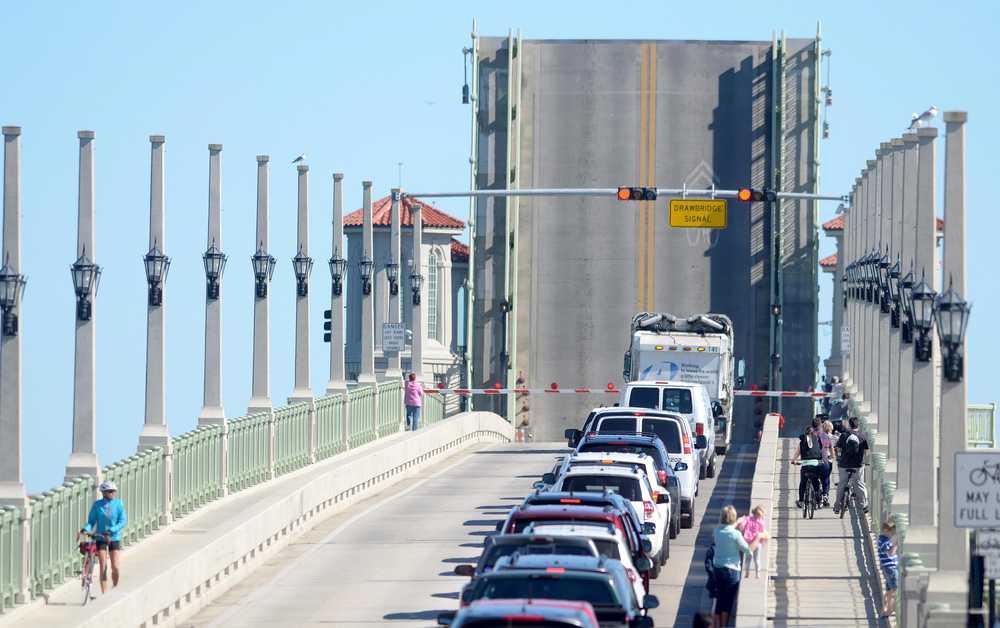 One of the Lions 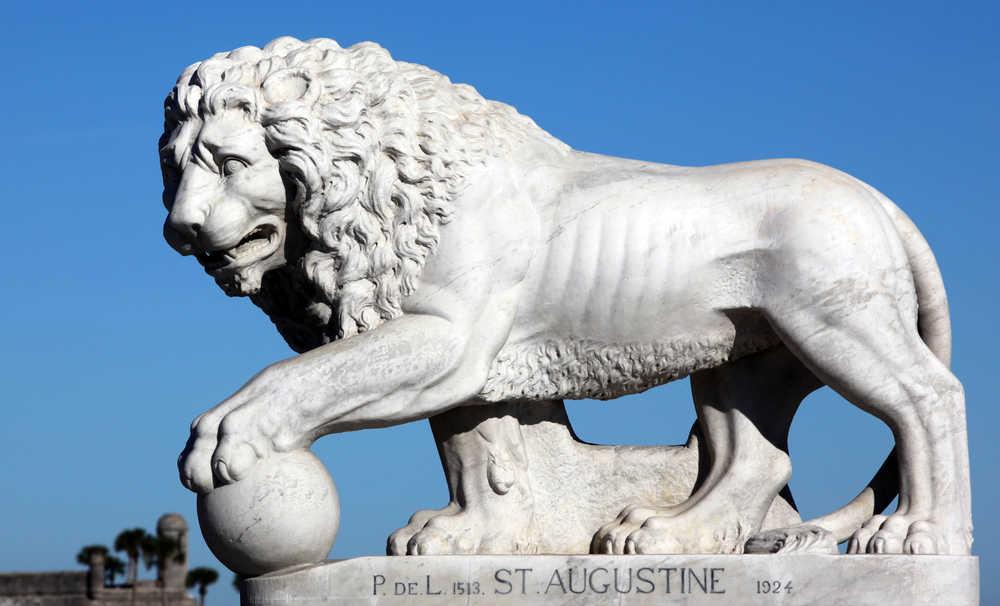 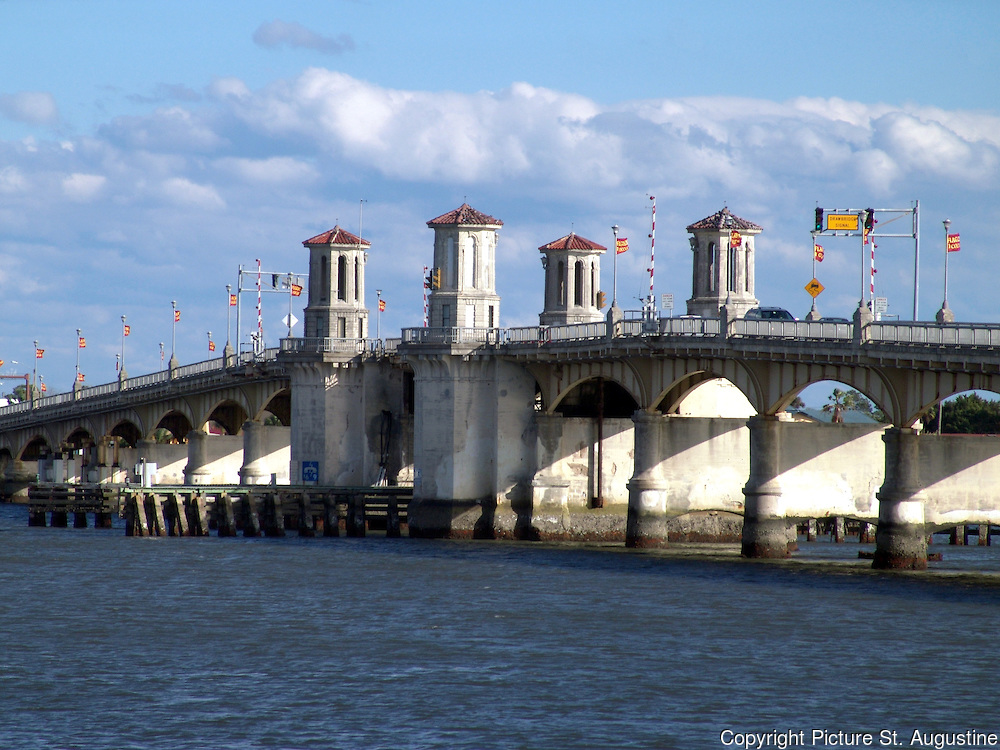 In the early 1920’s, before the Bridge of Lions was created, stood a small crossing. This bridge was made of wood. “It was a low-rise trolley bridge that could be opened to allow ships through and a toll was charged. It was alternately called ‘The Bridge to Anastasia Island’ and ‘The South Beach Railroad Bridge’.” After numerous times of the bridge breaking down, a man named Henry Rodenbaugh stepped in to design a more reliable bridge. With the Florida land boom erupting in the 1920’s, St. Augustine needed a sturdy way of passage across the inter-coastal waterway. St. Augustine is a huge tourist destination because of its extensive history, so the bridge was crucial in the on rush of new people being introduced to Florida. He also wanted it to be a work of art. He hired J.E. Greiner to design the bridge, but Henry Rodenbaugh is known as “The Father of the Bridge of Lions.” Construction began in 1925 and was completed in 1927. Because Rodenbaugh wanted this structure to be an eye-opening masterpiece, the bridge cost ten times more than other bridges around its time.

Construction on the Bridge of Lions started in 1925 and finished two years later. This structure replaced the old bridge and connected St. Augustine and Anastasia Island. Two marble lions were mounted on each side of the Bridge to symbolize the guarding of St. Augustine (Cooper). With length of 1,545 feet with two lanes, this bridge crosses over the Matanzas River.

The Bridge of Lions gets its name from the founder of St. Augustine, Ponce de Leon. Leon means lion, which is why the bridge is guarded by lions. The lions were donated by Dr. Andrew Anderson and Henry Flagler (St. Francis Inn).

Because Henry Flagler brought so many people to Florida for tourism, he knew they would need a place to stay.  Henry Flagler began building the Hotel Ponce de Leon in December 1885. This hotel attracted many rich people to visit St. Augustine and Anastasia Island. To go from one side to the other can only done over The bridge of Lions. As more people came, it was decided to widen the bridge to better the traffic flow. Dr. Andrew Anderson was apart of the fast growing St. Augustine. He stated, “The past year has witnessed a revolution in our City which no one could have anticipated. Hundreds of thousands of dollars have been spent and are being spent in our midst…The crowning enterprise, the building of the Ponce De Leon Hotel, will make St. Augustine famous… Our city bids fair therefore to become the Nice, as well as the Newport of America” (Graham, 96). Population growth in Florida continued after the Flagler era.

During the construction of The Bridge of Lions, the Florida Land Boom happened. The land boom brought the use of automobiles such as Aurora, Metz, Kritt, Regal, Peerless and Empire. More cheap cars were made quicker because of a fluent assembly line. This allowed easy transportation to the tourist state of Florida (Gannon, 301). As Florida became more popular with automobiles, the decision was made to widen the two lane road of the bridge to four lanes. This would allow traffic to flow more smoothly as tourist entered and exited St. Augustine. St. Augustine is one of the top rated tourist visiting places in Florida.

The bridge is called the Bridge of “Lions” because at the west end stands two replicas of the Medici Lions made of Carrara marble. The origin of the Medici Lions stems from the Villa Medici in Rome, Italy. They were actually a gift to the town from Dr. Andrew Anderson, a previous mayor of St. Augustine. The statues were made by Romanelli Studios in Florence, Italy. In 2015, two new lions were donated by the Schau family and placed at the east end of the bridge. The names of the new lions are Pax y Peli, which is Latin for peace and happiness. The names of the original lions are Fiel y Firme, Latin for faithful and firm.

The Bridge of Lions draws attraction to the fort in St. Augustine and many shops there as well. Ponce De Leon statue stands in the middle of the square in St. Augustine. Davis Shores is  a residential spot close to the bridge. This was a popular spot to stay to get the full experience of St. Augustine. The sun sets right over the bridge which allows for a beautiful view to end the night (Griffin).

The lions were taken away during reconstruction for six years. It was a big process when the workers brought “Firm” and “Faithful”, the two marble lions, back to their rightful place. The process was during the middle of the night at two am. The construction workers chose the less busy time that the bridge would be used. The sheets covered lions were lowered with a crane one by one to their platforms. After both lions were put down, the lions were cleaned by sculptors to fix up the damage that was done to the lions. (Griffin)

“[The] project had also received the following awards: 2011 National Recognition Award from the ACEC Engineering Excellence Awards, Award of Merit in the Reconstructed Category from the National Steel Bridge Alliance Prize Bridge Competition, and ranked Fourth in Roads & Bridges Top 10 Bridges of 2010.” (RS&H)

Gannon, Michael. The History of Florida. University Press of Florida, 2013.