The Embroiderers’ Guild of America (EGA) was founded as a branch of the Embroiderers’ Guild of London in 1958. In 1959, the organization was officially incorporated in New York City. The headquarters of the EGA later relocated to Louisville, Kentucky in 1985. After moving to various buildings in town, the EGA settled in its present location in 2006. A year later, the EGA opened its Embroidery Museum & Resource Center to the public. Items on display include examples of Blackwork, crewelwork, samplers, thread “paintings,” and tapestries. 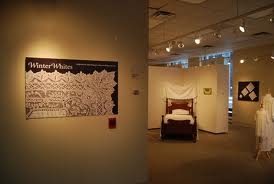 The seed for the Embroiders’ Guild of America was planted when three women, Dorothy Babcock, Margaret Parshall, and Sally Behr Petite, began a needlework class in Babcock’s New York City apartment in 1957. One year later, the class grew to twenty-seven members, and they formally established themselves as the American branch of the Embroiderer’s Guild of London, later adopting the name Embroiderers’ Guild of America (EGA). The organization moved its headquarters to a room on Lexington Avenue in 1961 and began a reference library for members. In 1970, the EGA began publishing a quarterly magazine for members called Needle Arts. That same year, the EGA split from its London counterpart and became its own organization.

The national headquarters for the EGA moved from New York to Louisville, Kentucky in 1985. The organization was originally housed in the Norton Building, with the fifth floor dedicated to an Educational Resource Center, complete with a library, gallery, and collection on display. Four years later, the EGA moved to the Brown Hotel of Louisville and opened a small gallery to the public. After another move, the EGA opened the Embroidery Museum & Resource Center (EMRC) in 2007. Though it only had two exhibits at the time, the museum has since grown.