The Plaza Tower (once referred to as Crescent City Towers and Crescent City Residences) is the third tallest building in both the city of New Orleans and the state of Louisiana. Used to house some businesses and mainly residences, this building was completed in 1969. However, due to neglect by the city and safety and health issues, the building was closed in 2002, slowly deteriorating more since then, especially when it was heavily damaged by Hurricane Katrina in 2005. Since 2007 efforts were underway to buy and restore the building to it former glory. A well known landmark of the city's skyline, the building was bought in 2014, with plans to prepare it for either a convention center or residences, with an emphasis on the river front view. 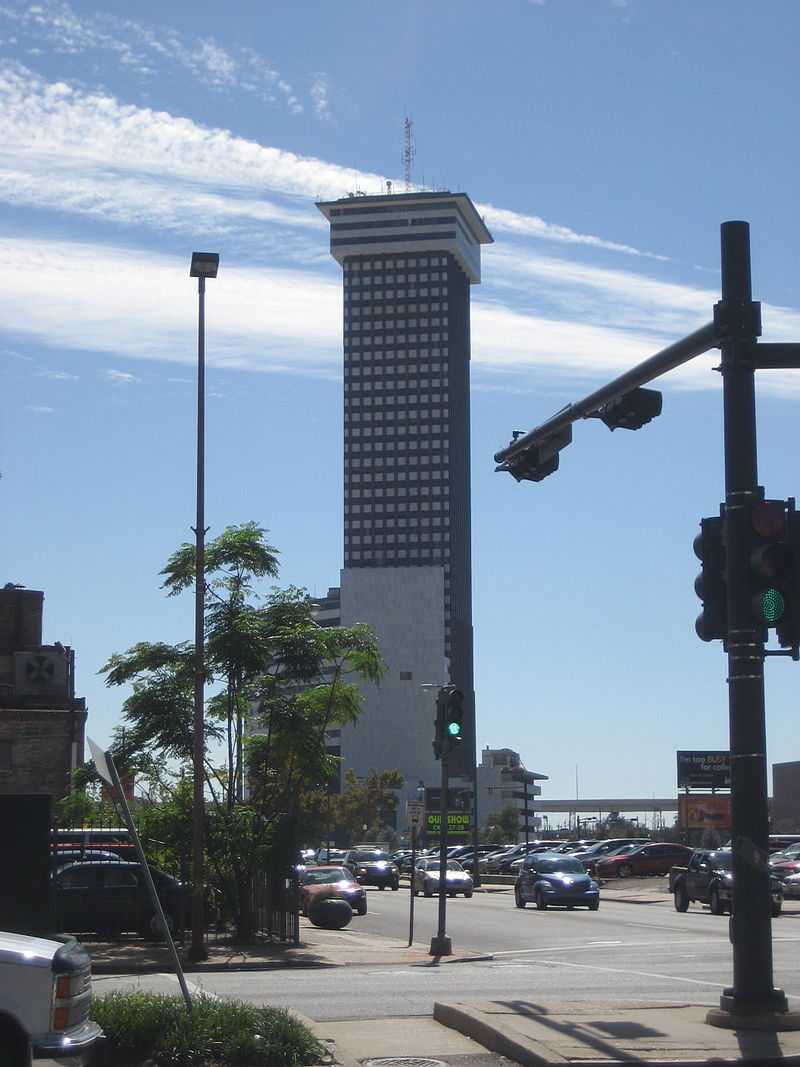 Aerial view of the tower The Tower Plaza, in the background, under construction. Circa 1966-1968 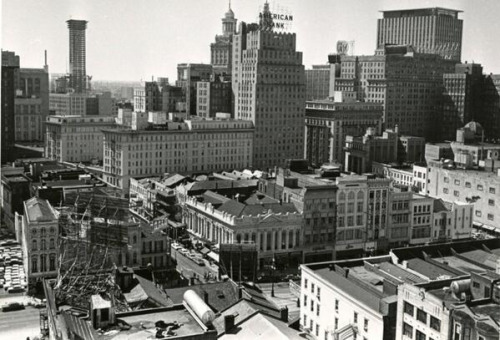 On site photo of construction on the tower with sign advertising the building. 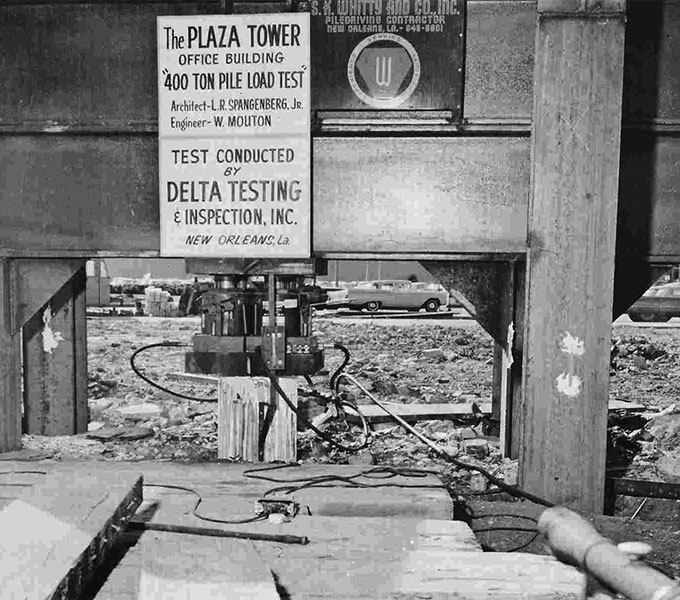 Plaza Tower (for a time dubbed Crescent City Towers and Crescent City Residences in a failed proposed redevelopment scheme) is a 45-story, 531-foot skyscraper in New Orleans, Louisiana, designed in the modern style by Leonard R Spangenberg, Jr. & Associates. Located in the Central Business District (CBD), it is the third tallest building in both the city of New Orleans and the state of Louisiana. Construction of the Plaza Tower began in 1964, but halted in October 1966. The property was bought out and construction resumed in 1968. Upon completion later that year, the Plaza Tower became the tallest building in New Orleans and Louisiana, a record it held for four years when One Shell Square surpassed it by over 160 feet.
Along with the World Trade Center on the Mississippi riverfront, the Plaza Tower marked the beginning of modern high-rises in New Orleans. The building has always held a prominent place in the city's skyline, even after the 1970s building boom on along Canal Street and the 1980s boom along Poydras Street. This is due to both its unique design, particularly its "mushroom top," and its location on the extreme edge of the CBD. The Plaza Tower was originally designed primarily as an office building with some residential space on the upper floors. Upon completion of the tower, very little residential space was made available. By 1984 the remaining residential apartments were made into offices.

In 2001, tenants began to publicly criticize the building's owners for ignoring worsening conditions in the building. Claims were made that a lack of proper maintenance had led to exposure to asbestos and toxic mold. Several class action lawsuits were filed by workers against the owners and managers and their own employers, the Louisiana Department of Social Services and Louisiana Department of Health and Hospitals. In 2002 approximately 700 Louisiana state and New Orleans District Attorney's Office employees relocated en masse to offices on Common Street. Since that time, the building has sat sealed off and unused.

The building has been unused since 2002 because of environmental problems such as toxic mold and asbestos. In March 2005, the Plaza Tower was purchased by Giannasca Development Group LLC for $4 million. The Giannasca Group planned a $120 million renovation to convert the office tower into a 197-unit condominium tower with an entirely new facade. However, after damage due to Hurricane Katrina, the group was involved in faulty appropriations of insurance money that had been issued after the storm, causing the group to sue one another and default on the mortgage.

In 2007, the building was auctioned off and purchased by Plainfield Asset Management for $583,000. In January 2009, mold remediation work began on the structure to rid it of asbestos and other problems. The work involved stripping the entire interior of the building, including removing all of its walls and ceilings. The work was estimated to cost $10 million and was expected to take one year to complete. On July 20, 2011, WWL TV of New Orleans reported that the building was up for auction, with a minimum bid of $250,000, and was bought by Tony Anderson. In 2014, developer Joe Jaeger bought the building but has not revealed any plans for redevelopment. Jaeger, whose company is The MCC Group, is also part of a team pursuing a deal with the Ernest N. Morial Convention Center to lead a $1 billion development on 47 acres of vacant riverfront land near the power plant.

Past proposals for the tower:

For several years in the late 2000s a plan was in the news to redevelop Plaza Tower as residential space under the name "Crescent City Towers" or variations on that name.
A plan claimed to begin by gutting the building down to its superstructure, both on the interior and exterior, required because of the building's history with asbestos, toxic mold and water leaks. The proposed new facade would feature a neomodern look, making extensive use of glass and staggered balconies, to provide the units with views of the New Orleans skyline and the Mississippi River. Once complete, the building would have included amenities such as a gourmet restaurant, spa, fitness center, indoor pool and retail space. The renovation of an adjoining building containing a 350-space parking garage and several townhouse units was also planned. The redesign was originally proposed under the name Crescent City Residences.
The architectural team behind the redesign was composed of Williams Architects of New Orleans and Marks Thomas Architects of Baltimore. Dorian M. Bennett Realtors Inc. had exclusive rights to sell the 350 units, with prices starting at $350,000. Unit sizes were determined, but prices were planned to be in the range of $450 per square foot, similar to prices in the French Quarter, and about $100 per square foot higher than the nearby Warehouse District. In November 2005, Giannasca Development Group announced it had secured $24 million to start the redevelopment project. A construction timetable was being developed in light of delays and logistical issues since Hurricane Katrina, with estimates for an opening date in 2008.
In spring 2006, modified plans were released reflecting changes aimed at addressing post-Katrina concerns. This redesign includes glass designed to withstand 200 mph winds, a self-contained electrical generator, and an internal water supply, which developers say could make the building self-sufficient for three to four weeks. The external design was also changed to a cleaner glass and steel design, removing the needle point and multiedged surfaces of the original design. This new exterior was to consist of gold-tinted wall to wall glass and maroon steel. The price of the project increased from $100 million to $120 million while the number of units has been reduced from 350 to 197. These units were to run from 1,080 square feet starting at $450,000 to several 3,000-square-foot units costing several million dollars. Three quarters of the units were to have only one bedroom. The project also saw a slight name change to the Crescent City Towers.
In July 2007, the owners defaulted on the mortgage and the Plaza Towers was put on the auction block. Howard Acquisitions, LLC already held the mortgage on the building. Their winning bid protects their investment and gives them full control over the high-rise. The new owners, Plainfield Direct, are remaining tight-lipped about their plans for the building.
On December 19, 2007, Plainfield Direct paid the City of New Orleans $608,000 in back taxes and announced plans to spend $10 million on environmental remediation. This work was set to begin immediately in the parking garage and building annex, work was to begin in the tower in early 2008. Following the remediation work, Plainfield was to partner with developers to put the building back into use. Such plans were not met with success. In July 2011, the still vacant building announced to be up for auction with bids due by 20 September.